I write this on a train, returning home after four days in New York City. In the last five years, I have toured three high school classes through the Metropolitan, the Cloisters, and the smaller museums of Manhattan, like the Morgan and the Frick. While El Greco and Fra Angelico’s Adoration scenes are true and beautiful, nothing at the museums is as sensually overwhelming as New York City itself. Granted, St. Paul commends whatever is noble, whatever is of good report and so forth in his epistle to the Philippians, a passage which came to mind often as I walked through the “European Art 1200-1800” rooms. But the Apostle neither praises nor censures nor even mentions “whatever is overwhelming.” I have tried, before each trip to New York, to prepare myself for Manhattan. In the same way the hot summer months naturally put one into the Dionysian frame of mind necessary to enjoy a Michael Bay film, some manner of intellectual and spiritual posturing is helpful before submitting yourself to New York. To that end, last week I watched Chantal Akerman’s News From Home.

In 1971, at the age of 21, the Belgian filmmaker moved to Manhattan and lived there for two years during which time her mother sent her many short, impassioned letters describing the life of the family and begging her daughter to write home more often. After she moved back to Belgium in 1973, Akerman directed Jeanne Dielman, 23 quai du Commerce, 1080 Bruxelles, a film about a prostitute which is sufficiently violent and realistically sexual such that the sensitive souls at Criterion have preserved it. In 1976, Akerman returned to New York with a camera and filmed some of the places she had previously frequented, then strung the footage together and made vocal recordings of the letters she exchanged with her mother, finally overlaying the images with the correspondence. In 1977, News From Home was finished.

The results are neither as conventional as Wim Wenders Tokyo-Ga, nor as enigmatic as Chris Marker’s San Soleil, though both of those documentaries dovetailed out of Akerman’s camera. I hesitate saying News From Home is experimental given the immaturity of the genre. The term “documentary” was not commonly used until the late 1920s, and while such films have always occupied a small place within the cinematic world, I am not confident the typical filmgoer would have distinguished a news real or a travelogue from a documentary until the late 50s.  At the same time, News From Home carries itself like an avant-garde work. Unlike most Hollywood films, say, the narrative lacks an obvious entry point. While none of shots are blurry, I spent the first half hour of the film trying to figure out what I was being shown, and why. Why these images? Why this order? Why are some shots long and other short? Conventional films which follow a familiar structure with venerable archetypes are quickly set up characters and establish rules so the plot can begin moving forward as soon as possible; after you have been strapped in to the roller coaster, waiting an additional hour for the ride to begin will not make the cars rise to greater heights before plummeting, because the path and speed do not vary from one day at the carnival to the next. News From Home is less a ride than a maze with a hundred entrances, the first forty or so of which quickly reach a dead end. Akerman begins by showing us a few cars slowly pass by a clean but empty alley. She shows us subway stops, common people walking down the street, an obese man sitting in a folding chair next to a nearly deserted street corner. All the expected images of New York are absent— no splendid Art Deco architecture, no Central Park, no Carnegie Deli. We are not treated as tourists. Neither are we treated as residents who know the very fine out of the way monuments, gardens, chefs. Akerman does not assume we are poets who can find what is glorious in the mundane. She doesn’t give us American Beauty’s blowing plastic bag of beauty. What slowly emerges in shots of sub riders gazing absently at the blur beyond the window is Akerman’s hypnotized reflection in the glass. 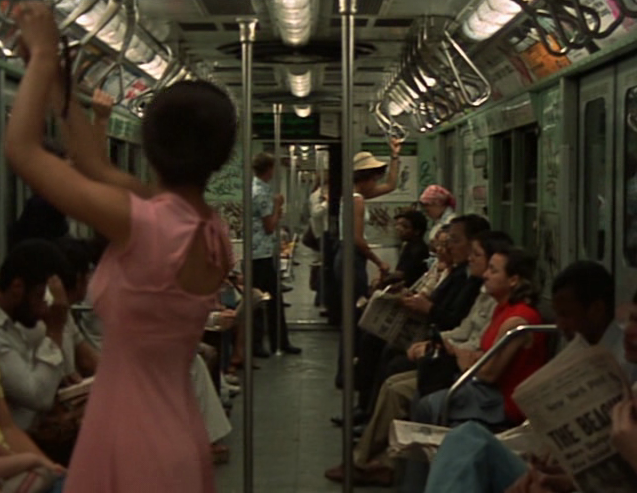 Her mother writes every few days, often enclosing a twenty dollar bill or hundred dollar check, desperate to hear Chantal tell her she is safe. Her mother is sometimes desperate, sometimes accusatory. When four consecutive letters from the elder Akerman pass without a response, the viewer begins to suspect that Chantal is dangerously caught up in her own thoughts, or else hiding images (the walk up to a paramour’s apartment, perhaps?) which might explain her disinterest in consoling her worried mother. When Chantal writes, she is evasive and vague, giving flat and predictable facts about how busy she has been with mature responsibilities. When one of Chantal’s relations in Belgium becomes ill, perhaps near death, the images of New York do not become more urgent or anxious or tragic. Even when Chantal’s letters lapse into sentiment, the city so steadies her and draws her in, we are slow to trust the letters’ authenticity. I was often reminded of The Book of Strange New Things while watching. News From Home is about the alienating capacity of the city— not simply the anonymity it offers, but the Major Tom-like detachment. The city nearly attains to divine impassibility. The city’s absolute disinterest in anyone’s private life creates an atmosphere of objectivity and amorality. The film ends with Akerman’s departure from New York. For seven minutes, a boat silently sails out into the Atlantic and the Manhattan skyline rises. We are momentarily relieved, though I couldn’t help but to notice how umbilical the parting wake appeared and that cord ran all the way back to the harbor.

A return to one mother means a departure from another.