Welcome To The Good Life: Italy Unpacked (Not Rated) Reviewed by Joshua Gibbs on September 1, 2015

As a classics teacher, “What’s Italy like?” is a question I can answer with a reasonable degree of certainty, provided you want to know what Italy was like hundreds of years ago. However, there is a vast chasm between “What’s Italy like?” and “What’s Italy like in the summer?” and the answer to the first question treats on geography and politics, religion and climate, but the second question requires something less abstract and more incarnate.

“What’s Italy like in the summer?” wants a glass of wine and a narrow dusty avenue to saunter down. With such a question on the line, “book smarts” becomes just another way of saying “ignorant.”

At the start of August, I and my wife and our two little daughters spent several weeks in preparation for Italy Day, a cultural holiday we invented as an excuse to go broke at gourmet grocery stores, spend hours in the kitchen, and visit the Renaissance rooms at the local art museum. In those two weeks, we checked out an armful of books about Italy, researched cuisine, and gazed at photos of Il Bel Paese, although nothing whetted our appetites for the place quite like the BBC2 travel documentary series Italy Unpacked.

Italy Day came and went, though I’ve stayed with Italy Unpacked. The series follows British art critic Andrew Graham-Dixon and Italian chef Giorgio Locatelli as the two travel from region to region, city to city, farm to farm, and Graham-Dixon comments on art and architecture while Locatelli discourses on regional history and agriculture while cooking local fare. The genius of the show lays in the choice of hosts. Locatelli is everywhere at his ease and gestures to any farm or hill in the Boot with the confidence of a man surveying his back yard for the hundredth time. Andrew Graham-Dixon knows little of the food but everything of the art, and so the two men are ever filling in narrowing gaps in one another’s knowledge of everything Italian. Both are highly accomplished in their respective fields, and their fields overlap just enough that they would probably finish one another’s sentences if they were twins in a 50s screwball comedy. Art history is world history, but food history is world history, too. Anthropology, agriculture, aesthetics, art and manners coalesce into a single, simple, poetic discipline Giorgio and Andrew simply call “living.”

They do not putter around the towns they visit, but neither do they race to see everything. Locatelli wears his long, wavy hair around his face like a man who has often gone looking a barber but always found something more interesting to do on the way. Graham-Dixon both looks and sounds like a better-fed Steve Coogan, ambling briskly from one landmark to the next in a spirit of reserved but genuine excitement and fondness. The hosts of Globe Trekker are affable but daffy and have little more than Wikipedia expertise. Rick Steves is too dowdy (and cargo-shortsy) for my taste, and never seems capable of cutting loose.  On the other hand, in “The Art of the Feast,” the first episode of the series, Locatelli jokes about how Bologna became known as La Grassa (“The Fat”) and then later good-humoredly gestures towards a portly pasta seller. At the University of Bologna, in a room set apart for the science of anatomy, both men seem just a touch squeamish when regarding the skinned penis of a flayed male statue. At the same time, the hosts are suitably sublimated by the mere fact they are standing in Dante Alighieri’s alma mater, the oldest university in the world. They make light of one another’s impatience or ostentation, but the humor doesn’t seemed canned. I’ll wager the cutting room floor absorbed better ad-libs and jabs than the whole of The Trip to Italy, and that was already a fine show.

The Unpacked wanderers hit up all the major cities and regions in Italy (with the exception of Rome, which they only regard from a distant Borgia garden), but tend to avoid what is obvious and overdone within those cities. Their goal is to have a good time, not to teach and certainly not to prepare us for the tour bus. With their own amusement and enjoyment as the real destination, the fleeting micro lectures Graham-Dixon delivers (comparing the fluidity of Mannerist art with a late 16th century obsession with fountains) seem unprepared and spontaneous, the thoughts of a man talking through an old fascination which seems suddenly new to him. 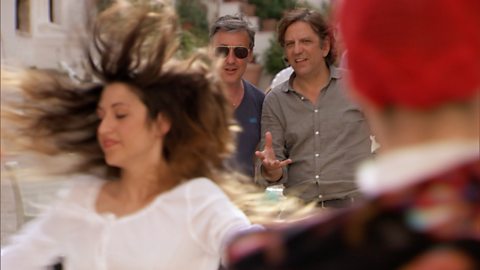 The best way to teach is for the teacher to keep himself enthralled, an old trick of the educator’s trade. Giorgio occasionally commissions Andrew for help preparing dinner, and Andrew taste tests celery and tomatoes and always finds them amazing, although given the lush environs from which said celery is harvested it’s all quite believable. The meals are often prepared and enjoyed in some private villa or the house of a friend, and while the scene quickly cuts after the fellows begin forking up buttery pasta, that cut is nearly as suggestive as the closing of a bedroom door or the slipping of a blouse strap from a woman’s shoulder. We’re left imagining these two geezers finishing an entire stuffed rabbit on their own while the stars come out. Locatelli talks with his hands, declares everything he loves “fantastic” (the stuff of fantasy, a Calvino story come alive, let us say), and while not a professor, he has a fine way of pronouncing this or that proper noun with a gravity that makes you involuntarily repeat it while you watch.

In the course of the school year I fully intend to test the show out on the upper school classes I teach, as I think the good life is uniquely represented in the series. This is a show for people my age, though. Italy Unpacked is for the thirty-something and forty-something. It is for the man, in particular, who sits between the predictably corporeal vanities of youth and the uncertainties of bad health which arrive with age. Neither host is fit for a hundred yard dash, and while Andrew wears a few well cut suit jackets, both fellows are far more concerned with repose and contentment than inspiring fashion envy. They’ve given up on looking amazing and taken up being amazed.

After an hour the show proves overwhelming even though no individual scene seems outlandish, although the Parma ham cellar wherein Giorgio Armani’s personal stash is uncovered comes close. When the credits role I am left with a profound desire to enjoy the world, but not a dissatisfaction with my own lot in life. I’ll never make it to Italy, never, for my fear of flying has grown so profound in the last several years I would have to turn down an all-expenses-paid month long Italian vacation. That fear makes the show endurable; for lack of money and lack of courage, I simply have to make my own Italy here. Aristocratic living has always relied upon such poetic logic. The good life of the landed gentry never existed to trample the spirits of the underclass, but to show them the kind of beauty and manners to which they should aspire. I’ll never make pasta like Giorgio, and I’ll never have that simple, intuitive friendship with color and line that makes Andrew the friend of every master painter who ever lived. But they make me want to try.