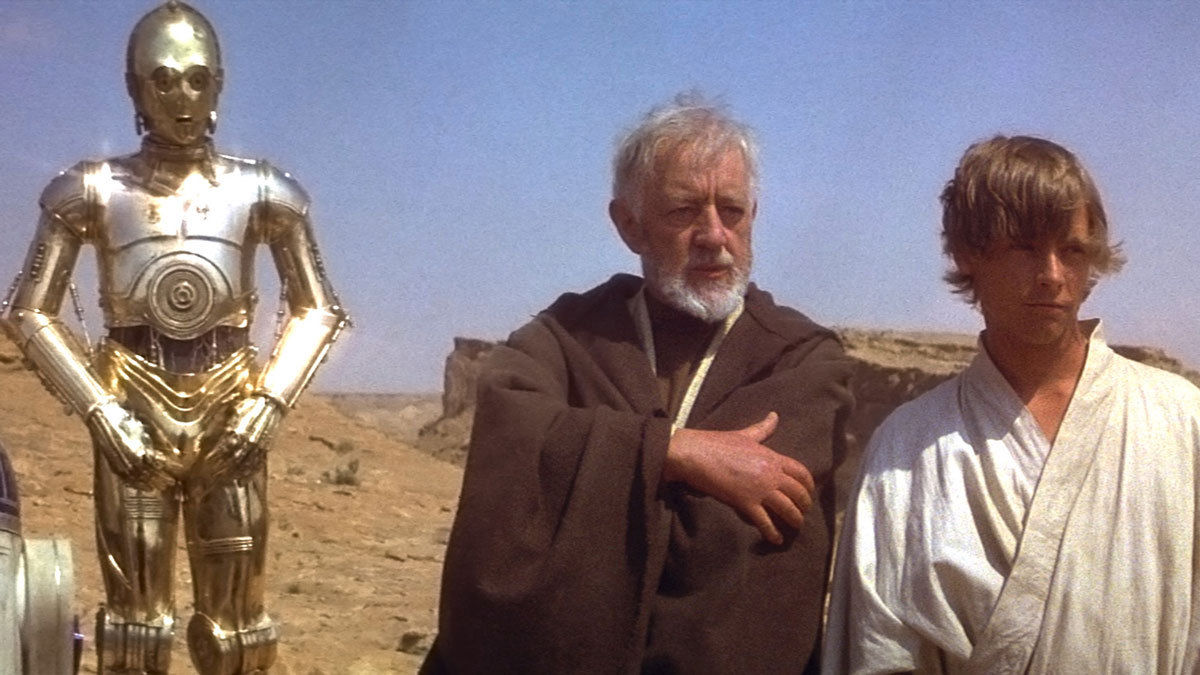 Over the next six weeks, Filmfisher will roll out a series of essays on all six of George Lucas’s Star Wars films. Each piece will be written by Timothy Lawrence as part of a senior film project he is completing at Biola University. We are kicking off this exciting series of essays with a brief interview with Timothy about Star Wars, his history with the series, and interpretive strategies for viewing the films.

FF: Timothy, you’re tackling an ambitious project in writing essays about all six of George Lucas’s Star Wars films. Is there anything new to say about Star Wars? When you’re approaching a film which our culture has more or less been continually ruminating on for nearly forty years, how do you say anything about the film which someone hasn’t already said?

TL: Star Wars is certainly well-trodden ground, and I can’t make any pretensions to novelty here. Most of the insights I offer will probably already have occurred to someone, somewhere. That said, I think the films, taken together, create a work that is near endless in its complexity, and I doubt that its depths can ever be exhausted, just as we haven’t given up on gleaning new insights out of the classics after centuries of study. 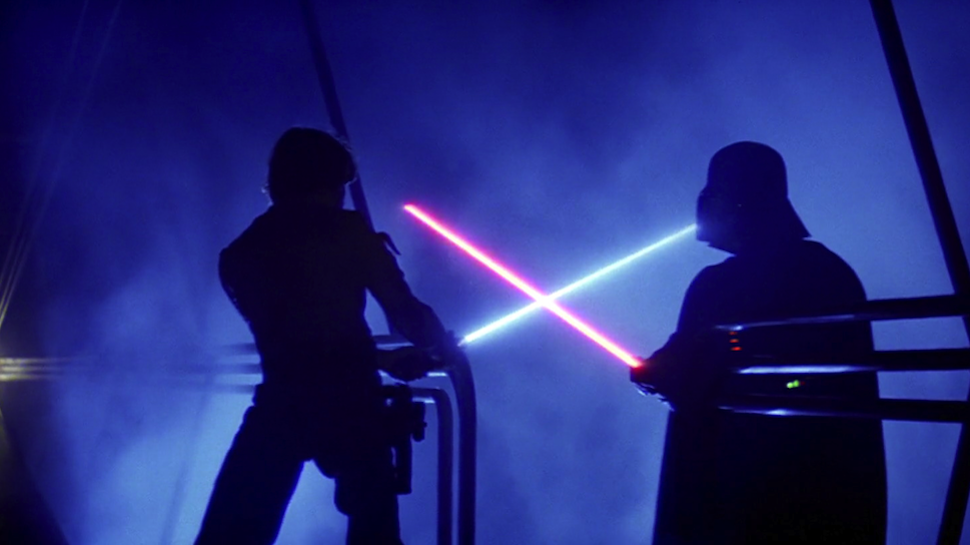 Much of the conversation surrounding the films has been content to gloss over their deeper meanings, and I hope these essays will be differentiated by their more academically minded focus on Lucas’ auteurship as an anthropologist interested in uniting classical storytelling traditions with modern psychology and cinematic influences. My goal is to do justice to the vastness of the well he’s drawing from, using that wealth of material to provide context for the films and make sense of them in ways you wouldn’t necessarily get just watching them on their own.

FF: As a teacher of classical literature, there are a few titles I have a hard time saying are “merely human.” Every time I read The Divine Comedy, there are passages of such surpassing clarity and artistry, I think, “This is not merely human work.” Your claim that Star Wars is “near endless in its complexity” seems to suggest that George Lucas had unusually fine access to something transcendent. In other words, he wasn’t doing it all on his own. What gave Lucas the unique ability to get so deep?

TL: I think one thing The Divine Comedy and Star Wars have in common – along with most of the great works of the western canon – is their dense intertextuality. Both heavily reference the classics that came before them and have stood the test of time, and in this way neither Lucas nor Dante is “doing it all on his own;” both are taking part in a centuries-long conversation, and I think this accounts for the timeless quality of both works. More than many modern artists, Lucas is deeply conscious of his predecessors, and is explicitly concerned with referencing them and even, in an anthropological sense, preserving them. I would argue that one of the defining characteristics of Lucas as an artist is his ability to work in the intersection of the ancient and the modern, of high art and low art. THX-1138 is Plato’s allegory of the cave by way of Orwell and Huxley. American Graffiti is a classic bildungsroman and a time capsule of Lucas’ own formative years. And Star Wars is fraught with mythological underpinnings, but presents them all through the lens of a Flash Gordon homage.

FF: I would wager that many people in their 30s and 40s have seen Star Wars more than ten times. I suspect I have seen it more than thirty times, and most of those viewings came before I was eighteen years old. How many times of you seen Star Wars? Have you found there is a learning curve with the film? Is every viewing fresh, or does it go flat for several viewings and come back more interesting?

TL:  I would hazard a guess that I’ve seen each of the three original films more than twenty times. The prequels are another story; I’ve seen The Phantom Menace maybe a dozen times, as I grew up with it, but was only introduced to Attack of the Clones and Revenge of the Sith later. I used to hate Clones, and only recently came around to it, so I’ve seen it least – maybe six or seven times in its entirety. For Sith it’s probably more like ten. I certainly wouldn’t say each of those viewings has been fresh – I know the original film well enough that there have been times my eyes glazed over watching it – but I would say that on the whole, my experience with the films has been one of enrichment over time. Over the years, more layers have continued to reveal themselves, and I don’t feel like I’ve come close to exhausting them. Greater familiarity with Lucas’ influences has opened up new ways of looking at them, and coming back to them at different times in my life, they always resonate in different ways.

TL:  I am always in favor of using practical effects when at all possible, and I absolutely agree that the tactile quality of the original films has already aged better than the CGI-heavy later films. That said, credit where credit is due: I admire the prequels’ effects for their boundary-pushing nature and the sheer scope of their vision, even when they don’t always stick the landing. Moreover, the amount of practical effects in the prequels is often undersold; a staggering amount of physical sets, costumes, vehicles and creatures were made for them. You mention video games as a reference point, and I think the intangible quality of, say, the Clone Troopers and Battle Droids bears out your complaint to an extent. Thankfully, though, I think that as a general rule, Lucas goes for physicality when it most counts. The key villains of the prequels, for instance, are almost all played by real actors, which accounts for Darth Maul’s enduring place in the public psyche (and, inversely, for General Grievous’ failure to make a substantial impression in it).

FF: Given your previous work for FilmFisher, I suspect that your reviews of Episodes I through III will attempt to rehabilitate the inglorious reputation of those films. Any hints for readers at where you think the critical perspective on those films failed back when they were initially released?

TL:   You suspect correctly. I suppose by now I’ve amply demonstrated my weakness for defending films that I think are underappreciated or misunderstood, and few films are as prominently misunderstood as the prequels. What’s interesting is that they weren’t actually received too terribly when they were first released; their scores on critical aggregator sites like Rotten Tomatoes and Metacritic don’t demonstrate too great a disparity between originals and prequels, and each of the three installments is ranked more highly than the last. My generation grew up with the prequels, and as a child, I remember gauging mostly enthusiastic responses towards the films from among my peers. In short, I think the narrative of prequel hatred has been exaggerated – and I would place most of the blame for its prevalence at the hands of misplaced expectations. After the original films, people had fifteen years to form an idea of what Star Wars was supposed to be, and the prequels were wildly idiosyncratic visions that didn’t match up to that idea – even if, in my mind, they stayed true to the spirit of Star Wars in every substantial way.

FF: While not heavily codified, Hollywood tends to recognize some kind of hierarchy of genres. Animated films are rarely nominated for Best Picture, and neither are comedies or big fantasy pictures. Biopics, dramas, and based-on-a-true-story films often vie for coveted critical honors. That said, was Star Wars truly deserving of Best Picture the year it came out? Is the fact that it’s a little goofy, a little hokey, and full of talking puppets immaterial to its greatness? Have the last forty years proven the Academy doesn’t actually know what true greatness is?

TL: I don’t place a high premium on the Academy’s ability to recognize true greatness; in the last twenty years, I’d say they make the right choice roughly one out of every ten times. If the purpose of Best Picture is to pick the film that will have the most lasting cultural impact, they don’t have a good track record, and Star Wars is perhaps the greatest missed opportunity of the last century. Annie Hall is a fine film, and I don’t want to downplay its merits – but in terms of being a massively influential work of art, there’s no contest between the two.

FF: I’m going to go out on a limb here and say that I’ve had real, heartfelt conversations with friends in which I explained myself by way of Star Wars analogies. Part of this has to do with the fact that I saw Star Wars for the first time when I was quite young and it thus sank very deeply into my psyche. Obi-Wan’s death was the first mysterious death I ever encountered by way of an image. How important is it that viewers encounter these movies first when they are still young?

TL: I would venture to say that, as a child, my view of the world and sense of morality were shaped most prominently by two things: the Bible and Star Wars. This is no accident; Lucas, modeling his saga on myths and fairy tales, is very interested in guiding the formation of young people. These films operate on a primal level that’s best appreciated by those who are very young, or can approach them through childlike eyes. So I definitely think there are real benefits to be gained from experiencing the original films at a young age. It’s harder for me to say when it comes to the prequels, as I didn’t encounter them at the same formative stage. I’d hazard a guess that their complexity would be much harder for a young person to digest, but I’m also willing to bet that, for the most part, their key emotional points would land on the instinctive level Lucas intended.