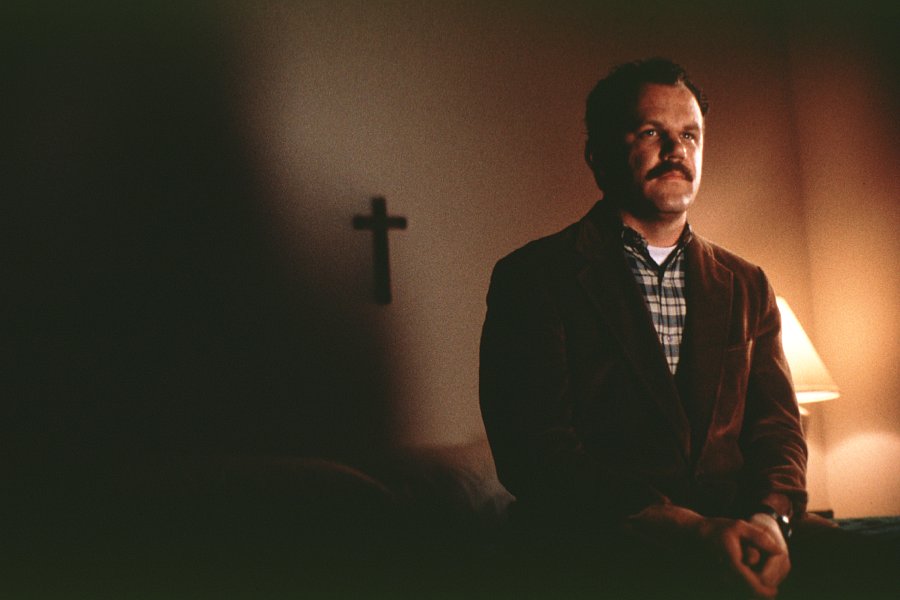 Paul Thomas Anderson seemed to leap from southern California fully formed as a filmmaker. His first short-film,which was financed by his father, a girlfriend’s credit card and other donors, was accepted into the Sundance Film Festival and landed him funding for a full length feature. Since then and over the course of six films he has established himself as one of the foremost American auteurs in a golden age of auteurs that includes the Coen Brothers, Quentin Tarantino, Wes Anderson and Sofia Coppola. The work of these directors is striking for the width of themes and styles on display as well as the social classes they depict, from high society (Wes Anderson, Coppola) to the low lifes (Coen Brothers, Tarantino), but of them only P.T. Anderson is distinctly concerned with the American psyche.

Anderson’s films deal with themes of sons and fathers, both natural and surrogate, salesmanship, and are frequently set in or around the San Fernando Valley, but as he refines his voice a stark portrait and critique of America emerges. To see this, I want to discuss his films in chronological order.

John Finnegan (a svelte John C. Reilly) is broke and aimless when Sydney Brown (Philip Baker Hall) finds him and transforms him into a successful small-time gambler. John falls for Clementine (Gwyneth Paltrow), a waitress and occasional hooker, and they marry. When a client of Clementine’s refuses to pay and the situation spins out of control, Sydney is called in to fix the situation.

From the beginning, Anderson has a moral vision. Sydney, burdened with guilt from his past, becomes a father figure to both John and Clementine. Despite their failings and faults, he takes on their troubles and saves them. Though Sydney is sullied (as his surname attests) he seeks to make amends by taking on the burdens and debts of others in order to preserve them.

While this was Anderson’s first commercial success and critical darling, it is also the outlier of his filmography. In the rest of his films his characters are presented sympathetically even while their sins are chronicled (Frank T.J. Mackie, Barry Egan) and shown to be inexcusable (Jimmy Gator, Daniel Plainview), but in Boogie Nights the suffering is played for jokes and the trials are not transformative. Their lives are destroyed for the entertainment of the audience like a Tarantino film whose gleeful violence and lust caters neither to reflection, nor to redemption. His is a cinema of derision in which death and suffering are humorous and/or the justification for vengeance; and while Anderson is no apologist for revenge like Tarantino, Boogie Nights is the only film in which judgment occurs and neither the characters nor the audience are given space to reflect on it.

Magnolia (1999)
If I were to point to one movie that changed my life and opened my eyes to the marvels of cinema it would be this one. It is a tour-de-force ensemble film featuring dying fathers and their estranged children, a police officer, a male nurse and a couple of boy geniuses, all of which are ridiculed and lonely; thievery, abuse, lies and a divine act that ties each of the disparate threads together.

Many filmmakers are happy to indulge in the very sins their characters are judged for (consider the sumptuously shot adultery scenes that love the sin, despite later condemning the sinner), and many are eager to depict the sins just as rapidly as they try to absolve them of any guilt or wrongdoing (loving the sinner because there is no sin), but what sets Anderson apart is that sin is never excused, though the sinner is presented sympathetically. In Magnolia the divine act of loving the unlovely is on display and its redemptive quality is shown.

Punchdrunk Love (2002)
After the sprawling Magnolia, Anderson returned with a tightly wound comedy in which a small business owner, Barry Egan (whose totter between rage and sadness is played perfectly by a button-down Adam Sandler), gets wrapped up in a scandal and a romance and, in the process is, healed.

In Anderon’s first two films there is an avuncular sort of affection (alongside foolhardy love and lust), in Magnolia love is more explicitly the focus, but in his fourth film the the transformative power of love is on full display. Barry Egan is stunted and warped, but through his somewhat desperate wooing of Lena (and the harmonium!) he grows, spurning his habit of casual lies and channelling his outbursts of emotion fruitfully in the protection of his beloved.

One important constant in Anderson’s oeuvre: there is a notable lack of fathers. In fact, there are only three fathers in his films, all of which are in Magnolia and all are scoundrels: Jimmy Gator, Earl Partridge and Rick Spector. As for Anderson, he had a very close relationship with his father so there is no need to psychoanalyze, but we should ask why is this is such a constant in his films? There are numerous surrogate fathers: Sydney Brown, Jack Horner, and, looking ahead, Daniel Plainview and Lancaster Dodd; and again each one tarnished and at varying levels of evil. To say that a feature of Anderson’s films is dysfunctional families is an understatement. 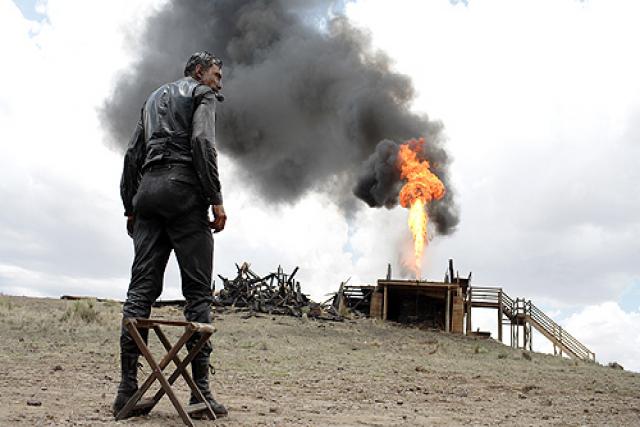 There Will Be Blood (2007)
After four films set in the modern era, Anderson goes back to 1898 to begin his story of blood, oil and the founding of the (modern) United States.Daniel Plainview is a new messiah, bringing bread, education, and wealth. Daniel Plainview is a Satan, an accuser, a murderer, a liar, and a drinker of blood. Both Christ and Antichrist, Daniel Plainview, embodies America, our industrialism and our greed, our benevolence and our violence.

The movie traces the rise and fall of Plainview from silver miner, to wildcatter, to oil mogul ending in 1927. The story is loosely based on Upton Sinclair’s Oil! and I say loosely because Anderson abandoned the book after 150 pages. Aside from a few characters and situations the movie itself is completely different. One of the changes is naming the fictional south California town Little Boston. In this he reveals his motive to capture the American zeitgeist, recapitulating our founding with the Boston tea party replayed with Texas tea. While my heart says Magnolia, the head says that not only is There Will Be Blood Anderson’s best film, but one of the greatest films of the modern era.

The Master (2012)
Freddie Quell is a wanderer, going to and fro across the face of the earth. He’s a “dirty animal”, a “scoundrel” and a “silly boy”, as his would-be master, Lancaster Dodd, labels him. Drinking, brawling, full of lies and lasciviousness, Freddie Quell is searching for his way back into the world after the war. He finds someone who seems to have what he wants, a wife and family and, most importantly, a Cause. The Master picks up where There Will Be Blood leaves off, taking us through the 40s into the 50s.

The Master is about America’s sticky relationship with cults and psychology fads, opening a backdoor discussion of faith. Freddie must learn how to master himself and while the resolution is open-ended, there is a hint that again the answer is love.

So what is Paul Thomas Anderson’s vision? Arranging the movies in their historical order (including his upcoming film) you have a rough portrait of American from the 1900s into the 2000s: There Will Be Blood, The Master, Inherent Vice, Boogie Nights, Hard 8, Magnolia, Punchdrunk Love. 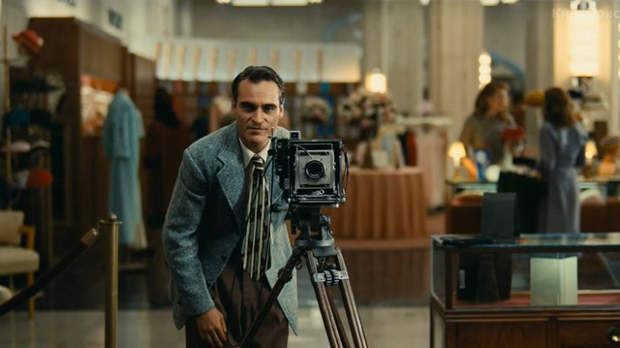 Without the foundational love of a father there is an emptiness that must be filled which explains the second longrunning thread in Anderson’s work: salesmanship. From the suave salesmanship of Sydney to the braggadocio of Frank TJ Mackie to the seductive Plainview and Dodd, the response to fatherlessness seems to be to sell yourself, to create a new family built on common ideas. These families fall apart, however, with Plainview driving away his son, Dodd hemorrhaging followers, the destruction of lives and families in Boogie Nights and Magnolia; but there are two exceptions in this bleak portrait: Officer Jim Kurring and Barry Egan.

Again, both are salesmen, Egan running a toilet plunger boutique and Kurring is pitching himself on a dating service. But both men are set apart from the other salesmen in Anderson’s films in that they seek to create a true family. Barry Egan can only win his bride when he drops his salesmanship and speak honestly. It is also noteworthy that his antagonist is the Mattress Man and the coup d’etat of his romance comes at the exploitation of another business’ airline promotion. Corporate America’s War, Lust and Greed can only be defeated with selfless and sacrificial love.

I consider Paul Thomas Anderson the most original, talented and important filmmaker alive today and I hope this survey, shamefully brief on analysis and absent of praise for his considerable technical skill, sparks a desire to watch and rewatch his challenging films. Inherent Vice, the film that bridges his recent works with his early works, goes into wide release January 9th.