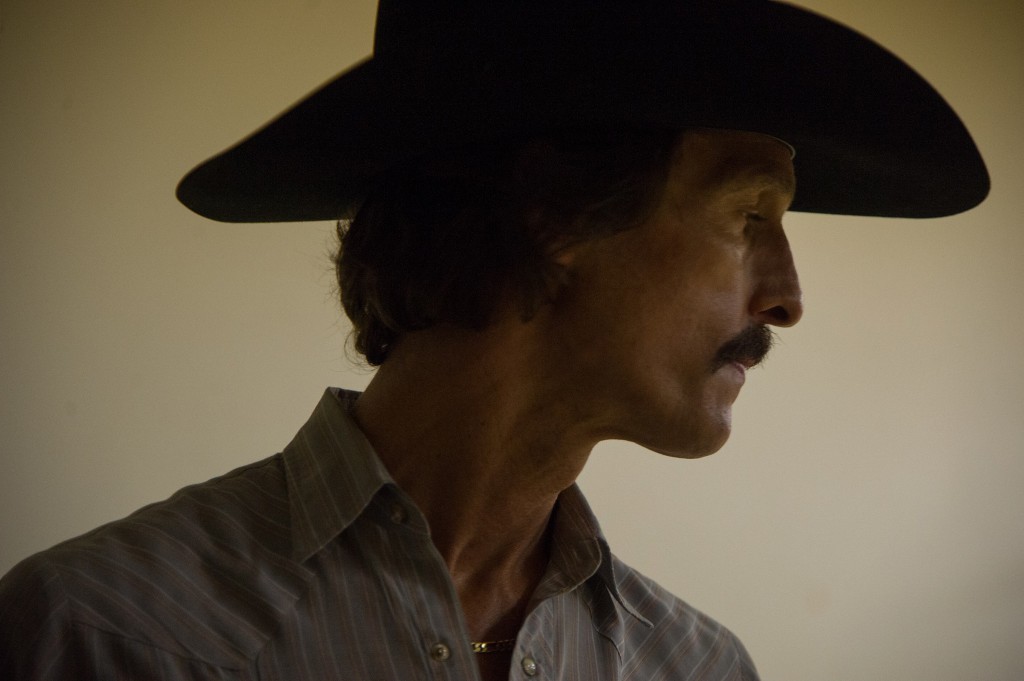 “I am rodeo!” -Ron Woodroof

Every movie tells its story using symbols. At the very least, a movie will invoke cultural symbols and tropes, but a more attentive filmmaker will build new symbols specifically tailored to the story through repetition. These symbols embody the underlying themes of a movie and will shape the attentive viewer to subtle shifts while giving weight to the narrative. To simplify: a symbol is any word, phrase, event or object that gains meaning through repetition. One ready example are the names in Inception: there is a theme of mazes, spiderwebs, weaving and dreams hinted at in the names of Ariadne (mistress of the labyrinth), Cobb (meaning spider, hence cobweb), Saito (Japanese for Website), and Yusef (see Joseph the Dream Interpreter of the Bible). Any time an object reappears or an event or expression is repeated this is a clue to the viewer to pay attention.

In the Oscar nominated film Dallas Buyers Club, written by Craig Borten and Melisa Wallack, the rodeo reappears three times and the protagonist of the film, Ron Woodroof, identifies himself with the rodeo lifestyle. There is some narrative signalling here, since the rodeo bookends the film as well as appears midway through, that requires examination.

The movie begins in medias rodeo, seeing a cowboy flailing atop a bull and hearing the roar of the crowd and the gutturals of illicit sex. Looking through the slats of a bull stall, as the rider is roughly tossed to the dirt, we see a grunting and heaving Ron Woodroof in carnal throes. There is a ringing in the air. Another woman snorts a line of coke and exchanges places with Woodroof’s partner, the animal thrusting resumes and the thrown rider gets stomped by the bull. The ringing grows louder. In the ring we see the cowboy dragged off by the rodeo clowns. Woodroof gasps and staggers, he braces himself. Something is wrong.

The beginning of the film is a sort of reckoning and his reckless activity, his boozing, whoring, gambling and no good rotten scoundrelling is shown before he is diagnosed with HIV. The second scene in the rodeo has Woodroof taking (what turns out to be the harmful drug) AZT and mixing it with tequila. He sits in the bleachers of an empty arena looking haggard and dissipated. In the center of the ring a morose looking rodeo clown stands in a barrel. Woodroof blinks through the vision, empties the bottle and flings it into the ring.

The final rodeo scene concludes the film. It’s a vision or flashback of Woodroof, healthier and stronger, sitting atop the rail above the stall. Below a bull bides time. Woodroof hauls back on a flask taken from his pocket. He straddles the bull, the gate is opened and dear life is held on. The crowd erupts into cheers, Woodroof’s free hand chops air, there is a dull ringing still and the frame freezes in time and fades to black.

These three scenes reflect Woodroof’s character. In the first scene he is beastly; his coarse dealings with women, his thieving, his swearing, his drunkenness, are indicated by his appearance behind the bars of the bull stall, obscured by the shadows. In the second appearance of the rodeo he is in the stands. He is still animalistic, but the curious vision of a single clown rising from his hiding place in the blue rodeo barrel signals a turn. The film shifts from a desperate tale of clinging to life to a desperate tale of living life. He is not yet in the game, but he realizes that he is hiding from the brutal disease, like the clown cowering before the bull. As the film progresses his lasciviousness is curbed by the disease and he takes an active role in not only managing his own symptoms and medication, but in providing help to others. The film’s last images are a metaphor for his resistance to the disease. The bucking bull will toss him, he will die from his condition, but he is no longer passive to his life, he is no longer passive toward his living, he resists the rough beast of nature with verve and passion, which is the most the film can muster in terms of morals: go down fighting.

Stories are cyclical, spiraling back to the start, recapping the adventure in some way. Good movies will carry meaning backwards to the beginning. This partly explains why good movies can bear repeated critical viewings. Each time we cycle back, the end of the movie plunges into the beginning. It’s all there, but sometimes we have to experience the movie before we can see it, like Carl in Pixar’s UP, we have to be confronted with life to recognize the lessons.

Inside A Scene: The Remains of the Day