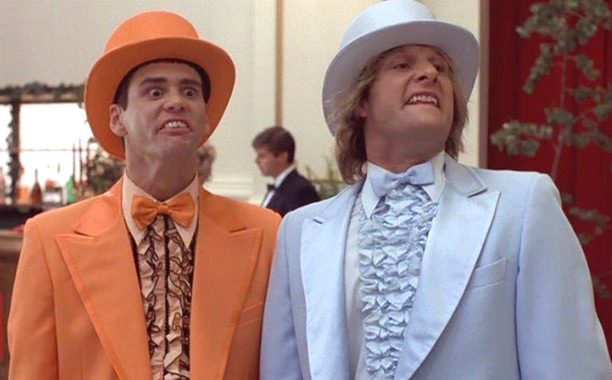 The chiasm, or chiastic structure, is a pattern of organizing ideas in a narrative that was commonly used in ancient Hebrew scripture. Put simply, a chiasm follows the following structure: A B C D C’ B’ A’

Many chiasms are even longer than this and contain a greater number of corresponding items.

If you map out the plot of Dumb and Dumber, you’ll find that the plot is structured as a chiasm, just like many passages of Hebrew scripture.

A: Lloyd pauses by side of the road, leers at a beautiful woman.

D: A blind boy is scammed out of his money, then Harry and Lloyd spend the money.

E: Mental, the thug trying to kill Harry and Lloyd, is poisoned.

G: Exchange of vehicles: the Shaggin’ Wagon is traded in for a moped.

H: Harry begins walking back to Providence/ Harry and Lloyd get back together.

F’: Harry pees while in transit (becomes frozen to Lloyd).

G’: Exchange of vehicles: moped traded in for Lamborghini Diablo.

D’: Mary/the kidnappers are scammed out of their money when Harry and Lloyd discover what’s in the briefcase.

A’: Bus of beautiful women pauses by side of the road, women leer at Lloyd and Harry.

And then there’s the matter of the coda of the film, which matches the center of the chiasm.