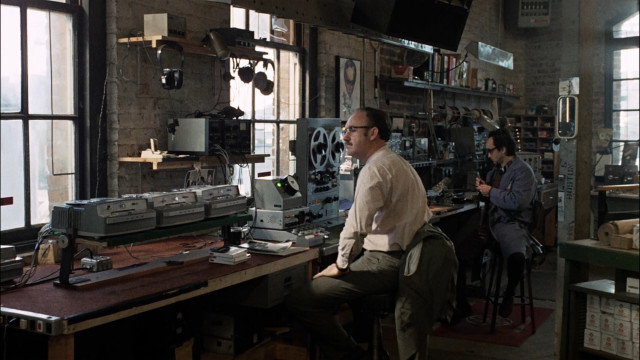 “It had nothing to do with me. I just turned in the tapes.” Again and again, that’s the refrain of Francis Ford Coppola’s The Conversation. Overlooked in favor of Coppola’s more famous features when it was released in 1974, The Conversation’s small-scale tragedy presents a powerful study of the way in which sin grows out of our unwillingness to tell ourselves the truth about what we do and who we are, one that history has since made even more resonant.

When we meet Harry Caul (Gene Hackman), he and his surveillance team are at work recording a young couple in San Francisco’s Union Square, cobbling together an audio track that is a marvel of clarity, especially for the film’s 1972 setting. He doesn’t know anything about them, but as he listens to the tape again and again, he begins to believe that the couple’s lives will be in danger if he delivers the tape.

Caul lives an isolated life. He is reserved with his employees and emotionally distant with his girlfriend, and the nature of his work has made him enormously paranoid; his apartment has multiple locks and (he claims) no telephone. He opens himself up only by playing saxophone. His caution is at least partly because of a specific job in his past, one which led to the murders of three people and caused him to move from New York to San Francisco. But he refuses to be honest with himself about the connection between what he does and those murders; as he says, “It had nothing do with me; I just turned in the tapes.”

Instead of admitting that what he does is responsible for at least three deaths, he constructs a hypocritical morality by which he can distance himself from its results. Caul comes face to face with his hypocrisy when he meets his competitor, Bernie Moran, at a trade convention. Moran is everything Caul is not – brash, outgoing, and capable of finding two blondes to accompany Caul’s team back to Caul’s workshop for a party. At that party, Moran presses Caul to reveal the secret of the deadly recording that is eating at Caul, but he refuses.

Moran needles Caul by revealing that a pen he had given him earlier was a bug, as if to prove that he’s better at this job than Caul. But while Caul is happy to discuss his other successes, he won’t reveal the secrets of the New York tape. That is the bridge he will not cross; he has built himself a moral code, and while we can see its hypocrisies, he cannot.

Even Caul’s subconscious constructs and reconstructs the world around him to suit his understanding. Every time Caul revisits it, Coppola shows what seems like the same footage of the conversation. But in fact, Coppola subtly alters the angles from which we see it and dubs in different readings of the words, with differing inflections and tones. Caul believes himself to be working towards objectivity, when in fact he’s imposing meaning on their words, and on the events of his life, to make them suit his desires. His life is an ongoing effort to arrange the world around him into an order that will allow him to overlook his hypocrisy.

The bugged pen Moran gives Caul foreshadows Caul’s eventual downfall. The recorded conversation’s true meaning becomes clear when the couple murders the recording’s original buyer as part of a corporate coup and stages his death as an accident. When he learns this, Caul suddenly realizes the true meaning of the phrase that he had thought meant that their lives were in danger, and so does the audience, as the intonation of the words “He’d kill us if he got the chance” changes drastically.

Caul attempts to confront the killers. But instead, they confront him; calling him on the secret phone in his apartment, they play him a recording of his own saxophone playing to reveal that they have bugged his apartment. Caul is powerless. His hypocrisy has eaten him alive, as he cannot find the bug in his walls even after tearing them apart, and the film ends with him playing his saxophone among the ruins of his apartment.

By pursuing the relationship between our perceptions and our motives, The Conversation brings a 1970’s sensibility to a question often considered in movies. Think, for example, of Vertigo (also, incidentally, set in San Francisco), in which Hitchcock toyed with Jimmy Stewart’s reality by presenting him with what seemed to be two versions of the same person, while refusing to make clear to the audience whether or not the main character was actually seeing different people. In the end, Stewart discovers that the person he had thought to be the ‘true’ identity was a lie, and the woman he had thought to be an impersonator was the ‘real’ person – and yet in the end, by pursuing the issue, he makes the line between the ‘real’ woman and the impostor irrelevant. But where Vertigo considered how this affects our personal lives, The Conversation expands its scope by suggesting that even world events can be distorted by our attempts to understand them, and to bring them in line with the world we want to be in.

What makes The Conversation’s perceptiveness about the way we choose to ignore our own hypocrisies especially fascinating is the way that historical perspective situates it in its time. At a textual level, The Conversation is not a Watergate film; its script was written years before Nixon’s resignation, and it was filmed before the administration’s wiretapping habits came to light. It is simply a story about a man dealing badly with his guilt.

And yet The Conversation couldn’t be more of a Watergate movie if it had meant to be. As he tries to make Caul reveal his secrets, Moran brags about his greatest success – he bugged one party’s candidate on behalf of the other in the 1960 presidential election. He coyly refuses to say which side he worked for, but as he says, “Draw your own conclusions – he lost.” In the 1960 election, that means that Moran was bugging none other than Richard Nixon, who lost to that election to JFK.

In retrospect, The Conversation accuses its audience with a precision that time has only made more acute. You have always known that your politicians played dirty, it says; you have always known, deep down, that there are chronic sins in your society, that there are chronic sins in your own soul. And yet here you are, no different than Caul, arranging your understanding of the world so that you can claim you didn’t know, that you only delivered the tapes. You, like Caul, keep pushing that knowledge down, hoping that reality will never confront you in a way you cannot avoid.

When that confrontation comes, it will be crushing. For Caul, it comes in a murdered man and the sound of his own saxophone at the other end of a threatening phone call. For America in 1974 it came in a disgraced president and a humiliated nation. For you the audience, The Conversation says, this is your chance to look at yourself honestly and make sure it never comes at all.