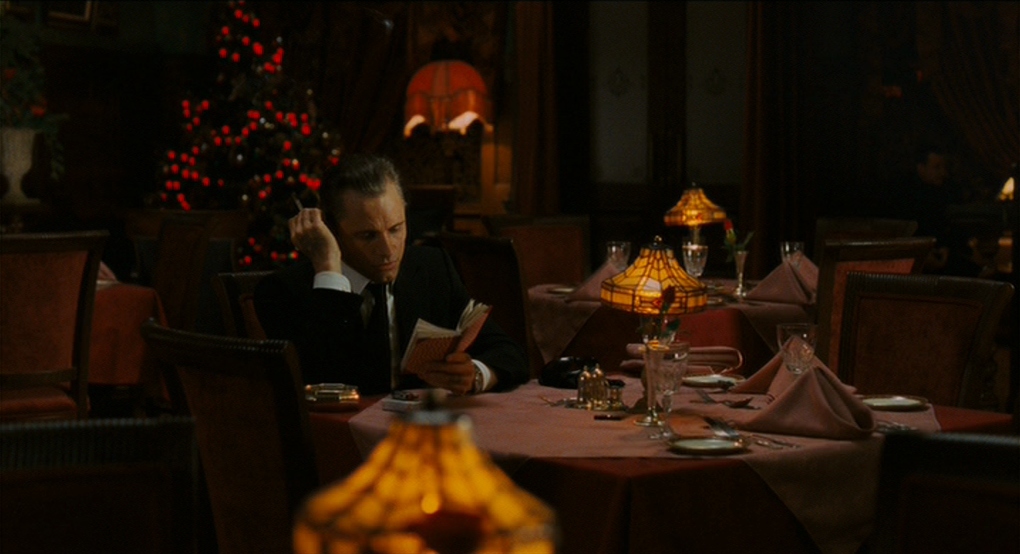 Thus saith the Lord; a voice was heard in Ramah, lamentation, and bitter weeping; Rachel weeping for her children refused to be comforted, because they were not.

Thus saith the Lord; refrain thy voice from weeping, and thine eyes from tears; for thy work shall be rewarded, saith the Lord; and they shall come again from the land of the enemy.

In the church calendar, the Feast of the Holy Innocents – the children of Bethlehem, slaughtered by King Herod, collateral damage in his attempt to destroy the infant Christ – falls a mere three days after Christmas on December 28th. One of the darkest days of the Christian year intrudes right into the middle of the joy of Christmastide; the celebration of the birth of Christ is followed all too swiftly by lamentation over the deaths of the Holy Innocents. As Anna (Naomi Watts) says in Eastern Promises, “Sometimes birth and death go together.”

Herod’s massacre of the Holy Innocents is only one of many typological links between the story of the Nativity and the story of the Exodus. Like Herod, Pharaoh orders the deaths of children to preserve his power, and like Christ, Moses is the sole survivor of this atrocious slaughter. Moses delivers his people from the bondage of Egypt through the water of the Red Sea, just as Christ delivers us from the bondage of sin through the water of baptism.

Although it is set in late December and Christmas decorations adorn the background of most of its scenes, Eastern Promises seems a strange candidate for a great Christmas movie, given its graphic sex and grisly violence. As director David Cronenberg and writer Steven Knight unspool their story, though, one realizes just how deeply the Christmas theme is woven in. Eastern Promises is a film about a birth that breaks the power of a tyrant – and a film that is theologically astute enough to overlay the Exodus with the Nativity.

The film’s conflation of these two Biblical sources is on display in the figure of its heroine, Anna. Anna shares her name with the prophetess who recognized the infant Christ as the Messiah when He was presented at the temple, but her profession as a midwife links her to the God-fearing midwives who defied Pharaoh’s command to put the Israelites’ newborn children to death. The story begins when Anna delivers the child of Tatiana, a Russian sex slave who escapes captivity in London around Christmastime and dies giving birth to a daughter. Anna, who has recently suffered a miscarriage, is immediately drawn to the baby, naming it – significantly – Christine. The Book of Exodus tells us that because the midwives feared God, He blessed them with families, and this proves true of Anna, who ultimately adopts Christine as her own.

First, though, she seeks to reunite Christine with her biological family, and her quest to translate Tatiana’s diary brings her to Semyon (Armin Mueller-Stahl). Semyon is named after Simeon, the devout prophet who, along with Anna, recognized the infant Christ as the consolation of Israel. His name positions him as a counterpart to Anna, a kindred spirit, and he presents himself accordingly as a kindly, soft-spoken old man. Semyon’s name proves to be ironic, though. In reality, he is the Herod, the Pharaoh, of this story: a patriarch in the Russian mafia that enslaved Tatiana. Like the cunning Herod, who sought to learn Christ’s identity from the Magi under the pretense of wanting to worship Him as well, Semyon feigns an innocent interest in helping Anna find Tatiana’s family, even as he schemes to hide the truth from her.

The truth Semyon seeks to hide is the fact that Christine is his daughter, conceived when he raped Tatiana. Christine is evidence of Semyon’s guilt. Her very existence testifies to his sin. Christine’s role in the story befits her name: Christ is the light of the world, but this light is not welcomed by all, for it reveals truths the world would kill to keep hidden. As St. John says:

And this is the condemnation, that the light has come into the world, and men loved darkness rather than light, because their deeds were evil. For everyone practicing evil hates the light and does not come to the light, lest his deeds should be exposed. But he who does the truth comes to the light, that his deeds may be clearly seen, that they have been done in God.

Semyon’s modus operandi – to suppress the truth about himself, even if it means killing – is also practiced by his son Kirill (Vincent Cassel). While Anna is trying to find Tatiana’s family, a parallel plot is set in motion when Kirill – who secretly harbors romantic feelings towards his enforcer Nikolai (Viggo Mortensen) – orders a hit on a rival gangster for “spreading rumors” that he is a homosexual.

The undoing of Semyon’s power, like Pharaoh’s, begins in his own home. When Semyon realizes that a DNA test would convict him of Tatiana’s rape, he orders Kirill to murder Christine and destroy the evidence. However, like Pharaoh’s daughter, who drew Moses out of the River Nile, Kirill has mercy on the baby: he cannot bring himself to cast Christine into the River Thames.

Between these two wicked men desperately striving to cover up their sins is Nikolai, who proves to be one of cinema’s unlikeliest Christ figures. In this Christmas story, Nikolai is, of course, named for Saint Nicolas. Saint Nicolas is best remembered for his secret gift of gold to a man tempted by poverty to sell his daughters into slavery. Nikolai, similarly, works in secret to free the young women enslaved by Semyon: he is an undercover agent for Scotland Yard.

Nikolai ultimately lives up to the tattoo of the crucified Christ on his chest. Because of the unauthorized hit he commissioned to cover up his homosexuality, Kirill has been marked for death by rival gangsters. To save his son, Semyon (without Kirill’s knowledge) has Nikolai inked with matching tattoos so that he can pass for Kirill. In a rather literal fashion, then, Nikolai takes on Kirill’s sins; we might almost say that he takes on Kirill’s body, in a dim reflection of the way Christ took on a human body, capable of death, so that He might suffer the death merited by our sins in our place. The unwitting Nikolai goes to the slaughter in Kirill’s stead, but under the sacrificial knife, he turns out to be more like a lion than a lamb. After killing the would-be assassins and indirectly saving Kirill’s life, he saves Kirill’s soul from being stained by Christine’s murder, saves Christine from Semyon’s plots, and gives her to Anna, saving Anna from the grief of her childlessness. When Anna wants to know why he helped them, though, Nikolai – like Semyon and Kirill – hides his true nature. Instead of accepting her gratitude, he invites her contempt, offering a selfish motive for his actions: “How can I become king when the king is still in place?” Whereas Semyon pretends to be good so that he can continue doing evil, Nikolai pretends to be evil so that he can continue doing good. Like his namesake, Saint Nicolas, Nikolai practices righteousness under a cloak of anonymity, embodying Christ’s teaching:

But when you do a charitable deed, do not let your left hand know what your right hand is doing, that your charitable deed may be in secret; and your Father who sees in secret will Himself reward you openly.

Nikolai’s reward is in heaven. He will have none on earth.