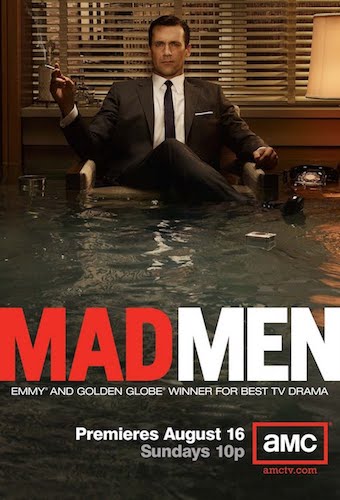 FilmFisher is proud to host a collaborative series of “Inside A Scene” essays on the television show Mad Men, covering crucial scenes from each of the show’s seasons. Last week, Timothy Lawrence wrote about a critical conversation from Season 2’s “Meditations In An Emergency.”

… and he doesn’t walk out. Instead he gets his foot run over by a lawnmower. “He’s lost the foot … He’ll never golf again,” they say. And thus Mad Men receives what is perhaps the most shocking moment in the whole series. Yet the rest of the episode is delightful and lighthearted – even after the foot mowing and blood splattering in the middle of the office. The tense parts come with the smaller things: office politics, Joan’s husband Greg not receiving chief residency, and Lane’s transfer to India. And this points to the way Mad Men reflects real life. The problems that people are most concerned with are those that involve themselves. Even if something extraordinarily terrible happens right in front of them to a different person, their problems are still felt far more. This is human. We cannot help it, and neither can the characters on the show. This episode is a close look at exactly how people respond to problems, and the lawnmower scene shows different responses to the other in peril.

The context of the scene is that three executives from Sterling Cooper’s parent company (Putnam, Powell, and Lowe) have arrived from across the pond – a visit that Sterling Cooper staff were only given a day’s notice of – and just given everyone surprising news about restructuring within the company. One of those executives is named Guy MacKendrick, and he is there to replace Lane Pryce as Chief Operating Manager while Lane is moved to India to handle another PP&L acquisition. They are now having an office party that was originally intended as a surprise to celebrate Joan’s last day (she was leaving because she thought her husband was going to be Chief Resident), but unbeknownst to everyone there, Joan will need to get another job and the party only serves as a reminder of that new burden. And just the previous day, Ken Cosgrove had landed a new account with John Deere, ceremoniously parading around in a brand-new driving lawnmower to great effect. The party serves as an intersection to all these things, and their reaction to what’s afoot (or rather so-lacking) displays their character and gives a glimpse into our own humanity.

The first reaction to the lawn mower incident is the most common, by far. Pete, Peggy, Roger, Kinsey, Harry, and almost everyone else in the office simply watch in horror – Peggy even faints (right into Pete’s arms). This is unsurprising, particularly for Pete, Kinsey, and one of the secretaries (whose name I cannot recall) who are showered with blood from Guy’s maimed foot. Reacting in a helpful way to such a traumatic event takes a lot of effort and/or practice. This serves as a glimpse into pure shock: a very human emotion, which later in the episode we see dealt with in different ways. Kinsey, Harry, Ken, Smitty, and Pete are reflecting on the tragedy not long afterwards in Kinsey’s office. Smitty feels guilty since he’s the one who got the lawnmower out and let Lois (the secretary responsible for destroying Guy’s foot) ride it. Harry is quiet – trying not to be sick – and Ken, Kinsey, and Pete are not saying much of anything either. Roger Sterling walks in and asks how everyone is doing. Upon learning that Guy might lose his foot, he responds with the perfectly timed one-liner, “Right when he got it in the door.” Pete, Ken, and Kinsey laugh. For them – as it is for Roger – laughter breaks the tension the shock has given them, but for others (the more squeamish Harry, and the guilty Smitty) it is not enough. What this perfectly encapsulates is the power of perspective. The gaping onlooker sees tragedy from the other side of the street, and that eventually becomes comedy.

The second and third reactions are rare – and opposite in a sense. Joan reacts to the mutilation by immediately doing everything she can to help. For Joan, this is an immediate and practiced response. She is down on the ground with Guy telling him he is going to be okay and applying pressure on his leg. Someone brings a medical kit and she wraps a tourniquet around his leg to limit blood flow. She demonstrates both compassion and competence in a time of great need and sets herself above the crowd. She is the example to be like.

I cheated a little with the third reaction: it is Don’s, who is not even in the scene. But Don’s lack of a reaction is important because he is later told about it on the phone and comes to the hospital despite being in a very important meeting with Conrad Hilton and not witnessing the traumatic event firsthand. Perhaps not witnessing something shocking makes it easier to support the person who went through it. It is certainly the case that no one who had the first type of reaction went with Guy to the hospital or came to check on him later. Joan is there, along with Don, the other two PP&L executives, and Lane. When Guy does lose his foot, the executives tell a saddened Don and Joan that “He’ll never golf again,” and that he is fired. It turns out this is good news in the long run, but Joan, Don, and Lane do not feel it was a fair decision. And so it is that we find two general types of people: those who empathize and those who remove themselves. You are only forced to tread the middle ground between the two when confronted with a horrifying incident happening to someone else. You can either empathize and do everything you can to help – like Joan, or you can slowly remove yourself and witness the tragedy from the other side of the street. We are all both of these things to some extent, but the episode, and this scene, clearly shows what the better choice is, and what you can become if you always remove yourself (i.e. remorseless executives).