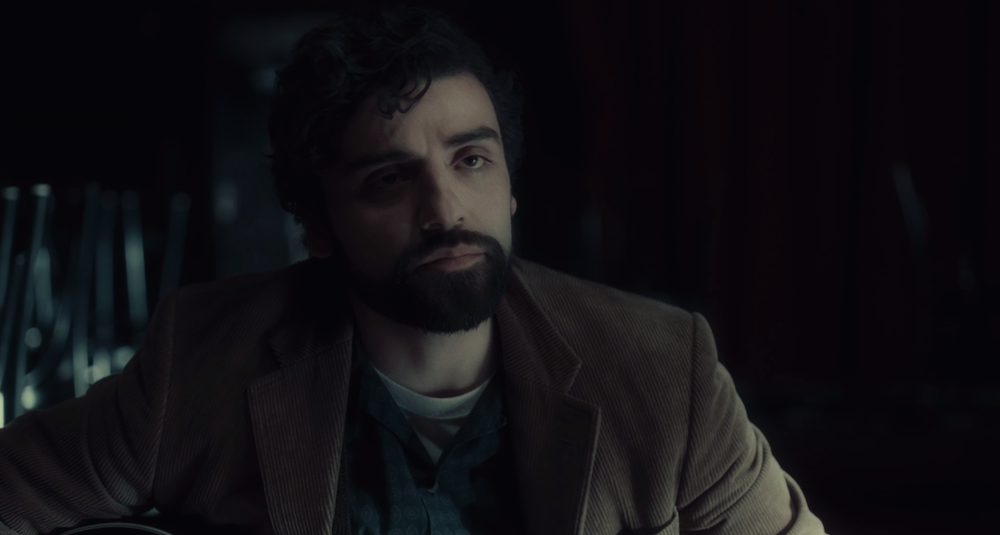 “Play me something from ‘Inside Llewyn Davis.'”

The tragic centerpiece of the Coen Brothers’ greatest film takes place at the Gate of Horn. The Gate of Horn is a music venue run by Bud Grossman (F. Murray Abraham), but it is also the most overt of the film’s many references to the Greeks. In the Odyssey, the gate of horn separates true dreams from false, which pass through the gate of ivory instead. Thus, when Grossman refuses to grant Llewyn (Oscar Isaac) passage through the Gate of Horn, so to speak, he is pronouncing a judgment of cosmic import. For Llewyn, hope for any form of earthly success as a folk singer is a false dream, doomed to remain perpetually unfulfilled.

“If it was never new and it never gets old, then it’s a folk song.”

“Exist? Is that what we do outside of show business?”

Llewyn will always be a starving artist because he scorns mere “existence” and longs for what is eternal: that which is never new and never gets old, and which is therefore forever unfashionable and unprofitable. In a particularly revealing conversation with Jean (Carey Mulligan), he speaks disdainfully about her desire for a comfortably shallow life settling down in the suburbs and having children with her husband, Jim (Justin Timberlake). To Llewyn, music is the end in itself; if it is treated as the means to an end, that’s “careerist,” “square,” “sad.” The comic centerpiece of the film, “Please Mr. Kennedy,” is in direct opposition to Llewyn’s philosophy. Written by Jim, it both mocks and pleads against the notion of striving for something above and beyond the comforts of the earth: “Please, Mr. Kennedy / I don’t want to go / Don’t shoot me into outer space.” The song is a magnificently vapid crowd-pleaser and a financial hit, but Llewyn does not share in the royalties, which is only fitting. Unlike Jim and Jean, he longs for ascent.

“Folk singer with a cat. Are you queer?”

The film is pervaded by Llewyn’s grief over the suicide of his partner, Mike. Though the Coens present us with no conclusive evidence, I suspect that Mike was Llewyn’s “partner” in more than one sense of the word. Certainly, such a reading makes the most sense of Llewyn’s bereavement, especially if we link the cat to Mike. In erotic love, and only erotic love, the lover paradoxically both has the beloved and is the beloved. Roland Turner (John Goodman) surmises that Llewyn picked up the cat after Mike jumped from the George Washington Bridge, and in fact, Llewyn picks up the cat after he listens to a song from his and Mike’s album, “If We Had Wings” – likely a reference to the Phaedrus, in which Plato posits that “long ago… the entire soul had wings.” In the Phaedrus, the beauty of the beloved reminds the soul of beauty as it is in heaven, and it is this recollection that restores the soul’s wings. The cat is Mike, and Llewyn is the cat; the cat is thus an icon of Llewyn’s partnership, his harmony, with Mike. Moreover, the cat’s name is Ulysses, the Roman form of Odysseus. The image of the gate of horn originates in the Odyssey, in which Odysseus’ wife, Penelope, dreams that he will return to her from his voyages. She concludes that the dream is false – that it comes from the gate of ivory, not that of horn. Llewyn’s own odyssey to the Gate of Horn confirms that Mike will not return to him.

“All of us are pregnant, Socrates, both in body and soul.”

“Will you open my right side / And find my baby?”

In the Symposium, Plato – the great disdainer of the material world – proffers the notion that eros is fulfilled not only through physical propagation by two bodies, but through the reproduction of ideas by two souls: “In my view, you see, when he makes contact with someone beautiful and keeps company with him, he conceives and gives birth to what he has been carrying inside him for ages.” The film is fraught with references to childbirth, and, more precisely, to abortion. Jean does not want to have Llewyn’s baby, and when he goes to the abortion clinic, he is the only man in a waiting room full of pregnant women. Though Llewyn rejects physical children, his love of Mike seeks spiritual expression through song, which the Coens, like Plato, equate to childbirth. “[T]here surely are those who are even more pregnant in their souls than in their bodies, and these are pregnant with what is fitting for a soul to bear and bring to birth. And what is fitting? Wisdom and the rest of virtue, which all poets beget, as well as all the craftsmen who are said to be creative.”

The song Llewyn sings to Bud Grossman from “Inside Llewyn Davis” (his album – the title is a pun on pregnancy) is “The Death of Queen Jane,” about a woman who dies in childbirth. More specifically, Queen Jane dies because she is unable to give birth, though she lies in labor “full nine days or more.” This is Llewyn’s predicament. Childbirth, according to the Symposium, “cannot occur in anything that is out of harmony,” and without Mike, Llewyn cannot harmonize. He is pregnant with song, but doomed to artistic miscarriage. “The Death of Queen Jane” is the truest expression of Llewyn’s soul, and in the film’s cruelest irony, it is rejected by Grossman in the most crass fashion:

The scene is both defeat and victory for Llewyn. As Jean says, he is not going to “get anywhere” because he does not want to get anywhere. He accepts Bud Grossman’s rejection, just as he accepts regular beatings in the alleyway behind the Gaslight Café. The circular shape of the film recalls Plato’s imagery, in Phaedrus, of the soul as a chariot that is eternally making circuits between heaven and earth, striving for a glimpse of the reality that only the gods can see. Like the philosophers of old, Llewyn denies himself earthly satisfaction because he longs for the divine.

If only he had wings.