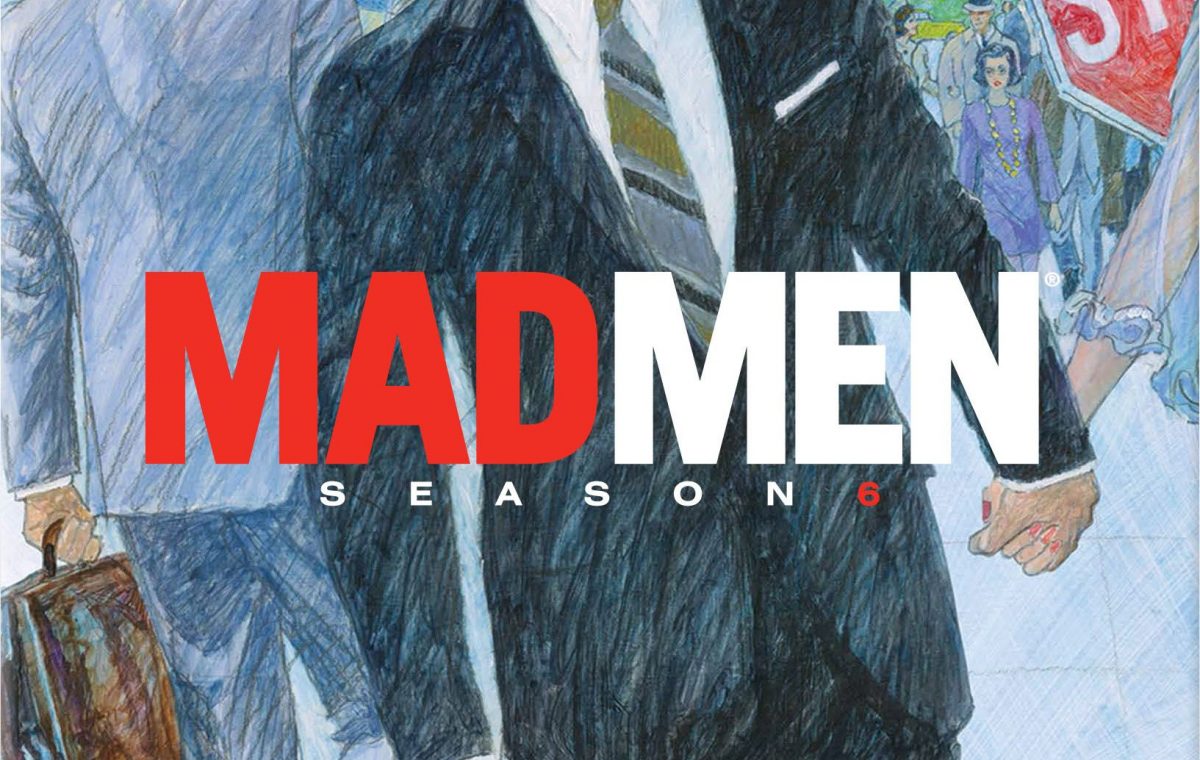 One of my favorite memories from college was watching the series finale of Mad Men with a few friends on the big screen in my university’s Cinema and Media Arts building. When everything faded, we sat there in the glow of the projector trying to find words for what had just ended. I don’t know how long we stayed, but another student had reserved the room after us and kept peeking in to see if we would ever leave. None of us wanted to, but like the members of SC&P leaving the bar in “Time & Life,” (S7 EP11) we left one by one.

Part of what drew us to the show was its ability to create an alloy of memories, hallucinations, projections, fantasies, and foreshadowing which skewed and colored what we and the characters referred to as “the present.” One of the episodes that blends time so subtly is “The Doorway” (S6 EP1). Don and Megan are on assignment for Sheraton Hotel in Hawaii just before New Year’s. Don sits at a bar and meets the drunken PFC Dinkins, who’s about to ship out to Vietnam. Dinkins’ swagger (stagger, really), appearance, and witty comments all mirror Roger Sterling. Merging the two further, Sterling reminds everyone that he shipped out from Hawaii in 1943 and he “can still smell the gardenias.” During the bar scene, you know you’re watching the present unfold, but where do you place “middle age Don Draper meets twenty something Roger Sterling” on a timeline? As they talk, their lighters somehow get mixed up, and that becomes a recurring symbol in the episode. Scenes with the lighter and Carousel recall so much from previous seasons, but I want to focus on another part of the episode: Don’s “gastrointestinal grieving” at the funeral of Roger’s mother.

Vomiting is obviously an unpleasant experience, and many people with a stomach bug prefer to avoid the ordeal by suppressing what’s making them sick rather than expelling it. Don is no different. However, his vomiting isn’t just indicative of a physical illness, but a psychological one as well. Throughout the course of the series, he’s always suppressing his psychological turmoil, but the funeral reveals that he can no longer contain it.

Don arrives drunk to the funeral. He listens to the eulogy given by Mrs. Tinsley and then vomits in an umbrella holder. Watching this, one immediately recalls Roger’s own vomiting scene. In season one’s “Red in the Face” (EP7) Don and Roger are forced to take the stairs to their office after a lunch of oysters and vodka. Roger stumbles in after Don, and he throws up in front of his staff and the clients. In an interview, the show’s creator Matthew Weiner said that Don was still mad at Roger for making a pass at his wife and subconsciously thinks, “You may hit on my wife, but you’ll never be younger than me.” Roger, formerly the only insider among all the outsiders, is reminded that his age distances him from his younger colleagues. The same becomes true for Don as he ages. He often comments that he’s losing touch with the younger generation (most notably in “Lady Lazarus,” S5 EP8), and his vomiting connects his and Roger’s anxiety about aging and death.

Just before the eulogy begins, Ken asks Don “is your mother still with us?” He is unaware that Don’s mother died shortly after giving birth to him (S3 EP6). Don ignores the question and Mrs. Tinsley begins the eulogy, in which she details the immense love Roger’s mother had for him. In the eulogy, Mrs. Tinsley quotes Mrs. Sterling: “I don’t need anyone, my heart is full because my son is my sunshine.” Roger’s mother believed her son could do more than simply make her happy, but could completely replace her dead husband. The vomit scene helps specify that Don’s psychological turmoil stems primarily from the suffering he endured at the hands of his own maternal figures. While Roger was the light of his mother’s life, Don was an unlovable burden to the women he lived with. He’s haunted by the fact that his birth resulted in the death of his mother. Given that his mother was a prostitute, he isn’t comforted by the belief that her death was an act of a sacrificial love for him either; his conception was the accidental result of a transaction, and his mother died in anger and bitterness towards both him and the john who impregnated her. His adopted mother didn’t want him either, and the only woman who ever seemed to care about him, Aimee, raped him. Don carries all of this guilt and pain inside him like a sickness, and his vomiting is the physical manifestation of it.

After Don’s bout, he’s hurried out of the room by his co-workers to let others clean up the mess. That sums up Don’s entire method of dealing with pain: he causes a problem, but distracts himself or otherwise flees from the mess he’s made. Season six, however, sets a new direction for his arc. The season takes away his mistress, alcohol, and job, so he’s forced to self-reflect and examine what comes out of him. By the season finale, Don begins to understand that he needs to face his past if he’s ever going to change his ways.

During the Hershey’s pitch, when the immaculate façade is usually cranked to one hundred, Don confesses to the executives that their chocolate was a symbol of love in the midst of the self-loathing that clouded his adolescent years. Apart from Anna and Betty Draper, these are the first people he’s ever shared his past with. Vomiting, while indicative of inner turmoil and sickness, is also a purgative process, and it seems he’s removed part of the shame and hatred he feels towards himself. He no longer tries to suppress his painful memories, but shares them. Granted, the Hershey’s executives don’t offer much help, and the partners of SCDP fire him for his sloppy confession, but he continues to open up to others. In the final scene, he takes his children to see the brothel where he, Dick Whitman, grew up. It’s not by running from his past, but by returning to it, that he finds love and acceptance. He shares a look with Sally, bewildered and grateful for his vulnerability. It’s a moment of peace amongst all the turmoil he’s felt.