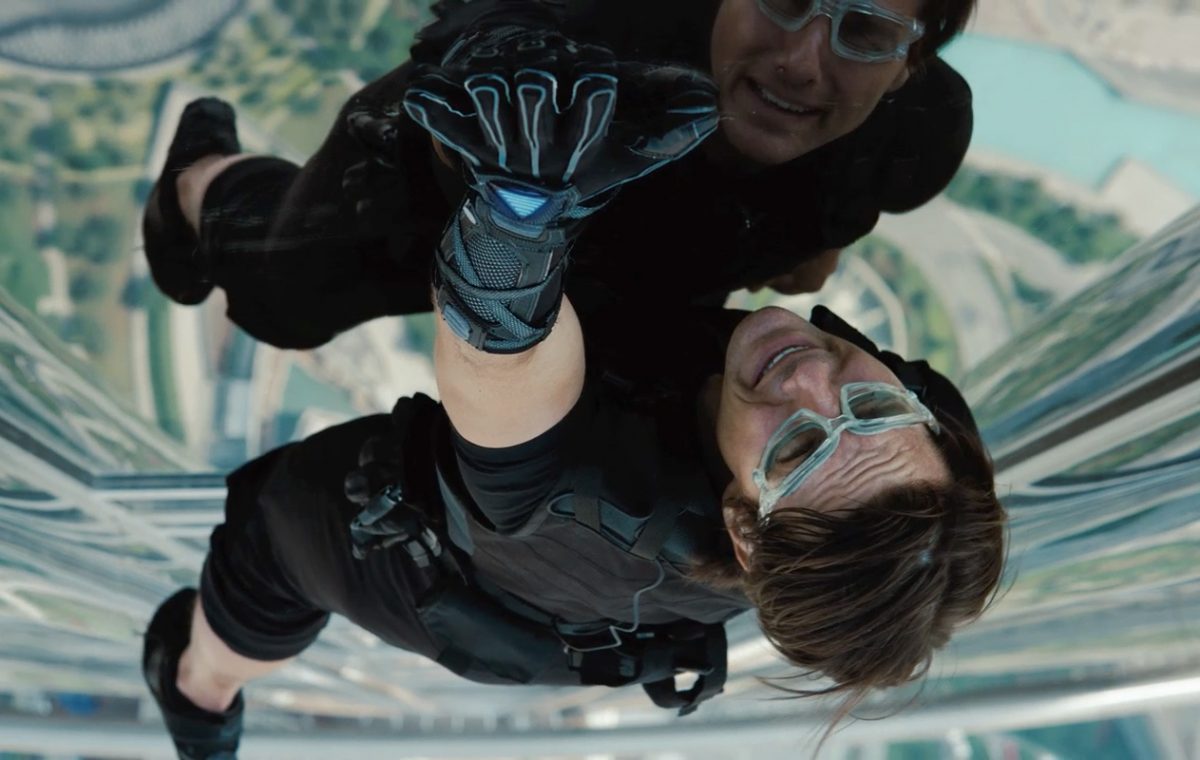 What makes an action scene good? We are in the midst of the summer movie season, the time of year when theaters are swamped in Dionysian revels of car chases, fistfights, and explosions, the kind of stuff that often draws the ire and disdain of snobby, self-serious critics. I, for one, seem to find myself less enthralled by action scenes every year. This may be a matter of a changing temperament, but it may also be nothing more than a matter of having higher standards, for while I can watch hours on end of superheroes fighting faceless computer generated goons in Marvel movies without so much as a quickened heartbeat, I am nevertheless always elated by an action scene that really works. If a film must be defended on the grounds that it is “just plain fun,” it is unlikely to be even that. There is something inherently exciting about the prospect of dinosaurs munching on people, yet scenes from Jurassic Park are held in enduringly high regard while scenes from last month’s Jurassic World: Fallen Kingdom have already faded from memory. What is the difference?

With the Mission: Impossible series’ latest installment just around the corner, I will be tackling this question by looking at a sequence from Brad Bird’s 2011 entry, Ghost Protocol, which contains what I think are some of the finest action scenes Hollywood has produced in the last quarter century. Prior to directing the film, Bird worked exclusively in animation, but far from putting him at a disadvantage, this background shines through in the best of ways. The film’s best sequences play like live-action Looney Tunes, with the characters going to increasingly ludicrous lengths to achieve a series of escalating objectives. Though cinema often relies on dialogue and music, it is fundamentally a visual medium, and as far as Ghost Protocol’s simple pleasures are concerned, Bird’s terrific ability to tell a story through images and movement easily makes up for a paper-thin script.

In the film’s most iconic sequence, the plot contrives to have Tom Cruise climb up the side of the world’s tallest building, the Burj Khalifa in Dubai. The scene can be viewed in its entirety here:

Much has been made of Cruise’s dubiously sane willingness to risk life and limb doing this sort of thing For Real™, and the sense that this is a real person really climbing this real building certainly accounts for some of the scene’s impact. Yet while it is true that far too many movies today are overly reliant on digital fakery, there are also plenty of movies in which the efforts of real stuntmen inspire little enthusiasm.

Though it sounds like mere common sense to say that an audience ought to be able to follow whatever action is happening onscreen, many action scenes in films substitute clarity for a frantic pace. Paul Greengrass’ Bourne films, with their extremely rapid cuts, often shoulder the blame for this trend. However, while Greengrass shoots his action scenes in a frenetic, shaky, quasi-documentarian style, he is skilled at making the movement of the scene clear to the viewer, and the blame lies with those who try to ape his technique without understanding how it works. Keeping the camera close to a fight scene and cutting rapidly can work to create a sense of immediacy, but staying too close and cutting too rapidly only serves to obscure what is happening. In the Burj Khalifa scene, Bird avoids this by keeping the camera at such a distance that the geography is always clear. In each shot, we immediately understand where Cruise is and which direction he is going.

A good action scene makes clear why its characters are doing what they are doing – not in terms of the larger story, per se, but in terms of immediate goals. Why Cruise wants to scale several stories of the tallest building in the world hardly matters once the camera follows him outside and vertigo kicks in; what matters in the moment is that he not fall. Bird also introduces two elements of time-based tension. The first is part of the complicated scheme our heroes are pulling off, dictating that Cruise must get upstairs and back within half an hour. Jeremy Renner verbalizes this countdown, which is helpful to the audience, if not to Cruise. The other problem is that Cruise’s adhesive gloves will cease to be sticky once they run out of power, and to communicate this, Bird gives them meters with an immediately comprehensible visual language: blue is good, red is not. Just think back to Star Wars.

The best action scenes are grounded in character. This may seem an odd requirement for Mission: Impossible films, which are not known for their surfeits of human personality. However, though the characters of Ghost Protocol are not sufficiently developed to sustain our investment while bonding over beers in a schmaltzy epilogue, in the thick of an action scene, such concerns fall by the wayside. Though it is usually preferable that a film be populated by what seem like genuine persons rather than stock types, it is often enough in action films that the characters fill clear roles and possess a recognizably human trait or two. In this scene, Renner’s function is to verbalize what we’re all thinking: Tom Cruise must be nuts to climb this building. (Paula Patton also shows up primarily to voice her incredulity.) Simon Pegg’s Benji is little more than the likable fellow who sits at a laptop and explains things, but his nervous enthusiasm adds another shade of emotional energy to the proceedings, and in the end his comical reaction signals that we can stop holding our breaths and laugh in relief at what we have just witnessed.

Most centrally, there is Cruise’s Ethan Hunt. On paper, Hunt has little personality beyond that of a rather standard good guy action hero, which is to say he tries to save the lives of innocents while beating the crap out of evildoers. Characters in films are often defined by the actors who play them, but this is rarely as true as it is of Ethan Hunt, who is primarily an avatar for Cruise’s willingness and ability to do seemingly impossible things. One way to test whether an action scene is rooted in character is to ask whether anyone else would do the same things the same way. Any action hero might pursue Nazis on horseback to recover the Ark of the Covenant, but only Indiana Jones would do so with a twinkle in his eye and the self-deprecating declaration, “I’m making this up as I go.” Similarly, only Tom Cruise’s Ethan Hunt would climb the tallest building in the world just so his pal can hack into some security cameras or whatever. As Hunt, Cruise does a great many superhuman feats, but is surprisingly good at seeming like a normal human while doing so. No normal person would drive a BMW straight down a three-hundred-meter drop, but if they did, they would seem as scared as Tom Cruise does. With Bird behind the camera, Hunt has something of the elasticity of a cartoon character, boundlessly energetic and able to endure ridiculous amount of physical punishment, but he is not a stoic. He makes mistakes; he acts believably desperate and flustered. “Your line’s not long enough!” Renner calls to Hunt, who hangs thousands of feet in the air and exasperatedly replies, “No shit!”

Finally, there must be complications. If the centerpiece of Mission: Impossible – Ghost Protocol was a sequence in which Tom Cruise’s plan to climb the tallest building in the world went off without a hitch, it would still be an impressive technical achievement, but it would not be a great action scene. Action in film depends upon escalation. Hunt’s magic gloves quickly fail him; his blowtorch malfunctions and sends a shower of sparks into his face, which would be annoying in any context, but here sends him plummeting several stories. Of course, after he has gotten to the place and done the thing, there is the matter of getting back without gloves or an elevator, so naturally, Tom finds a rope and goes rappelling down the side of the building and swinging through the air to get back to his friends, who form a chain to save him like that bit with the penguins in VeggieTales. It’s utterly preposterous if you think about it too much, but that’s the last thing Mission: Impossible wants you to do. Action in film works like a dream, which is to say it is primarily concerned with the realm of the desires, not the intellect; as in a dream, we will the rules of real world logic away so that the desired result might come to pass. Early on in Ghost Protocol, after Cruise pulls some implausible maneuver to divert the attentions of a Russian kill squad and make his escape, Renner asks, “Why would that work? …I mean, what did you assume they’d be thinking?” Cruise merely flashes his toothy grin and says, “I didn’t assume they were thinking.” Of course he didn’t; why would you be thinking when you’re clutching your armrest and holding your breath and watching him leap right off of the tallest building in the world?

Inside A Scene: The Bourne Supremacy