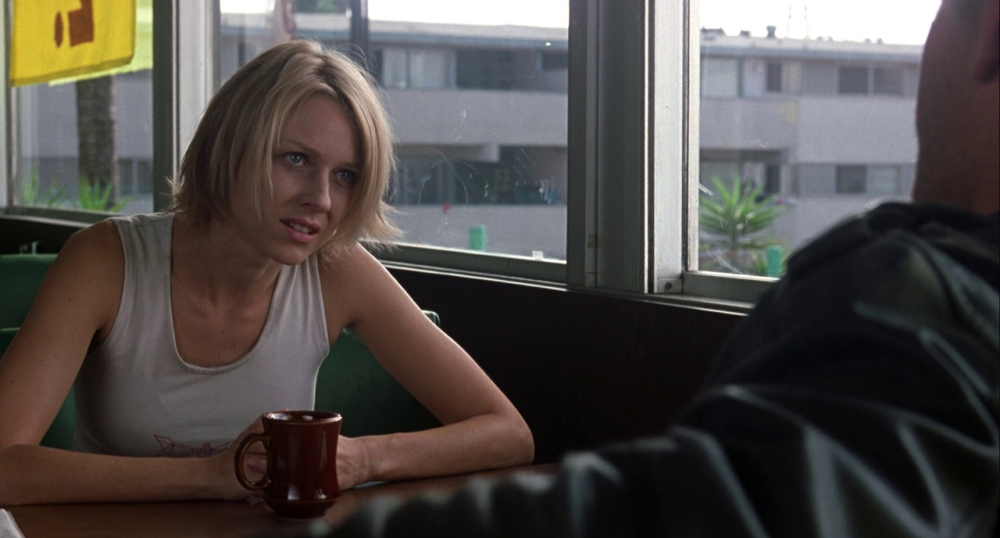 More than any director, David Lynch has figured out how to capture the disorienting logic and nightmarish sensibility of a dream on celluloid. His entire career has been defined by puzzle box narratives, ones that seem fragmented upon an initial viewing but come together quite nicely through introspection and thematic implication. Perhaps the apex of Lynch’s career as a director is Mulholland Drive (2001), a project which began as a pilot for ABC and then further evolved into what many consider Lynch’s cinematic masterpiece.

This isn’t surprising, given that Mulholland Drive is all about dreams. Indeed, this film blurs the lines between what is reality and what is dream, and how the two often intersect. On an initial viewing, Lynch’s narrative seems scattered, often moving around to disconnected sequences and moments that seem to have very little to do with the main narrative. But as the film reveals its major twist in the third act, the entire experience becomes contextualized — and the adage that “it’s all a dream” is something meant to be taken quite literally here. By the end of the film, Lynch has provided his audience with the tools to understand his nightmarish story about a disillusioned actress caught up in the woes and evils of Hollywood. Even the most seemingly inconsequential scene becomes important in decoding the twist narrative Lynch has built — and digging even further into the thematic meaning behind it all.

There is an infamous sequence early in the film that takes place at a diner, known as Winkie’s, which inconspicuously looks like a dirty Denny’s out in the middle of Hollywood. Here, a detective known as Dan (Patrick Fischler) speaks to his partner, Herb (Michael Cooke), about a recurring dream that he’s been having. After all, it’s the reason why Dan has decided that the duo should eat at Winkie’s in the first place. In the dream, it’s accordingly half-night but inside everything looks normal. Dan is frightened, and he sees Herb, standing across from him, also frightened. And Dan knows why — because there’s a man, living behind the restaurant, with a horrible face that Dan can’t forget, and he reasons that’s the cause of the nightmare. This is why he’s picked this place, to try and confront his fears.

The scene terrifyingly changes its tone when Dan looks up to see that Herb is now standing in the position he was in during the dream. Reluctantly, Dan leaves with his partner and the two venture behind the restaurant, to a concrete alleyway. In one of the most frightening passages of the film, the two slowly walk towards a wall, something horrible concealed behind it. Even though it’s daylight, the mood is entirely uneasy, and the scene culminates in the reveal of The Bum (Bonnie Aarons), who terrifies Dan so viciously that he falls into Herb’s arms. The sound in the scene cuts completely as The Bum disappears behind the wall again, as if it were never there.

It’s almost a difficult scene to describe simply because it plays off Lynch’s ability to craft dreamlike imagery and logic through clever editing and atmosphere. Even more peculiar is that the sequence seemingly has nothing to do with the story at large. The diner scene comes after Rita (Laura Harring) escapes being murdered and hides away in Betty’s (Naomi Watts) aunt’s apartment. Indeed, it feels like a strange aside that has very little to do with Betty or Rita.

But the story isn’t quite as it seems. Betty and Rita’s journey reveals a startling revelation that completely turns the film on its head. To understand the context of the diner scene, and every other seemingly random moment from the film, it’s important to understand the plot of Mulholland Drive at large. For the first two acts of the film, what we experience is nothing more than a dream of Diane Selwyn’s (Naomi Watts, in a dual role). In the real world, Diane is a struggling actress who was in a complicated relationship with a fellow actress, Camilla Rhodes (Laura Harring, also in a dual role). Camilla was manipulative, teasing both Diane’s emotions and desire to get ahead in the industry. A complicated romance blossomed, but when it became clear that Camilla only intended to use Diane, the latter sought to have her killed off by the mob. With the deed done, and Camilla dead, Diane struggles to come to grips with the dark decision she’s made.

The dream is Diane’s way of trying to comprehend the fallout of her actions, but only results in her trying to distance herself from her own guilt. This is an idealized version of the world she wishes she lived in. Betty is the perfect version of Diane, a talented actress with only the best qualities, while Rita is a more helpless, tender version of Camilla. Instead of competing, the women work together, and Diane envisions Betty aiding Rita on a search to find her true identity. But that becomes a double-edged sword — even though Diane tries to hide away in her dream, the truth begins to resurface in strange and terrifying ways. After all, every dream must end, and we must all wake up at some point.

What does any of this have to do with the earlier scene at Winkie’s? Consider the idea of dream logic. Anytime that Diane feels that she’s getting to close to the truth, the story cuts to a seemingly unrelated event, whether it’s a hitman comically failing to do his job cleanly or director Adam (Justin Theroux) having all control of his life and career wrested away from him. Diane’s feelings are embodied here in these other characters, who are differentiated versions of real-life people. These moments occur whenever Camilla seems to lose consciousness.

The diner sequence near the beginning of the film symbolizes many things. The setting of Winkie’s itself is seen later in the third act, when Diane meets with Joe the hitman (Mark Pellegrino) about having Camilla killed off. The fear that Dan felt in his dream is the fear that Diane felt in the real world about possibly being found out as a co-conspirator in Camilla’s murder. Indeed, even in the real world, Diane sees Dan across from her table, staring at her just like Dan saw his partner. We even understand why Diane chooses the moniker Betty — she’s helped by a waitress who has the name on her name tag. These two scenes completely mirror one another — so the earlier scene can be viewed as Diane trying to process her guilt by assigning her fear to another person.

What of The Bum, the demon that hides behind the building? While Lynch’s narrative proves to be more revealing than it first appears, he’s done something fascinating by leaving out every answer to this puzzle. In true Lynch fashion, he has never revealed the truth or meaning that he intended behind images and ideas, wanting the audience to come up with their own theories. Since Lynch has given us enough context once the deconstructed nature of the narrative is worked out, figuring out what imagery like the Bum represents is certainly doable, if totally open to interpretation. If the story is about dreams, then it seems that The Bum represents Sleep itself. To explain its hideous appearance, Sleep is ugly because it represents a truth that is being hidden away. Diane refuses to acknowledge the horrible thing that she has done by having Camilla murdered, and so she tries to hide away in a dream. But Sleep is not eternal, and The Bum is frightening because it’s a reminder that Diane will need to face the truth. 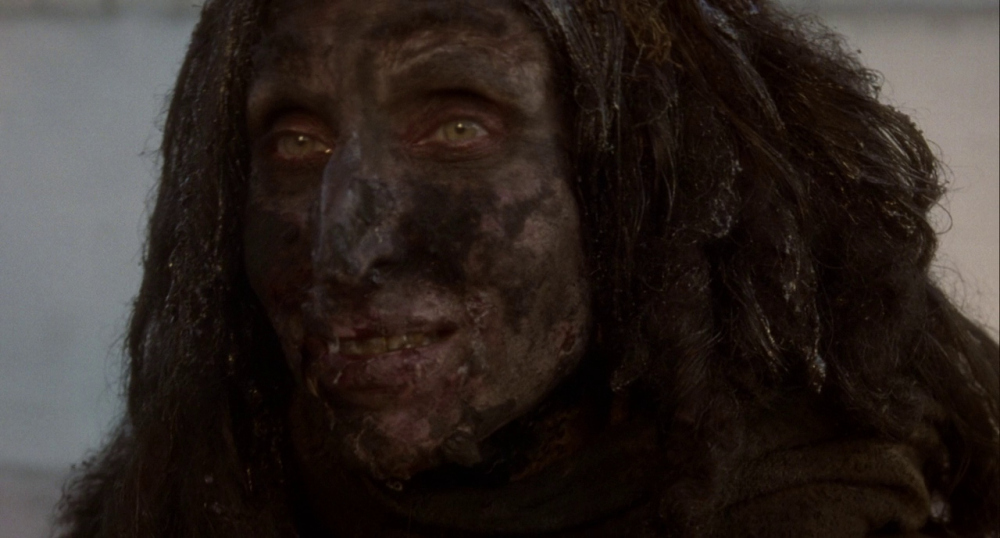 Contrast The Bum with the woman at the end of the film that utters, “Silencio.” If The Bum is Sleep, then the blue-haired woman must be Death — and she is beautiful because death is an eternal thing, a more true release from reality than Sleep could ever be. In the diner scene, she is not strong enough to confront the truth. She has to assign the role to another person, in this case Dan. When The Bum reveals itself, Diane is frightened by the prospect of waking up, and so the story returns to Betty and Rita, a version of the real world that Diane wishes were true. But perhaps this is why Diane chooses to kill herself in the end, tormented by visions of the past and mounting guilt for the death of her lover. She cannot face the truth, so she seeks the only real release possible — death, in this instance. Mulholland Drive, ultimately, becomes about the weight of reality, and how inescapable it truly is. We may assign our fears and regrets to new faces, or try to hideaway from the facts in fantasy sequences. But Truth, like Death, is eternal. It cannot be changed.