NOTE: The newest film by the Coen brothers, The Ballad of Buster Scruggs, is an anthology of six short stories set in the American Old West. In my recent review, I interpreted the Ballad as an “American mythology of sorts, dramatizing the formation of government of the people, by the people, for the people from the raw material of man and nature.” Though I was able to discuss most of the stories in some detail, I had to neglect my personal favorite for concision’s sake, and it is that segment that this essay will focus on.

The third and bleakest segment of The Ballad of Buster Scruggs, “Meal Ticket,” is a tough sell – a slow moving, visually muted tragedy featuring two nameless characters who hardly speak to one another. One is almost mute, uttering no more than a dozen lines; the other speaks only in quotations. Out of the Coens’ entire eclectic filmography, “Meal Ticket” most recalls the ordeal of the hapless artist in the similarly downbeat and wintry Inside Llewyn Davis. It centers on a limbless performer (Harry Melling) – “The Wingless Thrush,” an advertisement informs us, “Thespian Orator and Popular Entertainer” – and the hulking, fur-clad impresario (Liam Neeson) with whom he travels from frontier town to frontier town, trying to eke out a living with dramatic recitations of Shakespeare, the Bible, Shelley’s Ozymandias, and Lincoln’s Gettysburg Address.

As a treasury of art and culture, of high ideals and stories that stir the heart, the orator represents the rational part of man – the intellect, or the “head,” to use C.S. Lewis’ terminology from The Abolition of Man. The impresario, who lumbers about wearing a coat of fur and communicates primarily with grunts, is the animal part; the appetites, or the “belly.” When we enter the story, the two exist in a relatively stable state of equilibrium. The impresario, who drives the carriage, quite literally carries the orator around the world, as the body carries the soul; he feeds him and sets the stage for him, even helps him urinate. The soul depends on the body for physical life and the body depends on the soul to make life meaningful – to make life worth living. The orator’s performances make enough money to sustain the two on their travels, and in so doing give shape and direction to the impresario’s existence. Notably, we learn through mumbled lines of dialogue that the impresario found the orator on the streets of England and brought him across the Atlantic to perform – in essence, bringing the culture, history, and tradition of the European Old World to the New World of America. Yet the orator, when the impresario found him, was “motherless and penniless;” devoid, that is, of the familial bonds that tie the soul to the earth, and of the money needed to care for his bodily needs. The two characters (which is to say, the two parts of man) need one another. They depend on each other in a symbiotic relationship. 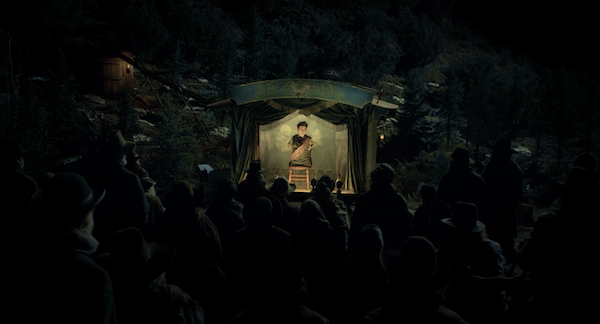 During the first performance we see, the audience is spellbound. The stage on which the orator performs is the lone bright spot in a dark and brutal world; one recalls the Coens’ Hail, Caesar!, which lauded movies as “portions of balm for the ache of a toiling mankind.” In both instances, the arts offer a respite from the labor with which humanity must meet its simply material needs. The orator concludes with Puck’s speech from the end of A Midsummer Night’s Dream, in which he declares, “These our actors, as I foretold you, were all spirits, and are melted into air, into thin air.” The orator lifts men’s gaze up above the materials of the world and invites them to contemplate things immaterial. Yet ideals are only vapor if they do not take root in the hearts of men. Shortly thereafter, camping in the woods, the orator looks up to the heavens, catching the falling snow on his tongue, but the impresario, in contrast, looks broodingly down at the ground.

The relation between the mind and the body, the head and the belly, the rational and the animal, grows subtly unbalanced as the impresario becomes increasingly involved with the performance. When the orator rehearses the story of Cain’s murder of Abel, the impresario rattles a metal sheet to provide the sound of thunder – effects that create sensible spectacle beyond the mere word. We see him applying makeup to the orator, dressing him up to perform. Mere intellect does not draw crowds; it must be decked out in pageantry that attracts the appetites. Yet the impresario’s attempts to improve the performance do not help to bolster attendance. The audience dwindles. One person unceremoniously gets up and leaves in the middle. Worse still, the substance of the performance is lost; in a montage, the orator’s recitations are chopped up into jumbled fragments devoid of context or purpose – only “sound and fury, signifying nothing,” to quote a different Shakespeare play.

As the influence of the orator slowly wanes, he is neglected more and more by the impresario, who gets drunk by the campfire and sings a vulgar, nearly unintelligible song about a woman being hanged and killed – a sort of art that appeals only to simple passions. Shortly thereafter, the impresario walks into a brothel with the orator strapped to his back, and turns him around so he cannot see the subsequent encounter. When sex is corrupted by commerce and stripped down to its most carnal expression, it becomes a mere physical act from which the intellect is excluded. The next performance takes place on a bleak and windy night, attended by a scant three viewers, none of whom are willing to pay. The discouraged orator trails off without even finishing his act.

As the impresario closes up the carriage, he hears the sound of a crowd and wanders into town to find an audience gathered around the “Genius of the Barnyard” – a chicken that can do math. People call out simple equations and the bird pecks the results. “He has no formal education,” boasts the chicken’s keeper. Sadly, the public has tired of the orator and what he represents; instead, they have gathered around to watch an animal performing mechanical functions, an act entirely lacking imagination or spirit. By the demand of the people, the human has been replaced by the inhuman, and the impresario buys the chicken. As a mere beast, it is easier to care for than the orator. It can be bought and sold, it does not complain, and it needs only a bag of chicken feed for sustenance. (Though the Coens likely intended no such reading, it is not hard to see the “Pecking Pythagorean” as a metaphor for, say, Netflix and its algorithms.)

In the end, the story of Cain and Abel, dramatically recited by the orator throughout, comes true. As they watch the chicken, the impresario cannot meet the neglected orator’s accusing gaze. (Neeson and Melling convey a wealth of feeling through physical posture and facial expressions; their work is indispensable to the story’s impact.) It is unclear how quickly the orator discerns his fate. His recitations of “Ozymandias” seem to foreshadow it, and by the time he is helplessly watching his keeper drop a rock over the edge of an abandoned bridge to test the waters below, there is little question of how this story will end. The Coens fade to black, mercifully, as the impresario consigns the orator to the darkness like a stone, an inanimate thing. 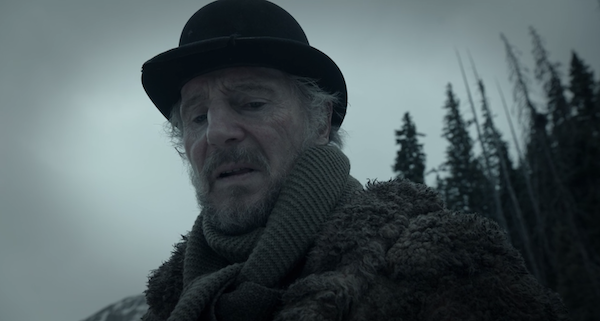 In his recitations of the Gettysburg Address, the orator spoke fervently about “government of the people, by the people, for the people,” but in the darkest of tragic ironies, the people are the ones who tire of him. In this, it is not difficult to discern the contours of the Coens’ commentary on American society. As the impulses that lead to democracy and egalitarianism are taken to their natural extremes, high art and culture are left at the mercy of an ill-informed public’s fickle taste. When man’s passions are unchecked, he tends to abandon what is old and chase after novelty, but without respect and reverence for the history and tradition represented by the orator, a society devolves into a mere congregation of animals like the impresario, unable to look for anything beyond immediate, tangible stimulation and sustenance. In a materialist society, beauty is quite literally useless. Ornamentation is extraneous, unconcerned with function or practical utility. Purely useful things keep the body alive, but beauty keeps the soul alive. “Meal Ticket” is a comment on America, but it is also a comment on each of us, for a picture of a nation always doubles as a picture of an individual. Men govern nations, but they must also govern themselves. How often we tire of our ideals and allow ourselves to be tyrannized by our basest appetites; how often we choose to be animals rather than men. But The Ballad of Buster Scruggs warns that the brute is inevitably reduced to a wanderer, a vagabond. For him, there is no warmth left in this cold world, only white oblivion.

Fantastic Beasts: The Crimes of Grindelwald – A Dissenting Opinion