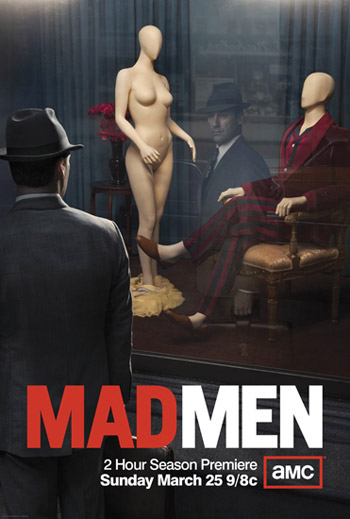 FilmFisher is proud to host a collaborative series of “Inside A Scene” essays on the television show Mad Men, covering crucial scenes from each of the show’s seasons. Last week, Robert Heckert wrote about a crucial turning point in the fourth season’s finale, “Tomorrowland.”

Of the 92 episodes produced over the course of Mad Men’s seven seasons, it is nearly impossible to select a single favorite – but if I had to, there is a good chance I would select the fifth season’s “Signal 30.” Directed by series regular John Slattery and co-written by Frank Pierson, who wrote Cool Hand Luke and Dog Day Afternoon, the entire episode is an inspection of flawed ideals of masculinity, and the self-loathing felt by men who cannot measure up to them.

Mad Men is a show with a distinct psychological emphasis, often observing its characters’ behavior in a way that invites us to discern the unconscious insecurities that drive their actions, and rarely does it probe the fragile egos of its cast more directly and fruitfully than it does here. The main thrust of the episode is twofold, centering on Pete Campbell and Lane Pryce, two men who feel they are inferior to others, and are compelled to prove otherwise. As the episode begins, Lane, a British expatriate, is falsifying enthusiasm over the World Cup to placate his homesick wife. Meanwhile, Pete, who has always lived in Manhattan, is learning to drive a car for the first time, which makes him the only grown man in a classroom of teenagers. Both humiliating situations double as opportunities: Pete meets an attractive girl and Lane meets an executive from Jaguar, who may offer the firm new business. The two men are pursuing gratification in different spheres – Pete in sexuality, Lane in the work world – but both are entering territory forbidden to them. Pete is married, and Lane is a financial officer, not an account man. Their forays into new worlds stem from nagging dissatisfaction with the lives they are supposed to be living, and their ennui sets them at cross purposes, leading them to a disastrous confrontation.

Lane brings the Jaguar account to his fellow partners, trying to prove his usefulness to the firm, but he is ill suited to the role of account man and quickly finds himself pushed aside in favor of Pete, who leaves Lane behind while taking the Jaguar executive to dinner and, at his subsequent request, a brothel. As the scene begins, Lane storms angrily into a meeting, having received word that these exploits have placed both his account and the executive’s marriage in jeopardy. His first action (not shown in the clip below) is to send Joan out of the boardroom, so that it is occupied only by men. He then berates the others for “corrupting [his] friend.” This phrasing (“corrupting”) puts Lane in a position of moral superiority and frames the account as something of personal significance (“my friend”) – indeed, Lane heard about the disastrous aftermath from his wife, who heard it from the executive’s wife. Yet Lane’s language is not entirely accurate, and seems calibrated slyly (and perhaps unintentionally) to exaggerate his own importance. It is a stretch to call a man he met mere days before and viewed primarily as a business opportunity a “friend,” and when the others laugh at the unintentional humor in the way the executive was found out – “He was caught with chewing gum on his pubis!” – it is his ego that bristles. “How dare you laugh at this?”

“It was Edwin’s idea,” Pete says, truthfully, laughing as if Lane’s discomfort is unimportant. Throughout the episode, the licentious Pete complains that others are criticizing him for his lack of virtue, though in most cases no one is saying anything, and it is not difficult to discern that Pete is merely projecting his guilty conscience onto others. Pete took the opportunity to indulge his own lusts during the ad men’s visit to the brothel, but it is true that Edwin suggested the idea, and perhaps Pete is glad that he can finally shift the blame plausibly onto someone else. Nevertheless, when Lane protests, Pete shifts immediately to the offensive. He protects himself first by attacking Lane’s sexuality – “He didn’t ask you because he thinks you’re a homo” – and then his abilities in the workplace: “I was doing my job.” These two statements are dual affirmations of Pete’s masculinity, and they are also excuses for his infidelity: his having sex with a prostitute is proof both of his virility as a man attracted to women and his dedication, as an executive, to his career. Earlier, we saw that Pete and Lane sought gratification in the spheres of sexuality and work, respectively; here, the two spheres are on an unruly collision course, as the two men strike ruthlessly at each other’s anxieties.

“It was my account!” Lane, already insecure about what he perceives as uselessness to the firm, blusters in an attempt to fight back, but Pete presses his advantage, attacking this point directly: “Your account? You have no idea what you’re doing. In fact, as far as I can tell, our need for you disappeared the day after you fired us.” Bert Cooper steps in here to reproach Pete, but too late: Lane rolls up his shirt sleeves, preparing for a fight, and accuses, “You’re a grimy little pimp.” The playing field shifts to the world of physicality, sexuality, where Pete is at a disadvantage both moral (“pimp” recalls the brothel visit that prompted the fight) and physical/sexual (“little” needs no explanation). Pete is incredulous to find the office suddenly revealed as another world where men are measured by bodily strength or weakness; earlier on, the girl in driving class was stolen away from him by a more age-appropriate boy, cartoonishly nicknamed “Handsome.” However, when challenged, Pete cannot back down without losing face. The stoic Bert Cooper shares his distaste for such a corporeal contest – “This is medieval,” he complains dolefully – but carnal Roger Sterling’s interest is piqued. “I know cooler heads should prevail, but am I the only one who wants to see this?”

Lane, of course, is victorious, and takes this as an opportunity to assert his workplace superiority: “Consider that my last piece of advice.” Pete, even in defeat, must save face, and refuses help from Don and Roger before staggering off, bloodied and bruised, to sulk alone in his office. However, neither party emerges from the scuffle feeling better. Though the fight was started by Lane’s condemnation of Pete’s promiscuity, he is so exhilarated by his victory that he attempts to kiss Joan immediately afterwards. “What do I do here, truly?” he asks, seeking affirmation of his importance to the firm. Though she encourages him that he is essential, he seems unconvinced: “You could do it.” It denigrates Lane’s masculine ego that a woman could do his job, so he seeks gratification elsewhere, just like Pete. “If they’ve tried to make you feel you’re different than them, you are,” Joan says. “That’s a good way to be.” Yet Lane responds to this by making a sudden advance on her, proving himself no different than the others, after all.

Pete, meanwhile, finds himself sharing an elevator with Don, who is meeting his wife for lunch. Reminded, perhaps, of his own failings as a husband, Pete accuses, “I’m not as virtuous as you, so you just cut me loose.” When Don points out, accurately, that there was nothing he could do, Pete continues: “Why are we even having a fight at work? This is an office. We’re supposed to be friends… I have nothing, Don.” It is easy to point out that Pete is being melodramatic. In fact, he has everything that he is supposed to want: a pretty wife, a child, and a house in the suburbs. But the source of Pete’s anguish is spiritual, not to be truly assuaged by any material remedies. The episode closes with Pete bitterly watching a surreptitious sexual encounter between his young rival and the girl from his driving class. He sneers at Don’s “virtue” because, on some level, he knows that his misery stems from his own vicious desires.