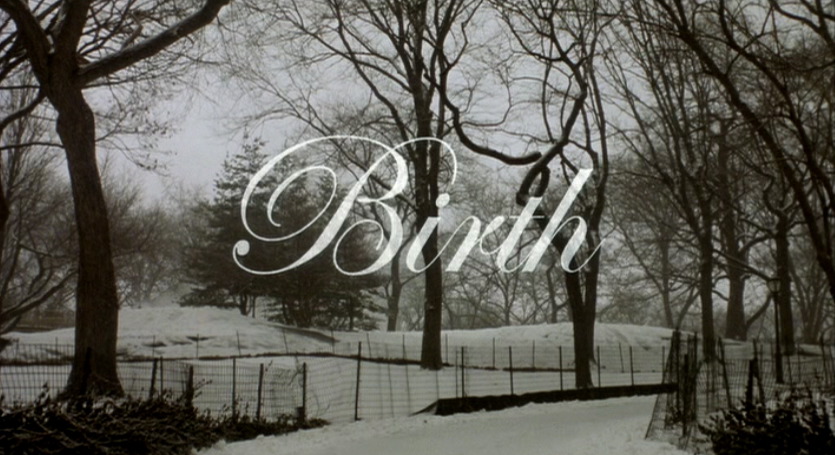 Over the next several weeks, I will be analyzing a host of scenes from Jonathan Glazer’s criminally under-appreciated Birth. When the film was released a decade ago now, I was living on the south side of Chicago, saw the preview at home, and spent twelve dollars on public transit to make it to the north side and the sole theater where the film was screening. The following day, directly after I got off work, I spent another twelve dollars on public transit to get back to the theater and see the film again. One wedding and two children later, I own the film, have seen it nigh twenty times, and it is no less beguiling, perplexing and mysterious today than it was at first.

For now, I want only to treat on the prologue to the film, which is deceptively simple. Please have a look before reading on.

Okay… let me say this. Let me say this. If I lost my wife and, uh, the next day, a little bird landed on my windowsill, looked me right in the eye, and in plain English said, “Sean, it’s me, Anna. I’m back…” What could I say? I guess I’d believe her. Or I’d want to. I’d be stuck with a bird. But other than that, no. I’m a man of science. I just don’t believe that mumbo-jumbo. Now, that’s gonna have to be the last question. I need to go running before I head home. Okay. Oh. Excuse me.

Birth is a film of profound reversals, which is to say it is a fundamentally human film. Man is born sinless and powerless, though eventually he created Auschwitz and brought Hiroshima to rubble. Man is born naked, though he will kill for a pair of shoes. Man is born a poor helpless creature, though he will judge angels. Man is born drinking the white blood of his mother, though he makes the ground drink the blood of Abel. Man is born a living spirit, though he dies as God made flesh. If the prophet Aeschylus can be trusted, to be human is to change, to shift, and that shifting is the essence of human tragedy. Inasmuch as he is rational, man is angelic, but man is also mortal, and so be is like a beast. Man is the only beast given to contemplate his own death, and in this, man is alone in the cosmos. No other creature is anxious for its own death. While man can improve his lot by wisdom, that improvement is for nothing because it ultimately terminates in the grave. Insofar as the plot of Birth is concerned, the reversals are intellectual and might be overcome. Insofar as the visual themes of Birth are concerned, the reversals are metaphysical and everlasting. Birth is the Platonic myth of eternal becoming.

The viewer intuits quickly that the black-clad runner is the science professor whose lecture we hear in the voice over. We hear the end of his lecture, but “Okay… let me say this. Let me say this” also sounds like a man pleading for his life, a man making a final plea as his captors close in with knives. The prof, whose name is Sean, has apparently just concluded a lecture wherein it seemed reasonable that a student should ask about whether he believed in reincarnation. Something about the lecture has made it seem to his students that Sean might believe man’s soul was immortal and transient, passing from body to body. Has he been rightly understood? “Do you believe in reincarnation, doctor?” If a speaking bird claimed to be his dead wife, “I guess I’d believe her. Or I’d want to.” That caveat of wanting to believe looms large over the remainder of the narrative, in which Sean’s widow oscillates back and forth between believing a no less bizarre claim than that of Sean’s hypothetical bird.

Sean runs through Central Park and the camera follows along a few paces behind and a few feet over his head. The perspective might suggest someone is chasing Sean, or it might be an adjusted first person perspective, in which we’re moving at the same pace and in the same direction Sean is moving. In the case that it is meant to be a first person perspective, we’re shown Sean’s figure to indicate that he is thinking about himself. Whenever I come to such a choice, I generally take both. Sean is being chased and thinking of himself. He chases himself.

Life is brief. At the 2:31 mark, Sean passes through a dark tunnel and the moment betokens his birth. Before we see him escape the tunnel, the shot cuts away for the first time and the title of the film appears on the screen, though the title also functions as a cue card, as in a silent movie, indicating what has just happened (as Sean is born, the word “Birth” appears). At this point, the perspective changes. Prior to Sean’s birth, we looked forward, as did he. After his birth, we immediately begin looking back at him and the camera inches away from Sean. At the 2:50 mark, we see that the camera is backing into a dark tunnel, almost as if to lead Sean into a dangerous place. The camera is not so much following Sean anymore, but anticipating his movement. The camera knows where his path leads, and sees him face to face. Sean is no longer presented as a decision-making agent who might veer off to the left or the right on rabbit trails which he has bypassed. His fate is sealed.

Birth and death are indistinguishable. Sean’s birth occurs when he passes out of a tunnel and his death occurs when he passes into a tunnel. The womb and the tomb are interchangeable. When Sean stops, coughing and then collapsing, the camera continues pulling away from him and what we see is an inversion of the twentieth century myth of meeting God in a bright light at the end of a tunnel. The light at the end of the tunnel continues to dim and the shot fades just as we’re pulling out of the tunnel into a light Sean would never reach.  When we see Sean’s corpse at 3:28, his body is oriented from the left side of the screen to the right, where his head rests. When the infant appears a moment later, the infant is oriented in the opposite direction; his head is on the left side of the screen, his feet on the right. Both figures are presented horizontally, though. Westerners read a shot from left to right, just as we read text in a book. Our eyes come to rest on the right, so dominant characters and ideas tend to be situated where our eye lingers (in a conversation between two characters, you’ll often find the scene cut so that the speaker is always on the right, not the left). In depicting the dead Sean, his head is at the right because his intellect is essential; his intellect is departing. After we see his corpse, the shot unexpectedly returns to the long slow pull away from the tunnel, though the narrative eye represents Sean’s perspective once more. His soul pulls away from his body and suddenly finds itself anew in an infant.

Sean dies in snow and the child is born out of water. His soul was has been purged by fire and that purgation has melted the chilliness with which he exited life. Will he die in the cold again? Will he learn in his second life all he failed to learn in his first life? A brilliant prologue suggests such questions, but asks neither of them outright. Some questions are asked with images.