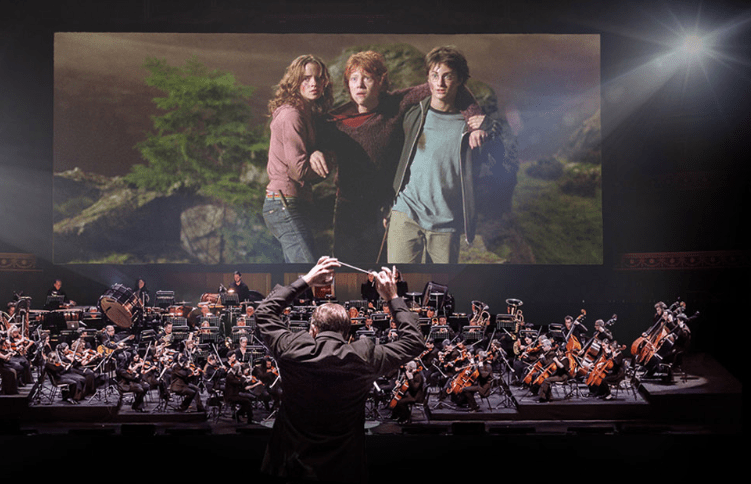 Smells and songs are some of those instruments of nostalgia that hit you like waves of dizziness when you’re not expecting them. That wooden, dusty aroma I can only associate with an old hobby shop from my childhood — an indescribable whiff of a memory that dissipates before I can grasp it. Pictures and objects rarely feel that way for me, because I can hold them and look at them as long as I want. It’s the music from our pasts that, like scents, proves so alluring and elusive, slipping through our fingers into time before we can fully understand what we’ve experienced.

A composer for a film series has the power to recall and interweave memories through recurring musical themes, or leitmotifs. In Harry Potter, the one leitmotif featured in every movie is “Hedwig’s Theme,” which is sometimes uneasy, sometimes mischievous, and always magical. John Williams crafted at least a dozen similarly classical, recognizable, and grand pieces in his Oscar nominated soundtrack to Harry Potter and the Sorcerer’s Stone. The film ends with the wistful theme, “Leaving Hogwarts,” where Harry is given a photo album with moving pictures of the parents he never knew. Needless to say, a lot of people teared up when this leitmotif was brought back for the last scene in the last film, in which audiences had to say their own goodbyes to the series.

John Williams also received an Oscar nomination for his third and final Harry Potter score for The Prisoner of Azkaban, after which later composers opted for a more subtle, modern approach to the music, with fewer leitmotifs and distinct melodies. Prisoner of Azkaban is distinct because it retains the bravado strength and complexity of a great composer, while forcing him to adapt to a new, stylistic director: Alfonso Cuarón.

The music that resulted from this relationship is rustic, medieval, and magical in a different way than Williams’ previous work. Rather than sounding generally orchestral and stately, the core of Azkaban’s soundtrack features a strong emphasis on instruments that feel untamed and breathed out of the forest, like woodwinds, chimes, and timpani drums. Jazz marks the insane antics of the Knight Bus and Professor Lupin’s first Boggart lesson, while a wizard youth-choir’s rendition of “Double Trouble” from Macbeth becomes a recurring, mischievous melody to remind viewers that “something wicked this way comes.” With the mystery of Sirius Black and Peter Pettigrew delving into treachery, lies, and murder, such foreboding verses from Macbeth are quite fitting.

Also foreshadowing impending danger, but in a less playful way, is the subtle leitmotif of discordant, quivering strings and unnatural piano smashes. These shrieking, crawling, almost untuned sounds are initially associated with the supposed murderer, Sirius Black, and his spectral hunters, the Dementors, but later slip in with Harry’s first use of the Marauder’s Map (sneaking through an underground tunnel) and his second (a nocturnal corridor search for Peter Pettigrew). Both foreshadow the climactic confrontation in the Shrieking Shack, where Harry sneaks through another underground tunnel, enters an old house full of creaking floorboards and meets both Sirius Black and Peter Pettigrew in a chase that involves a rat running across the keys of an untuned piano. The line between soundtrack and sound design is blurred, transforming the Shrieking Shack into an anxiety inducing, fully realized, and tonally vivid setting.

Of course, Sirius Black and Peter Pettigrew’s confrontation is important because one of them betrayed Harry’s parents to Lord Voldemort, resulting in the double murder that gave Harry his scar. Harry starts the film an orphan, angry at his aunt’s disparagement of his parents and finding solace only in his moving picture of them, from the first movie. At this moment of brief calming, Williams introduces the serene, lonely theme “A Window to the Past.” The leitmotif returns when Harry has conversations with Lupin and Sirius, both potential father figures who knew and loved his parents.

This longing for a connection with the father and mother he never knew is the heart of the story. Harry is uniquely affected by the fearful and despair-inducing Dementors, hearing the scream of his murdered mother every time they drive him to passing out. Professor Lupin tells Harry that Dementors feed on the happy memories of their victims and that the only way for him to fight them off is to use his own happiest memory to call forth a luminous Patronus, or protector. Although the sweeping, beautiful music of “Buckbeak’s Flight” suggests a power in the joy of flying, that joy is tainted by a nightmarish intrusion of Dementors in a Quidditch game and Harry’s attempt at using the memory of riding a broom for the first time fails. The memory is not strong enough. However, his second Patronus succeeds. The music of a heavenly polyphony comes in, aided by the harmony of “A Window to the Past,” revealing the encouraging memory he’s drawing on to fight the fear and despair. It’s one of his parents.

This leitmotif returns when Harry thinks he sees his father by the lake and during his last Patronus against the swirling vortex of Dementors. Along with the melody of “A Window to the Past,” the unnerving choir of the Dementors is replaced by a glowing, warm one, and a magnificent pulsating sound comes in, an amplification of the pulsing sound Snape’s small, illuminating lumos spell made earlier in the film.

“A Window to the Past” plays for the last time when Sirius is saying goodbye to Harry before he flies off on the hippogriff, Buckbeak. In the original screenplay, Sirius tells Harry to trust himself and look for the answers in his heart, but a revision during production changed his words to, “The ones who love us never really leave us. And you can always find them, in here.” Slipping in at least 11 times in the film, this nostalgic melody explores what it means to long for a loved one who is long gone, a past you never knew. To take a grasp at the spiritual depth of such yearning music, one might even suggest it’s desiring a Father you cannot see.

Soon after Sirius departs, Lupin also leaves, his jazz music making a final appearance on an old record player before the necessity of packing up cuts it short. With both men gone, it seems as though Harry’s “window to the past” has been closed. It seems that the past has been defeated by the ceaseless procession of time, represented by the Hogwarts clock tower whose relentless ringing of bells caged Harry throughout the film, present every time he found himself trapped within the castle. By the end, the classic ticking clock theme, “Forward to Time Past,” has rushed Harry and Hermione through their time travelling mission, in and out of the clocktower before a single second has passed, but the victory may only be temporary. They’ve conquered time physically and visually, but have they won musically?

With both his broom destroyed and Buckbeak gone, Harry is grounded until the last scene, when he receives a new broomstick from Sirius. Hedwig’s theme plays for a moment before Harry rushes out of the clocktower, past the swinging pendulum, and kicks off into the sky — not with “Buckbeak’s Flight” but “Mr. Longbottom Flies,” the melody that played when Harry first rode a broom. That memory, of flying for the first time, was too weak to help Harry produce a Patronus against the boggart, but is now linked with Sirius and strong enough for an explosion of joy. All the good memories — flying, words about his parents, Sirius — tie together in a triumphant victory over time. And, you know what the best part of it is?

The film ends on a freeze frame.

John William’s soundtrack for The Prisoner of Azkaban is more than just a collection of recurring theme songs. It’s a tapestry of detail, where every thread of music crosses several other themes, finding new meaning in each interaction. The score tells an underlying story that branches out from its predecessors while still maintaining a relationship with them. It’s a story of fear and danger, of life passing before our eyes and a longing for a love that we cannot see. In other words, it’s the human story. And for that, I hope it is never forgotten.