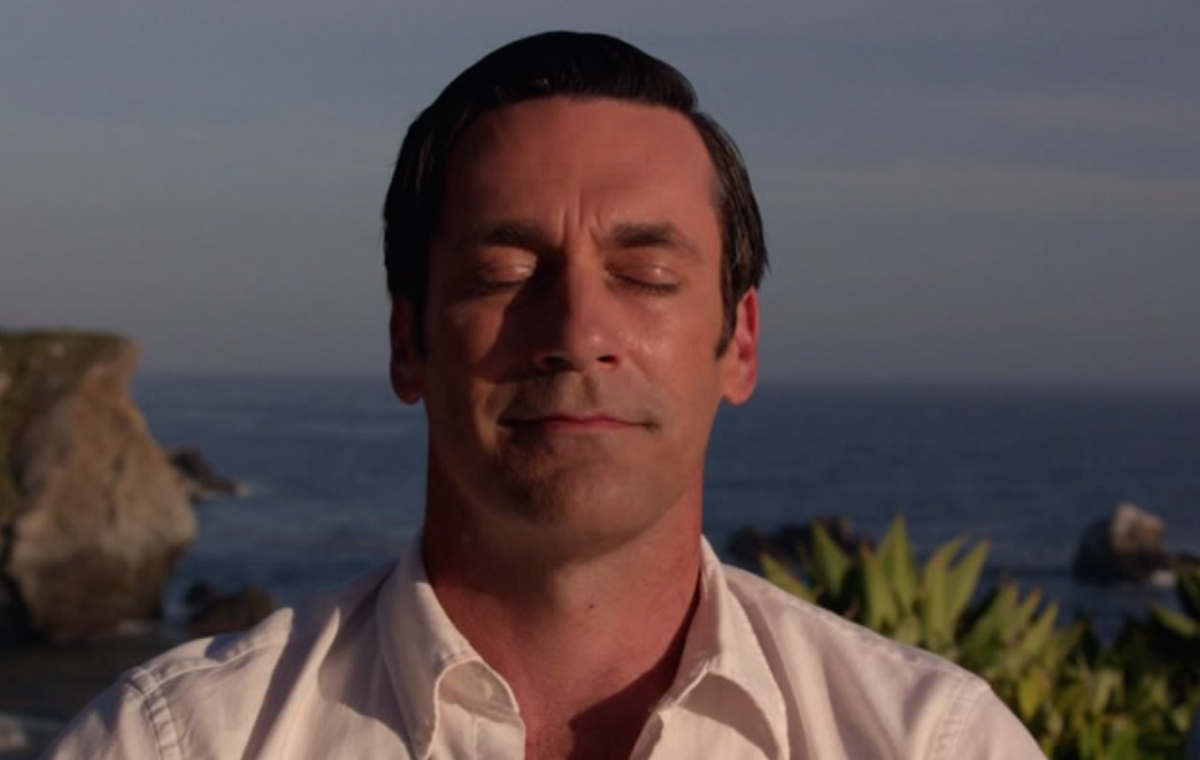 “It’s The Real Thing”: Person-to-Person Connection in the Finale of Mad Men 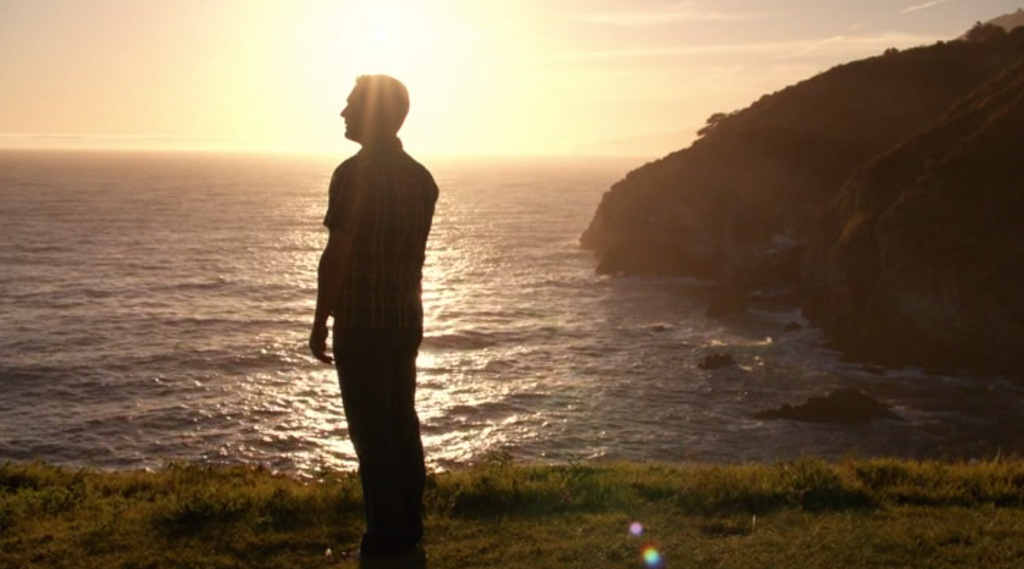 In other words, with an episode of Mad Men.

The show’s final moments have earned comparisons to the ambiguous ending of The Sopranos – a show which Weiner wrote for, and which favored a meandering, novelistic storytelling style that makes it, in many ways, Mad Men’s spiritual predecessor. However, while some suspected that Weiner bought into the same existential despair that permeated The Sopranos, I have long held that, in Mad Men’s final seasons, he had something more redemptive in mind.

And while the finale has generated a wealth of different readings, I believe my suspicions have been confirmed.

At this point, there’s something we need to get out of the way: what literally happens at the end of Mad Men is that Don returns to New York and creates the Coca-Cola ad that closes the series. Weiner has confirmed as much in interviews, and the clues are all there: the costuming choices at the retreat that foreshadow the costumes in the commercial, the “ding” of a meditation bell doubling as the metaphorical light bulb flashing in Don’s head. And while the scene is directed in a way that obfuscates the literalness and purpose of the Coca-Cola ad (more on this later), there should be no doubt that this is what literally, exactly happens. The question we’ll be focusing on here is what it means for the end of Don’s arc and the themes of the show.

There are, broadly speaking, two ways to view the end of Don Draper’s story.

The first is to maintain that, in keeping with the broad strokes of The Sopranos’ worldview, Don has proven himself incapable of change, returning to his old ways by cynically turning a meaningless faux-epiphany into a means of peddling garbage to the masses. Television critic Alan Sepinwall, for example, describes the Coke ad as “slick” and “phony,” expressing his dismay that Don has learned “nothing besides how to write a better tagline.”

The other is that Don’s epiphany is a true moment of personal growth, and that his creation of the Coca-Cola ad, far from undermining his revelation, is somehow good and beautiful – that Don has actually learned something, and that his smile at the end is not one of smirking cynicism but genuine inspiration. 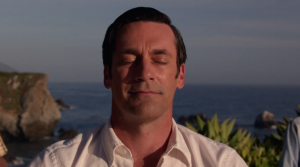 Before we dive in, a first quick note: if Don’s happy ending is in question, what of everyone else? The montage that forms the episode’s penultimate sequence shows where each character has ended up and hints at the next chapter in each of their lives. Joan starts her own company, standing up against the sexism that has so often defined her. Peggy continues the work she loves, but with a boyfriend who both loves and respects her. Pete flies off to Wichita, daughter in his arms, having reconciled with his wife. Even Betty, diagnosed with cancer in the show’s most tangibly unhappy ending, faces her impending death with a surprising, remarkable maturity. While it may be a flimsy first pass at an argument, it’s worth noting that to read Don’s ending as indicative of true growth is consistent with every other character’s arc. Every single character in this ending montage has learned and matured for the better since we met them at the beginning of the decade. Perhaps most importantly, they have all changed, giving the lie to the notion that Mad Men bought into The Sopranos’ weary resignation about man’s capacity for growth. 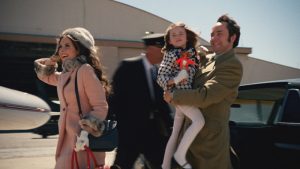 Not pictured: A downer ending.

“Something of Lasting Value”: The Shift in Mad Men’s Depiction of Advertising

In “The Forecast,” the third episode of the final season, Don asks Peggy what her goals are. “To create something of lasting value,” she says, quickly. “In advertising?” Don scoffs. 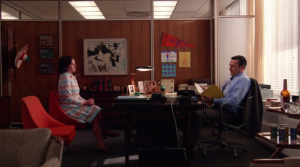 For much of its run time, Mad Men leaned heavily on the idea that advertising was an inherently dishonest business. Don’s pitches were eloquent lies, just like the rest of his life, as he tirelessly scrambled to keep the Draper persona pristine and spotless while inwardly tormented by his own unhappiness. This was the show’s cynical vision of advertising: a system that sells hollow, empty ideas of happiness that are inherently unsatisfying, unable to fill the hole in a person’s soul.

However, in its later seasons, Mad Men has seen a shift, personified primarily by Peggy, towards a more optimistic vision of advertising – a medium, perhaps, to “create something of lasting value.” And while Don scoffs at the notion, the show bears it out. When Don is ousted from the company, he chafes at the lack of work. The truth is that his creative disposition thrives on advertising, and when Ted is considering leaving, it is Don who talks him back from the edge, drawing from his own personal experience. “You don’t have to work for us,” he says. “But you do have to work. You don’t want to see what happens when it’s really gone.”

That work, Mad Men argues, need not be in the service of something false. Contrast the aching falseness of the Kodak pitch in season one’s finale, “The Wheel,” with the genuine emotion of the Burger Chef pitch in season seven’s “Waterloo.” The former so persuasively sold a mirage of happiness that Don himself was moved nearly to tears by his inability to grasp. The latter is described as “beautiful” by an awestruck executive because it is a paean to a universal human truth, the longing for connection that is at the heart of so much in Mad Men. And while Don’s vision of the perfect American family in the Kodak pitch could hardly be further from the truth, the Burger Chef pitch was a product of true collaboration, predicated on a moment of real connection in the moon landing.

“To Buy The World a Home/And Furnish It With Love”: The Shift in Don Draper’s Perception of Love

That longing for connection pervades Don’s actions in “Person to Person,” the show’s aptly named series finale. Don spends the show’s final episodes seeking something transcendent without knowing what it is, racing aimlessly across America in his own existential road trip. The finale opens with a scene that fittingly pays homage to Monte Hellman’s classic Two-Lane Blacktop, itself an examination of the emptiness of the American dream, revolving around its characters’ faltering, uneasy attempts to break out of their self-inflicted isolation. 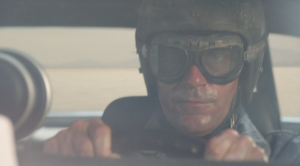 After his implosion at the end of season six and largely successful attempts to pick up the pieces in season seven, Don has come a long way towards becoming a more authentic and functional person, but he is still lacking something, and the finale carefully pinpoints exactly what the problem is: Don still views love as something transactional. In an early scene, he literally pays a woman for sex. Yet even in his interactions with Sally and Betty, his motivations, sincere as they may be, are muddled with a sense of obligation and a desire to be needed, to be irreplaceable because of what he provides. Yet his attempts, via person-to-person phone calls, to reintegrate himself into the lives he has so thoroughly torn himself from are rebuffed. Sally hangs up on him. “I want to keep things as normal as possible,” Betty tells him as she makes preparations before her death, “and you not being here is part of that.”

Crucially, however, his final person-to-person call, with Peggy, is different. She accepts him, without reservation, urging him to “come home.” Don’s calls to Sally and Betty were predicated on him giving them something in exchange for their love. In his conversation with Peggy, Don has nothing to offer; he merely wants to hear the sound of her voice. At this point, Don is unable to accept this freely offered love. However, after his breakthrough, this is the world to which Don returns: one in which there is at least one person who loves him unconditionally.

That breakthrough comes in the form of the series’ last great monologue, delivered by a man named Leonard in a group therapy session:

Leonard then breaks down and begins to sob. Don, moved to tears, stands, walks across the room, kneels, and embraces him. This moment of pure empathy is Don’s true epiphany.

What, then, is the content of that epiphany? Essentially, that, deep down, the desire to be loved is universal, and the unmasking of that desire stirs a desire to give love – and it is the free giving of this love that connects people in a transcendent, spiritual sense.

“I’d Like To Buy The World a Coke/And Keep It Company”: Conclusion

So what’s with the Coca-Cola ad? 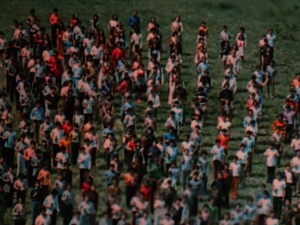 Having wrapped up Don’s story, Weiner pushes the camera slowly towards his face as he meditates. A bell chimes offscreen, and Don smiles, peacefully, before we transition suddenly into the sound of the Coca-Cola singers warbling, “I’d like to buy the world a coke…”

It’s a strange, bold choice that purposefully obfuscates the literalness of the following events, leaving us to connect the dots ourselves. So why cut here?

One of Mad Men’s most frequently used motifs was the push towards the back of Don’s head as he contemplated something, suggesting an inscrutable creative genius to which the audience was not privy. Yet here, in the finale, Weiner pushes towards Don’s face, suggesting a newfound openness – and also suggesting, as we enter the Coca-Cola ad, that we are not only seeing the fruits of Don’s labor, as we have so many times before, but that we are actually seeing Don’s state of mind – and it is a peaceful one, untainted by self-loathing and insecurity. Moreover, we are seeing Don’s flash of creative inspiration, and in this moment, Don is not cynically peddling an idea to the masses below him. The push to Don’s face and the abrupt cut remove any barrier or distance between Don and the ad. This ad is sincere, maybe even cloying. Don himself has bought into it.

As with every other character, the finale both concludes Don’s arc and suggests the next chapter in his life (“A new day. New ideas. A new you,” intones the yoga instructor). Having reached this beautiful, transcendent epiphany about himself and human nature, Don returns to the world where he is creatively fulfilled and loved unconditionally (by at least one person). In sum, the Coca-Cola commercial encapsulates what Don has learned about human connection in a true and lasting ad, and this does not cynically cheapen the epiphany; rather, it is the best way Don possibly could express the epiphany. “It’s the real thing” is a double entendre: universal human connection is the real thing, and the commercial is selling that as much as it’s selling Coca-Cola.

Weiner loosely based the concluding seasons of Mad Men on the structure of Dante’s Divine Comedy (more on that in a previous essay), sending Don through his own inferno and purgatory in order to reach paradise. As bleak as the final season seemed at times, it was, by stripping Don of his earthly trappings, carefully positioning him for a paradisal epiphany – and in this finale, one could say that Don has caught a glimpse of the love that moves the sun and the other stars.