In his fascinating work of collected interviews with Alfred Hitchcock, french filmmaker Francois Truffaut discussed with Hitchcock the possibility of doing a film adaptation of Crime and Punishment. When explaining why he would not, Hitchcock said, “Well, in Dostoyevsky’s novel there are many, many words and all of them have a function…To really convey [the story] in cinematic terms, substituting the language of the camera for the written word, one would have to make a six- to ten-hour film. Otherwise, it wouldn’t be any good.”

There are a few things in Hitchcock’s claim which could be profitably explored, but the phrase “language of the camera” is particularly interesting when considering the subject of narration in film.

The language of the camera, for Hitchcock, is to a film what words are to a novel. Both novels and films are forms of narrative, but how a narrative is brought to the audience is different in each medium. What is told to the audience in novels is shown to the audience in film. Language becomes visual. Because films are primarily a visual medium, it would follow that narration should only be resorted to when an event or idea cannot be properly conveyed through pictures. P.T. Anderson’s magnificent Magnolia comes immediately to mind.

In the classic opening scene of that film, the tone and trajectory of the whole narrative would be significantly altered without the setup the narration provides. In what frame of mind do we approach the subsequent events? Certainly with a more philosophical and lighter heart than we would if the narration were absent. Image after image of death is shown in the introduction, but instead of allowing the audience to dwell solely on the grim nature of what is occurring, the narration encourages the audience to begin the process of understanding both those images and the following events within a context. It tells us to ask ourselves about the nature of what we are about to see. Are the subsequent events mere coincidence, or is there meaning behind them? What is meaning? How do we find it? Like a good teacher, narration allows Anderson to bring a focus to our understanding to the film that would otherwise be opaque.

The narration in Lee Toland Krieger’s recent The Age of Adaline brings no such clarity. In one particular scene, the audience sees Adaline drown when she loses control of her car, which breaks through a barrier, and tumbles down a hill into a river. The scene itself is well-paced and clear. The cinematography is really quite remarkable. Lightning striking the half-submerged car is a particularly moving image. 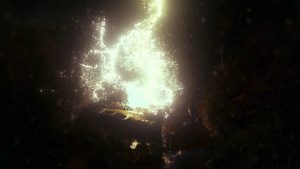 It is obvious without any narration, given the next several images of Adaline’s resurrection, that the lightning strike has somehow revived her and also caused her to never age. Overlaid on top, however, is this:

The immersion in the frigid water caused Adaline’s body to go into an anoxic reflex, instantly stopping her breathing and slowing her heartbeat. Within 2 minutes, Adaline Bowman’s core temperature had dropped to 87 degrees… her heart stopped beating. At 8:55 a bolt of lightning struck the vehicle discharging half a billion volts of electricity and producing 60,000 amperes of current. Its effect was threefold. First, the charge defibrillated Adaline Bowman’s heart. Second, she was jolted out of her anoxic state causing her to draw her first breath in 2 minutes. Third, based on Von Lehman’s principle of electron compression in deoxyribonucleic acid, which will be discovered in the year two thousand thirty-five, Adaline Bowman will henceforth be immune to the ravages of time…she will never age another day.

Such a piece of narration belongs in the novel, a novel which I’m sure many would find intriguing. It is focused, concise, descriptive without overselling itself. But does it add anything that the audience could not understand before? Does it encourage the audience to put itself into a specific frame of mind to watch the subsequent events? Does it do anything that the images have not already accomplished? On the contrary. Not only does this narration not add anything, it detracts our attention away from, and thereby severely weakens, the effectiveness of the image. A narrator relates exactly what is shown on screen, substituting the language of the camera for the language of the novel, and a clunking redundancy results.

I’ll encourage an experiment just to emphasize the point. Watch both films once through all the way. Then, watch through the two scenes mentioned here again with the sound off. Does it change the experience?