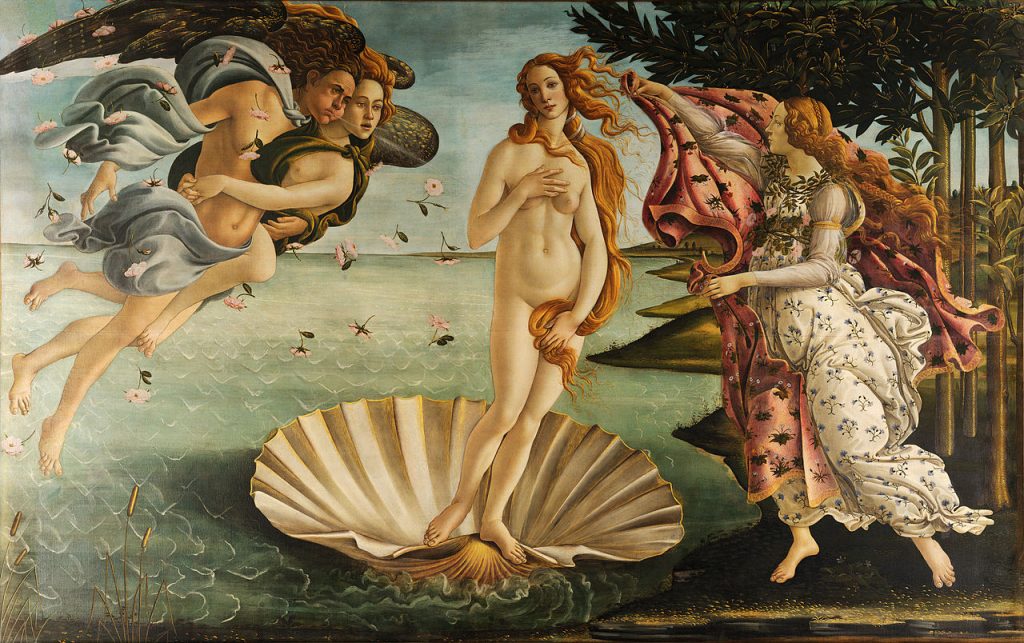 “Would you let your daughter do a nude scene in a movie? Huh?”

Unfortunately, this is about as sophisticated an argument as most Christians are capable of making against nudity in film.

“Christians have allowed nudity in art for hundreds of years. Haven’t you ever been to a museum?”

Similarly, many arguments in favor of allowing nudity in film are so daft as to pretend there’s not much difference between Venus rising from Botticeli’s surf and Phoebe Cates rising from Amy Heckerling’s swimming pool.

Either way, nudity in film is an issue which often prompts Christians on either side of the argument to lapse into historical and philosophical naiveté or else purely sentimental appeals to shame (I often find arguments about pacifism typically run just such a course). To those who oppose nudity in film, those open to it are willing to prostitute their children. To those open to nudity in film, those who oppose it lack a coherent understanding of art and arbitrarily dismiss whatever they don’t like.

I will make no claim to have heard and understood every side of the issue, although I believe most arguments about nudity in film (for and against) fall apart due to poor metaphysics. “In a film, the violence is not real, although nudity is real” runs the rather standard Christian delineation between allowable and unallowable R-rated content. So far as the actors working on sets are concerned, Russell Crow didn’t actually die at the end of Gladiator (to be carried off and eulogized by Ridley Scott), although Kirsten Dunst is actually nude for about half a second on the set of Marie Antoinette (a fact attested to by Coppola’s camera). However, while Dunst was actually nude on the set of Marie Antoinette, we don’t see the actual living Kirsten Dunst actually nude when we watch the film. Rather, we see an image of Dunst nude— an image in exactly the same way that American realist painter Andrew Wyeth created images of Helga Testorf nude, or Titian created images of Mary Magdalene nude by way of a nameless model. A painting of a nude and a statue of a nude and a photograph of a nude and a film of a nude are not variously real; all are, quite simply, genuine and very real images. A photo of a nude is not more real than a painting of a nude. If I must put it vulgarly, a photograph of a nude woman is just as fake as a painting of a nude woman.

Too many Christians have been lulled into an intellectual stupor by the absolute claims of modernist technology which often equate photography with reality. Even in an age of forgeries, there’s no evidence like “photographic evidence.” We never speak of olfactory evidence. The photograph has often been elevated to a position of supreme testimony to truth, and word-of-mouth (upon which rests most of Scripture) is a testimony to nothing but human gullibility.

When Christians claim that a photograph is “real,” what they mean is that photographs tend to have more detail than paintings. At the same time, consider the fact that an horrifically out-of-focus photograph of a nude woman taken at two hundred yards, in the middle of the night, and reduced to the size of a mustard seed is still a photograph… and that the image below is nothing more than a painting (of Toni Morrison, in fact, by the able hand of Robert McCurdy, which stands six feet tall in the National Portrait Gallery). 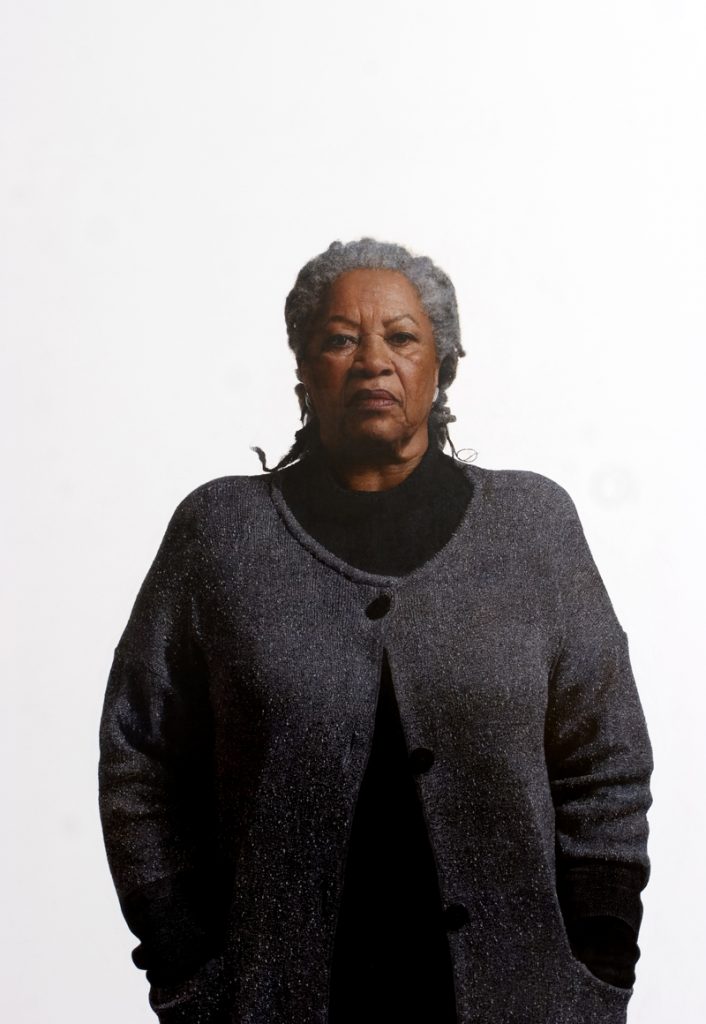 To all those who make as though nudity in film is a scandal, but nudity in painting is not, Mr. McCurdy is looking for a St. Sebastian model and I have given him your name and number.

“Would you let your daughter do a nude scene in a film? Huh?” is not a philosophical argument, but appeals to the heart in the way of a sermon. While it is compelling, it assumes much and proves way too much. The “nude scene” invoked in “Would you let your daughter do a nude scene in a film? Huh?” is generally assumed to be something lascivious, up-close, brightly-lit, scintillatingly posed and angularly photographed. It is not assumed to be, say, someone portraying St. Francis seen from the length of a football field or two, skipping all alone through a meadow of daisies. If I had a son who was Catholic and he and three of his buddies from film school decided to shoot the first three chapters of Chesterton’s biography of that great saint in the aforementioned fashion, I couldn’t bring myself to mind, although it would certainly be “a nude scene.” Granted, there have been exactly zero such “nude scenes” in film over the last fifty years, and 99.99% of all nude bodies in Hollywood films are either scandalous or gratuitous. In the argument over nudity in film, the “allowable nude scene” often involves hypotheticals of a similar magnitude as, say, the search for extraterrestrial intelligence. Does prudence suggest we ought not even waste our time with something so apt to go awry?

However, “Would you let your daughter do a nude scene in a film? Huh?” proves too much in that plenty of Christians who get up in arms about a lady’s nipples tend to not talk much about the latex cat suits Marvel greases Scarlet Johansson into every summer, though I doubt many fathers would let their daughters do that either. I wouldn’t let my daughter don a chainmail bikini and lounge on a leash as Jabba’s sex slave, either. I wouldn’t let my daughter wear blue paint and scales to do an X-Men movie, either. Many Christians tend to write those cat suits and bikinis and blue paint off as “the price of being entertained today,” which has always struck me as more than a little opportunistic, but there are also plenty of Christians who simply aren’t taking their sons to Avengers or X-Men flicks because of those cat suits. If a man is willing to subsidize an X-Men movie which he wouldn’t allow his daughter to act in, his righteous indignation over nudity in films is at very least inconsistent. If refusing to take a boy to an X-Men movie seems prudish, we should at least be willing to admit that what an adult would be willing to let his or her daughter do on film is a profoundly imprecise way of determining what is allowable for other people.

Nudity has the capacity to add something significant to a piece of art, although the question of whether that addition is necessary is altogether different. For my money, a single instance of nudity on film since the end of the Hays Code in 1969 seems genuinely good, and that is the moment Ki reveals her pregnant belly in Children of Men. At the same time, I don’t think the world today would be grasping and flailing in blind aesthetic ignorance had that scene involved a bra. And I would be more than happy to see that one useful instance of nudity gone if it meant all the rest of them were gone, as well, and Hollywood wasn’t much interested in realism or sensuality, but in powerful and sacramental storytelling. The problem is, however, what is and is not “nudity” is hard to say, and with each passing year, “nudity” attains a more and more exacting definition. Before the decade turns, I’d not be surprised to hear the capitalists who edit the Sports Illustrated swimsuit cover had determined that a little cotton scratched under the fingernails was sufficient modesty for a young woman. All this to say, nudity (as we have come to define it) is not necessarily what makes anyone modest or immodest. Anyone who has passed through a supermarket checkout line in the last decade knows a nude image might easily exceed the modesty of a clothed image. Banning nudity in film is not enough, but neither is it absolutely necessary.

It is true that Christians have allowed nudity in art for hundreds and hundreds of years, although they have not done so comfortably. The Church has traditionally empowered censors to condemn religious paintings on the grounds they are too sensual, too erotic. After Michelangelo died, the Church decided to have pants added to a number of nudes on the Sistine Chapel ceiling (employing the artist now known as “Il Braghettone,” or “the breeches painter” to do so). Despite modern fears that any move toward censorship will initiate an inevitable slide toward horrific revocations of any and every freedom, 16th century Italy was not reduced to a burbling cauldron of fascist ugliness after a genius as remarkable as Michelangelo was edited. In the years which directly followed the censoring of Michelangelo, Caravaggio and Rubens and Rembrandt and Bernini began their work. In the years after Madonna wasn’t censored, Miley and Britney began their work.

Of course, the world was far less fragmented in those days and choosing the members of a censorship board was far less contentious. Today, the Motion Picture Association of America is sometimes referred to as a “censorship board” by angry celebrities, however, it ought to be remembered that the MPAA can not actually forbid anything. Submitting a film for an MPAA rating is a purely voluntary act, although most movie houses won’t show films that don’t have ratings simply because filmgoers are generally uneasy about buying tickets to unrated films. When directors complain their films have been “censored” simply because the MPAA wouldn’t assign an R rating unless this or that debauched scene of horror porn was removed, what they’re really complaining about is money, not art. A genuine censorship board would have the ability to strike entire films from any kind of public distribution and make possession of this or that film a crime, and such censorship boards existed during those hundreds of years when Christian art flourished and the Church permitted some nudity in publically exhibited art.

Obviously, a censor board would have to be comprised of the most erudite, educated, virtuous and beautiful and expansive souls our nation has on hand, and those souls would have to be willing to spend their days watching Adam Sandler movies… Or not, I suppose such a board could nix a film after six seconds, if they chose. Until Americans can agree on who should occupy such a censor board, let me say I would be content to have a dozen randomly selected mid-Western great grandmothers take up the work in jury duty shifts.

Hollywood would have to try much, much harder to be reasonable, and that wouldn’t be a bad thing.