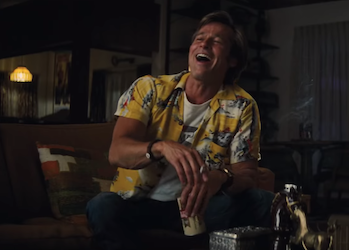 American Christians tend to think of movies in much the same way they think of food. If movies can be reduced to their nutritional value by websites like PluggedIn Online, which tally up curse words and pixels of bare skin like calories and grams of sugar to determine if a movie is “bad for you” or not, movies are little more than a diversion to be consumed thoughtlessly. This scheme fails to offer a truly compelling solution to the vexing question of how a Christian should choose what movies to watch, for most Christians think that candy is “bad for you” and still eat it often. Nutritional facts do not carry moral weight. If a man thinks of movies the way he thinks of food, splurging and watching too many Transformers movies is little different than splurging and eating too many potato chips, which no one treats as a matter of real spiritual import.

This way of thinking is staked in a deep misunderstanding of how humans relate to art in general. (Film is this essay’s chosen subject, but much of what I have to say can be applied with little modification to music, literature, painting, etc.) Food feeds the body, but art feeds the soul, and the logic by which the soul flourishes is quite unlike the logic by which the body flourishes.

Lately, I took my mother to see Once Upon a Time in… Hollywood. I had already seen the film more than once. I had spent much of the preceding month telling her how much I loved it, and why. I had described scenes from the film to her. She had heard me quote lines from the film and she had seen me imitate its characters’ voices and mannerisms. Because I had told her so much about it beforehand, afterwards, she told me that watching the film felt like being introduced to one of my friends.

A person is not simply a set of words and actions, but an endlessly complex web of assumptions, stated and unstated beliefs, values, and intentions. To view a person as a sum total of good deeds and bad deeds would be to deeply misunderstand human nature. Man looketh on the outward appearance, but the Lord looketh on the heart. In the same way, there is far more to the question of a film’s merit than how many curse words it contains. If a Transformers movie were scrubbed of all foul language, it would still be a shallow, sensual spectacle that does nothing to inspire the soul with a longing for goodness. There is also far more to the question of a film’s merit than whether or not it has a “good message.” A Transformers movie will likely parrot a few spurious slogans about self-sacrifice while exhibiting a sincere spirit of self-indulgence. What a person claims to believe is rarely a reliable metric of what he or she actually believes. Ye shall know them by their fruits.

Past a certain point, the analogy breaks down, for every person is a little cosmos, possessing ineffable worth derived from the image of God no matter how much that image is defaced by vice, and the same is simply not true of every film. While we would be rightly appalled to hear the same verdict pronounced over a person, it must be admitted that some films are just worthless trash, undeserving of charitable contemplation.

The better a film is, though, the more like a person it is. Depth of spirit is the thing. If a film is only worth seeing once, it cannot be a very good film, for a great film is not the same on a second viewing. A great film reveals different aspects of itself when you show it to different people, just as people reveal different aspects of themselves in different contexts. A great film is alive, and its depths, like those of a person, can only be plumbed with time, effort, contemplation, repetition. Only a shallow man tries to disclose the entirety of who he is the first time he meets someone, and if he could actually succeed in this endeavor, his success would attest to a remarkably shallow character indeed. People reveal themselves gradually, by insinuation and suggestion, inviting others to make an effort to understand them, but a Transformers movie lays all its cards on the table at once. Getting coffee with a close friend who you have known well for ten years is completely different from getting coffee with an acquaintance you have known for a month.

Time is the only arbiter that distinguishes a deep, lasting friendship from a shallow, transient friendship. Only time reveals a person’s true nature. The same is true of any film worth its salt. A great film – like Once Upon a Time in… Hollywood, or The Tree of Life, or Lawrence of Arabia, or The Man Who Wasn’t There, or 2001: A Space Odyssey, or The Master, or Star Wars – will reveal its depths over years and decades, and in so doing, it will deepen the soul of the viewer who attends to it. I do not think it mere sentimentality to say that my favorite films are the ones (many of which are listed above) that I think of as old friends.

In light of this, how should a Christian choose what movies to watch? Judging whether or not to pursue a friendship is a far weightier proposition than judging whether or not to eat another bag of potato chips. People influence each other in ways both good and bad, and the effects of any given friendship are an irreducibly complex mixture of the two. If only time reveals the true nature of a friendship, humility and patience are indispensable. We should not be hasty to judge, then, but neither can we suspend judgment entirely, for Paul warns us that evil communications corrupt good manners.

In the end, much of this boils down to common sense and attentiveness to oneself. After spending time with a given friend, do you feel more inclined to pray, give alms, go to church, and read the Bible, or do you feel more inclined to indulge your vices and seek shallow pleasures? Make friends with films that sharpen you as iron sharpens iron. Make friends with films that inspire you to draw close to God. Make friendships that last.