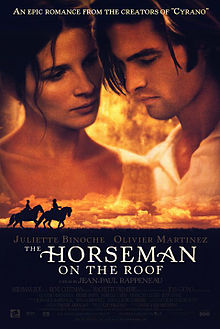 The Horseman on the Roof possesses many of the necessary ingredients of a popular adventure film without being especially popular. It compares not poorly with The English Patient, a much more successful and acclaimed film released in the same year. The Horseman on the Roof, which stars Juliette Binoche and Olivier Martinez, is a period romance of the best kind. Set during the Italian struggle for reunification in the 19th century, it tells the story of a patriotic refugee (Martinez) on the run across France from agents of the Austrian occupation government (the why and the wherefore are not terribly important, and if the post-Napoleonic  political scene isn’t normally your cup of tea, fear not). Hiding out in a not-quite abandoned townhouse, Martinez’s Angelo meets Binoche’s Pauline, a French noblewoman separated from her husband by political circumstances and in need of an escort, for which position Angelo chivalrously volunteers, for reasons with which every male viewer of this film will easily sympathize.

After the two become traveling companions, the tone of the film changes subtly, the focus of the story shifting away from Angelo’s principal duties as a political partisan and toward the growing romantic tension between the two leads. The most conventional devise, the strain between duty and desire, is given a most welcome freshness by the allowance made in the story that the faults of the main characters should not be obscured past the point of credibility, or worse, disguised as virtues.  Angelo is irremediably humorless and Pauline is caprice itself. They are given plenty of space to exasperate each other and us over the course of their travels, and the story becomes that rarest of things: an unblushing melodrama which yet does not presume too much upon the audience’s belief.

The arc of the film is of a less standard type than the devices which compose it. Most of the action sequences, hairbreadth escapes and “preview” moments occupy the first half of Horseman, while the latter sixty or so minutes are more intimately and deliberately paced. The love story between Martinez and Binoche is really the only dramatic fodder left after intermission, and the moral and practical difficulties that confront the two (who, incidentally, are the best looking screen pair of all time, bar none) are of a kind sufficiently grave to keep our interests alive til the credits roll.

Naturally, the film’s French subtitles may in part explain its lack of stateside success. On the other hand, Horseman is a much more palatable and far less eccentric foreign picture than half a dozen others I can name that did manage to recapture their costs and more from American billfolds. I wonder if the relative slowness of the latter acts of the movie did not tell against it. Something about its closing half-hour, not to mention the troubling ambiguity of its conclusion, while not dramatically crippling, do certainly divest it of the “big screen” qualities advertised by its opening scenes and accompanying trailer.

But no matter. The Horseman on the Roof remains among the best romantic dramas of the last twenty-five years. This film deserves a second viewing-and rewards it.

What is Comic Acting? Part I