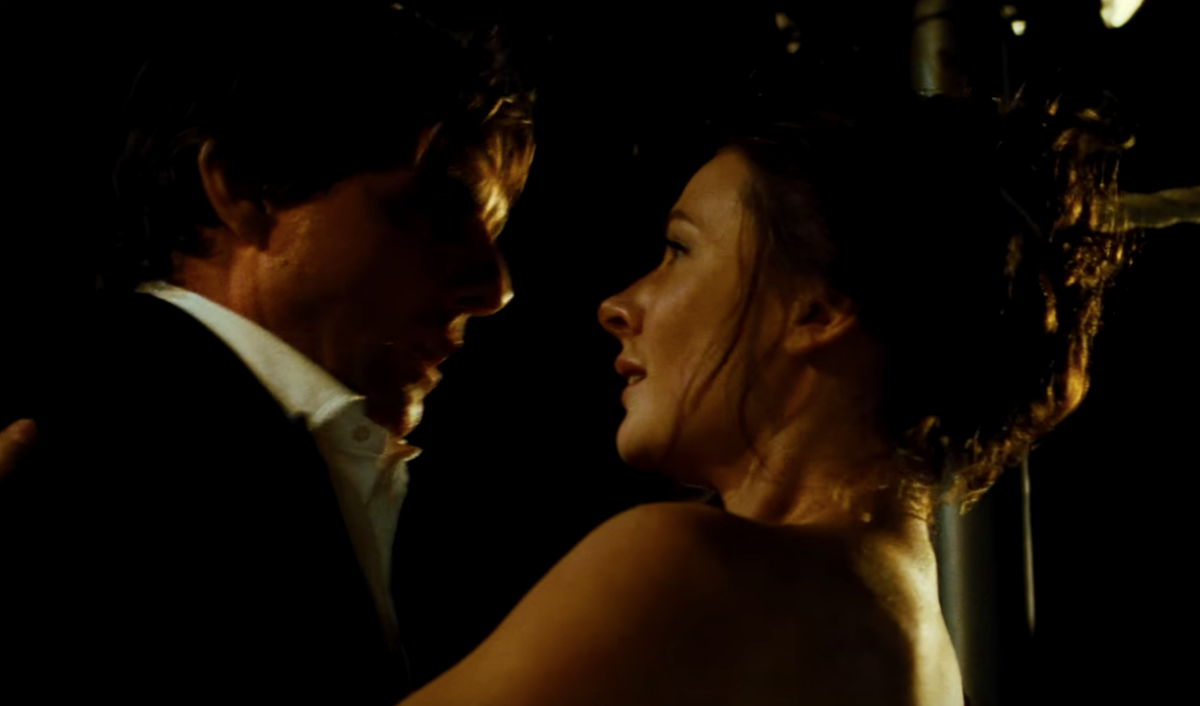 Late in Rogue Nation, the fifth Mission: Impossible film, Ilsa Faust (Rebecca Ferguson), an MI6 agent embedded undercover in the nefarious Syndicate, returns to Atlee (Simon McBurney), her superior, and asks out. To preserve her cover, she would have to kill Ethan Hunt (Tom Cruise), the man she loves. “He’s our ally,” she pleads. Atlee replies, “There are no allies in statecraft, Ilsa. Only common interests.” Those who live and work in the world of espionage are often denied the luxury of human friendships, though big-budget movies in the James Bond tradition tend to gloss over the loneliness this entails, leaving it to more somber fare like The Americans or Tinker Tailor Soldier Spy.

2015 saw the release of five major studio movies centering on spies. I have not seen Paul Feig’s Spy, but I have written at length about my admiration for Kingsman: The Secret Service’s scathing send-up of James Bond films, and I also reviewed that year’s subpar Bond entry, Spectre. Yet as far as I am concerned, the most lastingly winsome of the bunch have proven to be Mission: Impossible – Rogue Nation and The Man From U.N.C.L.E., which came out within a month of each other that summer. Though they are markedly different in almost every respect, the enduring appeal of both films springs from the same surprising source: a dramatic focus on the relationships between individual persons rather than sweeping geopolitics or doomsday plots. As a physical, sensual being, man is inclined to feel the importance of the visceral and immediate far more keenly than that of the abstract and distant, and it is for this reason that movies about imagined apocalypses play to the emotions as ineffectively as sermons on the real apocalypse. The mood of a movie theater in the summer months is not given to contemplation; it is concerned primarily with the visceral pleasure of watching bodies in motion. In such a mood, even though we know all life is sacred, it means little for a large purple-skinned fellow in an Avengers movie to wipe half the universe from existence with a magic glove. On the other hand, in such a mood, though we know various safety measures are in place offscreen, it means much for Tom Cruise to cling to the side of a moving airplane. I rarely find myself emotionally compelled by the consideration, in the abstract, of mankind as a species; I am far more likely to be touched by the consideration of particular men, women, and children. This may indicate a limitation on my part, but the latest Terrence Malick film is likely better suited to challenge such a prejudice than the latest Tom Cruise vehicle.

All this is to say that, in my estimation, it is to The Man From U.N.C.L.E.’s credit that the fate of a nuclear bomb proves to be of merely secondary importance to the dramatic question of whether three people will learn to like each other, and it is to Mission: Impossible – Rogue Nation’s credit that, in the end, the plot hinges not on the threat of world destruction but on whether Ethan Hunt will be able to save the soul of the woman he loves.

The Man From U.N.C.L.E. wastes no time in signaling its blithe indifference to the real-life complexities of its Cold War setting. Its opening credits transition from grainy archival footage to a Technicolor movie fantasy while Roberta Flack sings the refrain, “Try to make it real, compared to what?” Indeed, all the film’s most horrific images are presented in black and white, while a maniacal torturer promises to take photographs of his newest victim in Kodachrome: “The colors are so real you can almost taste them.” In the end, Napoleon Solo (Henry Cavill), one of the most endearingly smug secret agents ever to grace the silver screen, practically winks at the camera, “How’s that for entertainment?”

Though U.N.C.L.E.’s glibness may initially register as mere flippancy, it frees the film from the self-seriousness in which too many blockbusters stew that it may focus its attentions elsewhere. Indeed, U.N.C.L.E. is little more or less than a relationship comedy in spy thriller’s clothing, cloaking the sincerity of its emotions in farce, defusing spy tension with sex and sexual tension with spying. All the genre’s usual trappings exist to develop the relationships between Solo, Illya Kuryakin (Armie Hammer), and Gaby Teller (Alicia Vikander). Advancement of character supersedes advancement of plot, and the film signals its priorities on multiple occasions, relegating what would typically be front and center – a boat chase, a gruesome death – to the background. A scene in which Solo and Kuryakin snoop around an evil lair climaxes not in the discovery of any clue but in Solo’s choice to save Kuryakin’s life instead of leaving him to die. A car and motorcycle chase, in which the goal is ostensibly to retrieve a warhead from villains, ends up being more about rescuing Gaby. In the film’s final passages, international concerns literally go up in flames, eclipsed by our heroes’ fondness for each other. Hollywood is eager to make a franchise of anything nowadays, but in a bitter injustice, there have been no sequels to The Man From U.N.C.L.E., which is one of the very best series starters in recent memory because it is almost entirely dedicated to creating a cast of characters with whom one might wish to spend more time.

Human interest is rarely invoked to account for the longevity of the Mission: Impossible series, which will see the release of its sixth installment this weekend. J.J. Abrams’ third installment attempted to give Cruise’s super spy alter ego a wife and a human dimension, but Brad Bird’s subsequent Ghost Protocol hastily brushed this under the rug, as if to conclude that Ethan Hunt, action hero, is better off unencumbered by the concerns of normal people. The film’s final image sees Hunt vanishing into a cloud while being briefed on his next mission, essentially severed from the land of the living.

Rogue Nation is as terrific an action film as its predecessor, which is the main thing one expects from a Mission: Impossible movie, but it also serves as a gratifying course correct for its hero, picking up right where Ghost Protocol left off, with the very same visual cue. Hunt, trapped in a glass box, is engulfed in a cloud before being imprisoned by the Syndicate, an organization of operatives presumed dead – detached, that is, from the real world. Their leader, Solomon Lane (Sean Harris), is disillusioned with the government he used to serve – a dark mirror of Ethan, who finds himself disavowed by his own government in every other Mission: Impossible movie, if not more frequently, and of Ilsa, whose treatment at the hands of the selfish Atlee leaves her similarly disenchanted. “Lane, Atlee, your government, my government, they’re all the same,” she laments. “They don’t care if you live or die.” However, Rogue Nation reverses Ethan’s lonely fate from the ending of Ghost Protocol by grounding him in real relationships with his teammates. “I can’t protect you,” he tells Benji (Simon Pegg). “That’s why I need you to leave.” This is the same logic that prompted Ethan to separate from his wife, but Benji refuses to play along: “I am a field agent. I know the risks. More than that, I am your friend.” Ethan’s friendship with Benji (and with Ving Rhames’ Luther Stickell, and with Jeremy Renner’s William Brandt) saves him from becoming a lonely, vindictive soul like Lane, and they assist him in his attempts to save Ilsa from the same fate.

Love stories in blockbusters are rarely convincing because blockbusters are rarely interested in developing characters into people with sufficient depth of feeling that they might fall in love. Characters in films of this kind often exist as avatars to move from point A to point B, often at great speed, withstanding explosions and shooting, punching, or otherwise fighting each other. At best, they might engage in some affable banter along the way. What is peculiarly ingenious about Rogue Nation is that it sublimates its love story into the shooting, punching, and fighting. The love between Ethan Hunt and Ilsa Faust is never verbalized or expressed by physical contact more intimate than a brief embrace. Their romance finds its only consummation in an exchange of loaded glances before a gunfight. Rogue Nation is Wong Kar-Wai’s In The Mood For Love as a spy film.

If there’s something a tad irresponsible about how lightly the heroes of U.N.C.L.E. throw away their commitment to their countries, perhaps Rogue Nation makes for a more robust counterpart. Though Hunt often disobeys the orders of his superiors, he does not become disenfranchised as Lane and Ilsa do, and though modernity tends to favor the individual over the institution, Ethan’s fierce loyalty to his friends and to Ilsa does not supersede his loyalty to his country, as it does in U.N.C.L.E. “You blame the system for what you are, instead of yourself,” he accuses Lane, refusing to go along with his jaundiced agenda. Yet the more poignant test comes from Ilsa, who presents Ethan with the opportunity to run away together. That Ilsa shares the name of Ingrid Bergman’s character from Casablanca is no coincidence, nor is the fact that a good chunk of the action takes place in that Moroccan city – and Hunt, like Bogart before him, wistfully chooses duty over love, remaining loyal to the system that created him even though it has cast him aside, sacrificing a chance at personal happiness for the greater good. Though the world of spies in which Hunt lives rarely leaves room for human attachment, Rogue Nation, like The Man From U.N.C.L.E., turns out to be an ode to friendships over espionage. Both films insist, contra Atlee, that those in statecraft must have allies, not merely common interests. In the end, it is Lane who vanishes into the cloud, bereft of friends and allies, while Hunt is reunited with his.