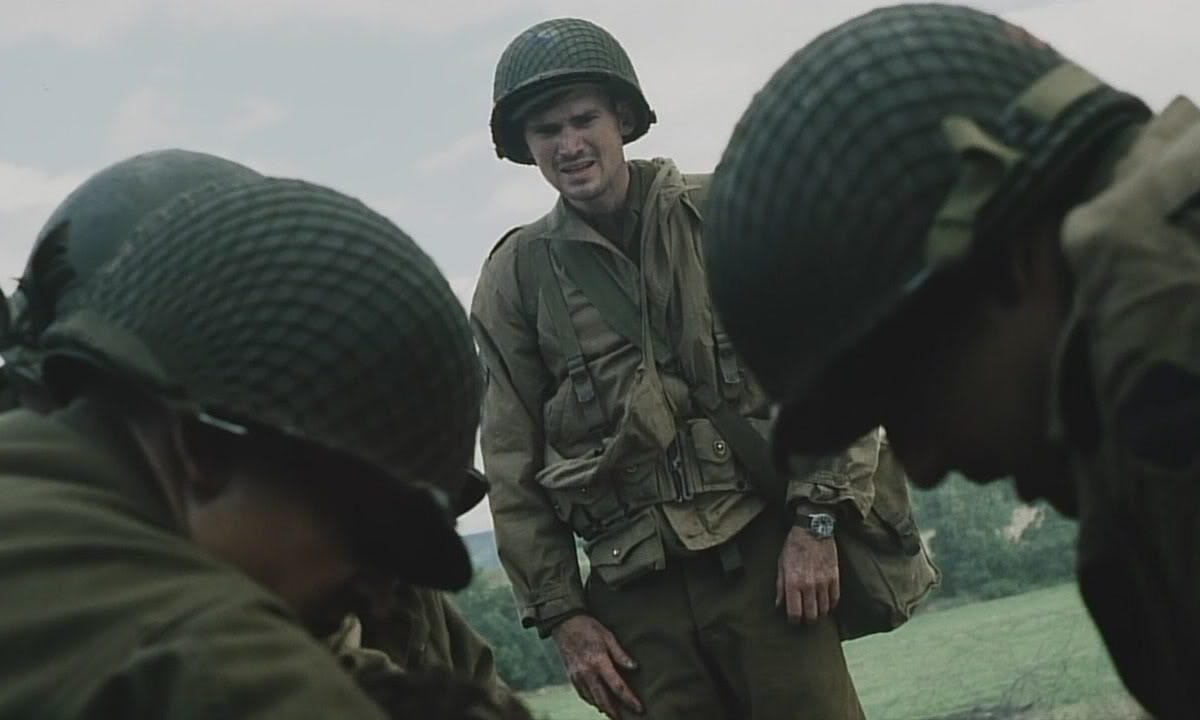 Perhaps the most agonizing scene in Saving Private Ryan is Corporal Upham’s (Jeremy Davies) refusal or inability to save Private Mellish (Adam Goldberg) from the soldier who kills him. While perfectly able to do so, Upham slumps in the middle of the stairs, weeping, as he hears his friend calling for help. Although painful, I’ve come to see that Upham’s inaction isn’t that surprising. There’s no way to tell what’s going through his head at that moment, but leading up to it, the film portrays how unsuited he is to take action when necessary.

“Courage is almost a contradiction in terms. It means a strong desire to live taking the form of a readiness to die… A soldier surrounded by enemies, if he is to cut his way out, needs to combine a strong desire for living with a strange carelessness about dying. He must not merely cling to life, for then he will be a coward, and will not escape. He must not merely wait for death, for then he will be a suicide, and will not escape. He must seek his life in a spirit of furious indifference to it; he must desire life like water and yet drink death like wine.”

According to Chesterton, courage can be embodied, but it can never be understood on an intellectual level, which “tangles the definitions of merely rational sages.” Upham is Chesterton’s rational sage. He’s a translator who Captain Miller (Tom Hanks) recruits to aid his Rangers as they search for Private Ryan (Matt Damon). There’s nothing inherently cowardly about Upham’s role, but Upham’s introduction makes clear that he’s most comfortable dealing with logic, order, and systems. Such are the pillars of every army, but by Chesterton’s definition, courage demands giving up those organizing principles and embracing uncertainty.

As the Rangers begin their journey, Upham tries to bond with the rest of the group. For the most part, they all rebuff his efforts, save their medic, Corporal Wade (Giovanni Ribisi), who asks Upham about the book he’s writing. Upham explains, “It’s supposed to be about the bonds of brotherhood that develop between soldiers during war.” The rest of the soldiers laugh and Private Caparzo (Vin Diesel) sneers at Upham, “What do you know about brotherhood?”

Apparently, not much. This seemingly innocent comment reveals a lot about Upham’s perspective. He wants to write about “the bonds that develop between soldiers” as if he’s an observer removed from the group, recording his specimens’ interactions. By not tethering himself to these men, he’s inadvertently preparing himself to abandon them in their hour of need.

Furthermore, Upham espouses a romanticized view of war, which does little to prepare him for war’s realities and to take action. Having never been in combat, he doesn’t understand that war does more to tear people apart than bond them. As the Rangers take a break in the church, he expresses more of this romanticism to Captain Miller by quoting Emerson:

“War educates the senses, calls into action the will, perfects the physical constitution, brings men into such swift and close collision in critical moments that man measures man.”

This line serves two purposes. It shows Upham’s misplaced belief in warfare’s ability to perfect men (rather than degrade them as we’ve seen). Additionally, the Rangers under Miller’s command also have a running bet as to where Miller is from and what he did before the war, and the conversation segues to that topic.

Captain Miller: What’s the pool up to?

Captain Miller: Well, when it gets up to five hundred, I’ll give you the answers and we’ll split the money. How about that?

Corporal Upham: Well, if that’s the way you feel sir, I feel it’s my duty and your command to suggest that we wait until it gets up to a thousand, sir.

Captain Miller: What if we don’t live that long?

This interaction is so important for understanding why Upham is unsuited for courageous action. In this case, $1,000 is the ideal sum. Even Miller would prefer that amount, but he doesn’t let his preference for the ideal blind him to the lower sum of $500. Upham, however, not only prefers the ideal but lets it blind him to the exclusion of everything else.

This idolization of the ideal is the antithesis of courage. According to Chesterton, courage means first accepting that things aren’t ideal. For example, the soldier surrounded by enemies must accept several less than ideal realities. Ideally, he wouldn’t be surrounded by enemies. Ideally, he would have a weapon or method for defeating them. Ideally, he could get out in one piece. Yet, those ideal situations will never be realized. It’s only when the soldier (or anyone for that matter) accepts less than ideal situations that they’re able to take any sort of productive action. Upham however, idolizes ideal scenarios so intensely that he freezes when he’s in any sort of less than ideal situation.

One example of Upham freezing in bad situations is when the Rangers attack the radar tower and Wade gets shot. Upham says to Wade, “Tell us how to fix you.” Upham wants a perfect solution, but knowing he can’t have that causes him to distance himself from the group (notice he’s standing away from and over the group rather than kneeling with them in the dirt) as they comfort Wade in his passing.

In Upham’s defense, it’s completely understandable why he removes himself from bad situations. Not only does the violence disturb him, no one ever prepared him to take action. He only fires his weapon at basic training, he doesn’t storm Normandy, and Miller sidelines him when they attack the radio tower. At this point, it’s clearly in Upham’s nature to not take action, but it becomes clear that the Rangers have also nurtured this tendency in him. Not only is Upham training himself to not take action, everyone else is as well. This isn’t a defense of Upham’s cowardice, but an analysis of all the forces preventing him from saving Mellish in the final act.

After Wade’s passing, the men find the German soldier (named Steamboat Willy in the script) who they believe shot Wade. In their anger, the men want to kill him even after Willy surrenders, but Upham defends him. It’s no surprise that Upham does this, given his trust in rules and rationale. Again, Upham does nothing wrong, and I’d argue that it’s right to defend Willy. At this point, it’s simply important to notice Upham’s appeal to rationale above everything else. After the ordeal at the tower, the Rangers find Ryan. As they prepare for their ambush on the Germans, Sergeant Horvath (Tom Sizemore) becomes a shining example of Chesterton’s hero.

“Part of me thinks the kid [Private Ryan] is right… He wants to stay here, fine. Let’s leave him and go home.”

Chesterton defines courage as a tightrope between where a man is and where he wants to go. This tightrope hangs above two abysses; suicide on one side and cowardice on the other. Horvath’s tempted to fall into one of them; stay and wait to die with Ryan as a suicide, or leave Ryan and go home as a coward. Faced with these two options, what motivates Horvath to move forward on to that tightrope of courage instead of sinking into despair as Upham does? Horvath’s following line sheds more light on the answer.

“But then another part of me thinks, what if by some miracle we stay, then actually make it out of here. Someday we might look back on this and decide that saving Private Ryan was the one decent thing we were able to pull out of this whole god awful mess.”

Hope prompts Horvath to move forward, and it prompts every hero to step onto that tightrope. Although Chesterton doesn’t explicitly say that in his definition, Josef Pieper’s work “On Hope” articulates how hope encourages people onward.

Although a negative outcome is more than likely, Horvath is able to resist falling into despair and presumption because his moral imagination creates a future in which all of their pain is redeemed.

Upham, on the other hand, is both despairing and presumptuous. He despairs because he realizes people don’t adhere to his worldview. He believes people should act according to order and fairness, but others don’t. For example, Willy, the German soldier Upham shows mercy to, doesn’t reciprocate that mercy, and ends up killing both Mellish and Miller. Having seen his worldview destroyed, Upham presumes there is no other course of action available to him and stops participating as a result.

Saving Private Ryan is often critiqued for its ludicrous concept. No single soldier is worth the lives of several other men just because he loses family members. The film itself speaks to this when Private Jackson (Barry Pepper) calls it a serious misallocation of U.S. army assets and when Private Reiben (Edward Burns) gripes about how ridiculous it all seems.

Yet much like courage, the narrative doesn’t need to make sense in order to exist. In fact, its appeal to pathos rather than logos gives viewers deeper insight into longing, suffering, and connection than they would have been able to experience otherwise. One of Wade’s monologues serves as an example of the power of pathos. As a medic, he steps into suffering to heal men’s physical wounds, and he steps into emotional turmoil as well. As the men chat in the church about their lives back home, Wade opens up about his mom and his regret over ignoring her when she would come home late at night from her nursing shift.

Mellish: Who, your mom?

Wade: Yeah. She’d stand in the doorway looking at me… and I’d just keep my eyes shut. And I knew she just wanted to find out about my day – that she came home early… just to talk to me. And I still wouldn’t move… I’d still pretend to just be asleep. I don’t know why I did that.

By sharing his grief, Wade is able to develop the bonds with the Rangers that Upham wants to write about. It serves as a beautiful illustration of how bonds are formed, and helps the audience empathize with the movie. We too have felt the longing for just a few more minutes with someone we’ve lost, and recalling our own longing gives us a small, yet visceral insight into the longing Mrs. Ryan must feel for her dead sons. Suddenly the mission, while still not making logical sense, makes far more emotional sense. It’s this same emotional aspect and longing to see their loved ones that encourages Miller and Horvath when their hope and courage flags.

To say that Miller, Horvath, and Wade have more courage and hope than Upham is probably true, yet trying to measure how much virtue is required to become a hero is the wrong way to go about trying to become one. Wade’s moment also shows us that heroes possess a fundamental view of life that begets courage, hope, and other heroic virtues.

Cowards like Upham live for the sake of living and desperately cling to their finite lives. Being too afraid to die, they’re too afraid to live, and as a result they shrink from any action that might put them in jeopardy.

Heroes like Wade don’t cling to their lives. They don’t try to hoard their heartbeats because they know life is meant to be spent. When facing life and death situations, they take action. They’re fearless of the outcome because their goal is never to escape death, but to give away as much of themselves as possible before they enter eternity.