If you grew up in a Christian family in the last two decades, you probably have listened to Paul McCusker’s work. McCusker is the mind behind many episodes of the radio drama Adventures in Odyssey and several of Focus on the Family’s Radio Theatre programs. Beyond the Mask was McCusker’s first screenplay. After he wrote the first draft, Stephen Kendrick also took a turn at the script. 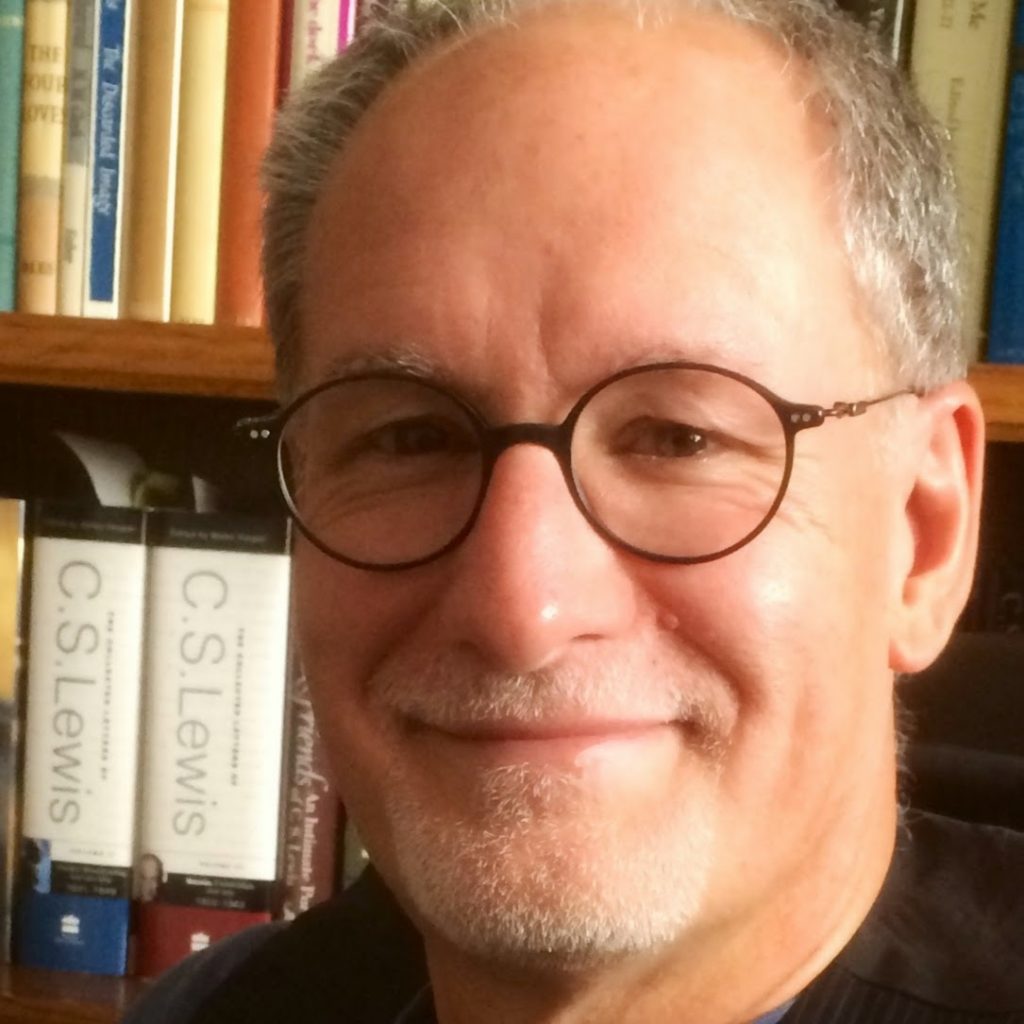 I recently spoke with McCusker to learn more about his experience with screenwriting and how Christian audiences are often responsible for the kinds of Christian art that get made.

When you were first approached by the Burns brothers to work on Beyond the Mask, you were a little hesitant. What changed your mind?

For one, the story idea. It was completely unexpected. I thought that I was being approached to do another Fireproof, and I was hesitant to take that on because so many [like that] were already being produced. When they told me it was set in 1775 and involves this mercenary for the East India Company, I was genuinely surprised. I love that history and that time period in particular.

The second part was that I realized the Burns brothers were not wannabes. I often get contacted by guys who want to make movies, but they have absolutely no idea how to do it. With the [Burns brothers’] expertise, experience, and their idea, I decided I’d really like to be a part of it.

You have worked a lot in radio drama, and screenwriting is a completely different format. What were some the challenges and benefits of writing a screenplay?

There were times when I think early drafts of the script were overwritten, because you have to explain everything in a radio drama. The other thing, too, was that even though we wanted this to be a family-friendly film, I did have to be careful not to make the characters sound too much like they were in an Adventures in Odyssey episode.

What I loved about it is the difference in the discipline. Most of what I tend to write—audio dramas, novels, things like that—I have to spell everything out. I really enjoyed the challenge, and in some respects, the freedom, of writing for the visual medium. I have to admit that I felt sorry for the guys [on the set] at times when you realize that what for me was one line in the script might have taken them the better part of a day to accomplish.

As you wrote the script, practically, how did you work out the conflict of writing a fun adventure story and writing a story with faith elements added in?

Our first job was to outline the story. We worked through the entire thing, from start to finish. Chad and Aaron Burns had certain action pieces they wanted in the story. All the time I was trying figure out character motivation. Why is our hero doing what he’s doing? It’s important because the spiritual journey has to come out of the character’s motivation.

We tried to build into the structure all the things Will Reynolds counted on…and take them away. He was trying to redeem himself for the sake of Charlotte [his love interest]. And his weapon was the information that would expose Charles Kemp and the East India Company. We took them away. Voices into his life – Charlotte’s, for example – tried to show him the futility of his efforts. They were getting in the way of the truth: that redemption comes only through Jesus Christ. But to show that while keeping the action moving forward was difficult.

Right. One thematic moment that stood out to me was when Will was having a flashback to when he was still working for the East India Company. He tries to stop someone who’s beating a person, and then sees it’s himself.

Right. [It shows] that he’s moving into a kind of detachment from himself in a good way, where he’s now recognizing himself as he really is.

[It also shows] a lot of backstory that did not make it into the final film. In our own private backstory, Will was an orphan that Charles had taken in and turned into a mercenary machine for the East India Company. Will was reaching a point where he wanted to stop, he wanted to settle down and be a gentleman and wanted to join Charles and all the other bigwigs (no pun intended).

If this had been a novel, I would have unpacked all of that.

When the film came out, it gained some traction among the Christian community. However, even in the Christian market, there’s this divide between filmgoers who want an obvious faith message and those who push back and say that any faith message is corny. Why do you think there is that huge divide?

When you think about how any thing gets made, you have to think about who gives to the project, whether donors or investors, and what their expectations are.

In the evangelical realm, the expectations can be very high that a film is meant to have a spiritual takeaway value. And usually that involves a conversion—preaching and proclaiming salvation through Christ—or affirming the existing faith. Then you have the other side of the community that says wholesome, Christian worldview entertainment has its place even if it’s not being overt or obvious in its messaging.

You can see this difference between a movie like Fireproof and Mom’s Night Out. You have got study books and a whole pro-marriage lesson in Fireproof over and against a film that is primarily about entertainment and giving Christians the opportunity to laugh and to enjoy themselves (Mom’s Night Out).

Do you think that there is a place for Christian audiences to respond to Christian-made films that have a Christian worldview, but also appeal to non-Christians? Like say, Saving Mr. Banks?

I think that Saving Mr. Banks, for example, was about the human condition. But it didn’t have the sort of takeaway message that evangelicals often expect from evangelical films. Evangelicals go to movies like that and appreciate them, but they know it’s a Hollywood film, so they don’t have high expectations that the faith aspect will be done right. Whereas, when evangelicals go to so-called Christian films, there’s a whole different expectation. They expect the filmmakers to know the Christian community well enough to show and say “the right things.”

There’s a phrase we used with Focus on the Family Radio Theatre. “Secular-worthy stories from a Christian worldview.” By “secular-worthy,” we meant a standard of storytelling and production that would be acceptable to a secular audience. That also meant we had to express our themes or messages through “exploration” rather than “proclamation.” The one versus the other makes a big difference in how stories are told.

The evangelical tends to want art and movies to lean towards the “proclamation” side, proclaiming the Gospel. Bring characters to the Billy Graham moment, the conversion. Whereas if you look at most Hollywood films, even though they can be agenda-driven, they tend to be an exploration of an idea rather than a proclamation. If there is a foregone conclusion about what will happen, Hollywood usually hides it pretty well. Whereas the Evangelical community wants it spelled out. That’s why it’s hard for Christian filmmakers to make a secular-worthy film that will also be acceptable to the Christian community. It’s tough to do both at the same time.

Do you think that is a worthy goal, to create films that will meet those two expectations? Would that make for better art?

It’s a worthy goal. But I think we will always have films in the evangelical community that will “preach to the choir” in the way they want. There’s nothing wrong with preaching to the choir. But I’m concerned that filmmakers who do that all the time won’t learn how to make secular-worthy films. We have to learn the craft. We need to create films that speak beyond the evangelical market. Otherwise, we’ll never get to where we need to be as artists and storytellers and communicators. .

It’s like your question about my writing audio drama versus film. They’re two different approaches, two different styles of writing. I wasn’t sure what kind of screenwriter I’d be because I was so used to working in the audio drama realm. In the same way, if you’re so used to writing for the Christian market, then you’re going to have to work that much harder to make it worthy of the secular market. You have to find new ways of expressing the ideas we take for granted – not only with words, but visually.

That’s a good way of putting it.

There were points during Beyond the Mask when the Burns boys really struggled over what kind of movie they wanted to make. Are we trying to make a film for the secular market, and will anyone go to it? And what about people who were expecting a a more overt Christian effort? Will Christians go out to see an action adventure film?

Many of our readers are younger people who either love movies or want to make them. What kind of advice would you give to aspiring writers and filmmakers?

If you’re trying to be a writer, then write a lot. And read a lot. If you want to do novels, read lots and lots of novels. Not necessarily just literature, but read a lot to understand how writers accomplish their craft.

It’s the same thing for filmmakers. If you aspire to write screenplays, I’m not sure that reading screenplays as helpful as always watching them. Actually, I would encourage people to sit with a screenplay and watch the film. Then you can see what’s on the page and how you need to write what’s on the page, and then how it is brought to the screen.

Learning the craft really well is what you want to do. And holding onto your Christian worldview while also creating something that is secular-worthy is a really great aspiration. Too often you compromise one or the other. When you do that, more often than not, you wind up not pleasing either audience.