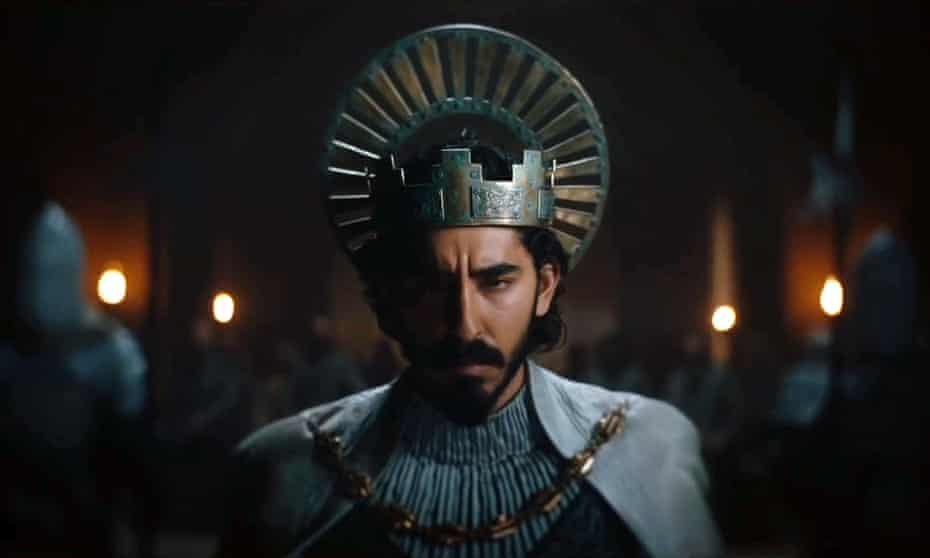 In the church calendar, the merriment of Christmas is swiftly followed by two more sober feasts: St. Stephen on December 26th, named for the first Christian martyr, and Holy Innocents on December 28th, commemorating the children of Bethlehem who were killed by Herod. After celebrating the birth of the Christ child, we turn around and remember death. This may seem counterintuitive, but it is apt. Not only did Christ come into the world in order that He might die, Christ requires that we share in His death. He is “born that man no more may die,” and yet, if we are to rise with Him, we must first die with Him. The Incarnation, then, gives the lie to our belief that we can order our own lives however we see fit. For Herod, Christmas spelled the end of the world.

The Green Knight would seem a strange Christmas movie if not for this theological backdrop. On Christmas Day in medieval Britain, the titular Green Knight (Ralph Ineson) comes before King Arthur’s Round Table proposing a “friendly Christmas game”: one of the knights may strike him, on the condition that he will return the same blow “one year and Yuletide hence.” Young Gawain (Dev Patel), eager to prove himself a knight, chops off the Green Knight’s head. Then, Headless Horseman-like, the Green Knight retrieves it and rides away laughing, leaving Gawain with the expectation that he will lose his own head come next Christmas.

The film begins with a shot of Gawain presiding in Arthur’s empty, darkened throne room, scepter and Sovereign’s Orb in hand, while a crown descends to him from above and a voice introduces his legendary tale. When Gawain is crowned, his head bursts into flame, and so, in the visual poetry of The Green Knight, fire is already linked with greatness: with power, dominion, renown, reputation. To be great is to rule and to be the subject of songs. This opening shot is Gawain’s dream of greatness. In actuality, though, Gawain is sleeping away Christmas morning in a brothel. His lover, Essel (Alicia Vikander), awakens him by dumping a bucket of water on his head and proclaiming that “Christ is born,” rather literally extinguishing his vainglorious dream. If there is any holiday that should put out Gawain’s fiery notions of greatness, it is Christmas, when the God of the universe lowered Himself to become a helpless infant, born not in a palace with great fanfare but in a humble, anonymous stable. “Now it is high time to awake out of sleep,” as my Anglican church recites during Advent, and although Gawain would rather go back to bed, Essel demands that he go to Mass. “I’m not ready yet,” he groans – a line that will echo through the rest of the film.

Essel, who wears jingle bells on her cloak, is one of two characters strongly associated with Christmas. The other is the Green Knight himself, who comes to King Arthur’s court holding a sprig of holly aloft. Like Essel, the Green Knight calls earthly ideas of greatness into question. The opening line of his message, addressing Arthur as the “Greatest of Kings,” seems slightly mocking, slightly ironic, when read on the birthday of the King of Kings. When he appears, interrupting Arthur’s boastful speech about how he and his legendary knights have conquered Britain and “shaped” the land to their liking, the torches in the throne room are magically snuffed out, repeating the elemental symbolism of Essel dousing Gawain’s fiery head. Essel and the Green Knight are further linked by a hallucinatory vision at the film’s midpoint, which sees Essel turning into the Green Knight, who then turns into a tree, the icon of the crucifixion. These two characters force Gawain to reckon not only with Christ’s humble birth, but also with His submission to death.

The elemental symbolism comes full circle near the end of the film, when Gawain comes to the Green Chapel the following Christmas to present his neck to the Green Knight’s axe. While the Green Knight slumbers peacefully on Christmas Eve, he is positively dripping with water, which runs down the Chapel steps. Gawain, who spent last Christmas Eve in a stupor of carnal pleasure and vain dreams, spends this Christmas Eve keeping vigil at the foot of the stairs, pondering his own death and, we must imagine, the state of his soul. Like the preeminent Christmas movie, It’s a Wonderful Life, which was itself surely influenced by Dickens’ A Christmas Carol, the last act of The Green Knight hinges on a vision – a vision of a life that could have been, or could come to pass. On Christmas, Gawain is given two choices: he can be Herod, who tries to secure his kingdom and his life by clinging to power that he must inevitably lose, or he can be John the Baptist, who confesses, “He must increase, but I must decrease,” and finally loses his head to another Herod. Clarence the angel shows George Bailey how miserable Bedford Falls would be if he left to pursue his vainglorious dreams of fame and fortune; the Green Knight shows Gawain how miserable Camelot will be if he grasps for power and celebrity instead of giving his life away. He can become a tyrant who betrays the woman he loves and steals their son away from his mother, all for the sake of a crown, or he can become a martyr who lays down his life and asks for nothing in return.

Gawain makes the right choice: “I’m ready now,” he finally says, kneeling in the Green Chapel on Christmas morning. “Well done, my brave knight,” the Green Knight commends him, echoing the words of Christ: “Well done, thou good and faithful servant… enter thou into the joy of thy lord.”

The Green Knight concludes with the cheery tune “Be Merry, Swete Lorde,” which is not dark irony but simple truth: we can only begin to truly make merry after we have died unto sin and risen unto God through Christ our Lord. If thy head offend thee, let Him cut it off.