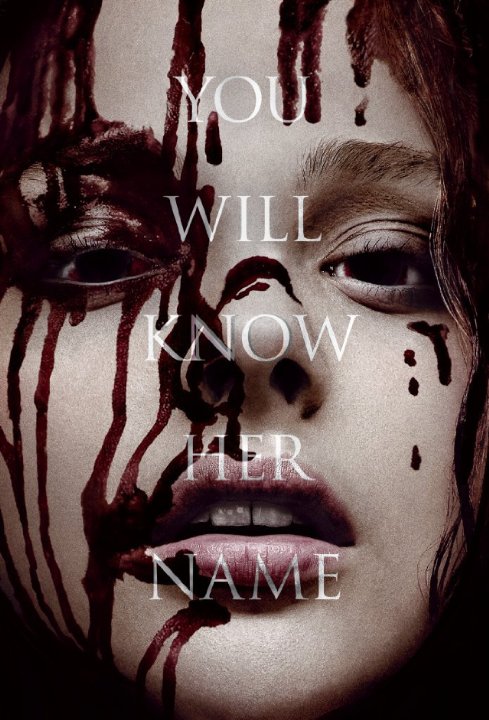 Status
You can only push someone so far before they break. Based on the Stephen King novel of the same title, Carrie (2013) is a suspenseful and horrific tragedy about a teenage girl who is tortured her entire life by her psychotic mother and relentless peers and ultimately destroys herself and her community with her inherited telekinetic superpowers. From the moment she was born, Carrie White (Chloe Grace Moretz) has internalized abuse and self-deprecation. In the opening scene, Carrie’s mother Margaret White (Julianne Moore) cries out from “cancer” pains just before giving birth to a baby girl whom she almost decides to “give back to the Lord” with the same pair of scissors she later uses to cut the umbilical cord. The innocent gaze of the infant, however, actually persuades Margaret to disregard her alleged Abrahamic test of faith and preserve Carrie’s life. The rest of Carrie’s upbringing is shaped by her religiously fanatical mother who preaches to her about the curse of Eve, compels her to wear stiff, homemade dresses, and habitually locks her daughter in a dark prayer closet to contemplate her own wickedness. The Biblical imagery continues throughout the story in an overt and nearly systematic fashion. The beginning of the film reveals a crucifix dripping with blood in the back of Carrie’s prayer closet. Near the end of the film, Carrie’s mother dies in a cruciform position on the door of the same prayer closet. Carrie herself becomes a Samson figure initially alluded to when she recites a portion of “Samson Agonistes” by John Milton in class and near the end of the film when she causes the walls of her house to collapse on herself. Perhaps the most powerful theme of all is blood. Blood is messy, carnal, and wicked. Carrie enters the world on bloody sheets, discovers her telekinesis at the same time as her menstrual cycle, is humiliated at prom by a bucket of pig’s blood, and wreaks bloody havoc first on her entire school and then on her mother. When Carrie finally has the opportunity to attend prom with her dream date and Margaret warns her about the sensual snares of young men, Carrie responds with, “I have to try to be a whole person before it’s too late.” This is a story about a girl’s tragic transformation from victim into vanquisher, but the real conflict is between Margaret’s twisted spirituality and the inherent goodness of creation. Blood is depraved rather than life giving and Eucharistic. The real tragedy is that Gnosticism wins. In a tragedy such as Carrie, who exactly is the hero or heroine? Who walks away from the story changed or transformed? Carrie’s gym teacher Ms. Desjardin (Judy Greer) appears to be Carrie’s first and only advocate who defends her from the female bullies, yet she seems to pity Carrie in the same way that she might pity a deformed cat. On the surface, Carrie’s date Tommy Ross (Ansel Elgort) appears to be some sort of heroic figure when he asks her to the prom, yet he does so out of obligation to his girlfriend’s wish to atone for her sins and eventually dies an accidental death by the hand of his peers. We might even nominate Carrie herself as a heroine who sacrifices her life after realizing how much harm her powerful gift has caused the world, but the scene right before her death reveals that Carrie’s self-sacrifice was really an act of despair. When popular classmate and former bully Sue Snell (Gabrielle Wilde) is convicted of her behaviors, she does everything in her power to make things right for Carrie, including her decision to miss senior prom and allow Carrie to enjoy an evening with her boyfriend instead. Even after Carrie has unleashed all of her bottled up wrath upon her school, Sue finds Carrie alone in her house with her dead mother and extends her hand in compassion: “Give me your hand, I can help you.” Carrie, however, chooses to reject this last glimmer of hope and pushes Sue out of the house right before it collapses. At the end of the film, Sue leaves a single white rose at Carrie’s grave. If there is a tragic hero, it is Sue. Carrie (2013) is a fresh, spellbinding depiction of all the thrill, spectacle, and terror projected in the Stephen King novel of the same title. Despite the lack of any real comparison between this cinematic remake and previous versions of the film, Carrie is at the very least a crude tragedy peppered with bloody violence and religious imagery about a maltreated girl who gets back at the world, and at the most an insightful contemplation on the human psyche, the tragedy of Gnosticism, and hope for the penitent.