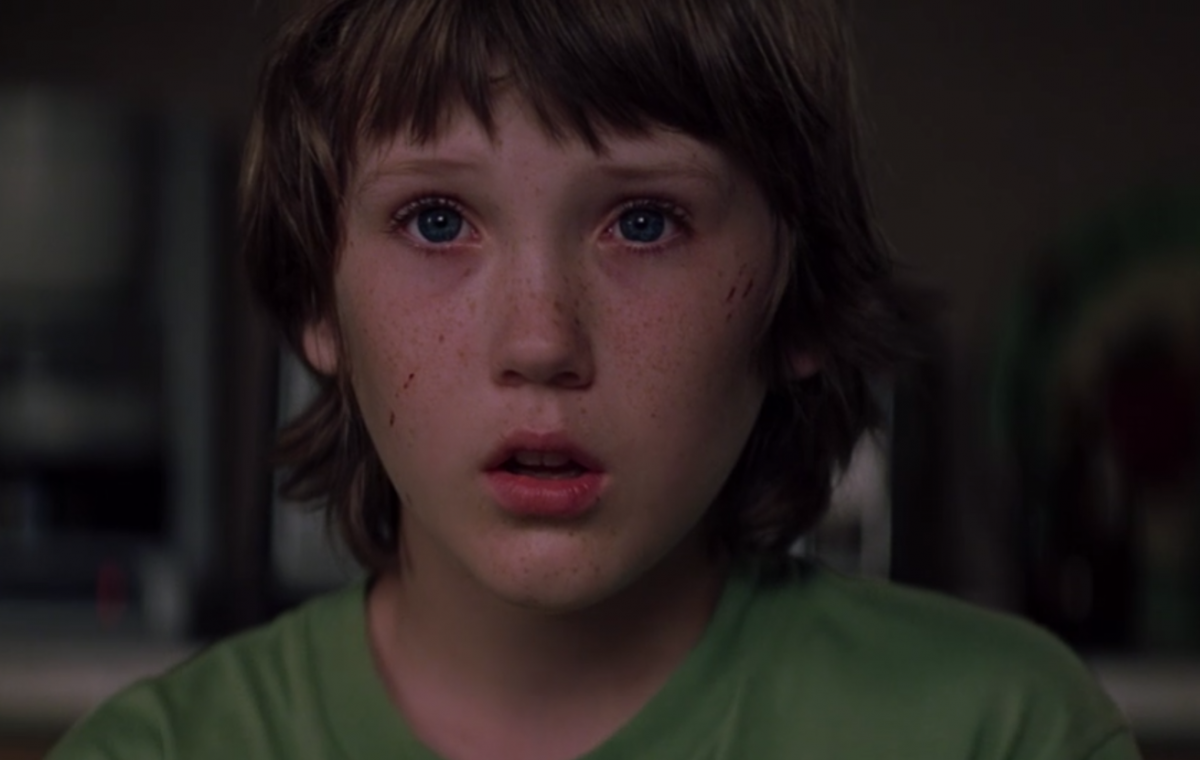 The father/son movie is practically a genre unto itself. For heaven’s sake, all of Star Wars could plausibly be described as a story about fathers and sons; even the spin-offs, every one, are rife with surrogate dads. Touching father/son scenes in films are a dime a dozen, and because I am a total sap, I cry at most of them. Nonetheless, few move me as deeply as a particular scene near the end of M. Night Shyamalan’s masterpiece, Unbreakable.

The film centers on David Dunn (Bruce Willis), the sole survivor of a catastrophic train accident, who gradually discovers he is possessed of superhuman powers. Though this sounds like the plot of a boilerplate comic book movie, such a description is deceptive. The film unfolds its story patiently, thoughtfully, intimately, and although a supervillain is unveiled before the end credits roll, the central drama is really about mundane, human matters like domestic reconciliation and finding one’s vocation. It is a superhero movie without spectacle; the big action climax is a thirty-second scuffle between two men in a bedroom.

His alliterative name recalls Clark Kent, Peter Parker, Bruce Banner, and he is played by the leading man from Die Hard, but nothing about David suggests heroism. Willis plays him glumly, tiredly: here is a man sleepwalking through life. We first meet him slipping his wedding ring into his pocket when an attractive woman chances to sit next to him on a train, but we quickly glean from his awkward flirtations that he is not a practiced philanderer, and so we find ourselves in a difficult position: we disapprove, yet at the same time, we pity him. As the film goes on, we find that David has largely abdicated his responsibilities as a husband and a father, but we sense that he is not callous or uncaring, merely exhausted and weary. His failures are not dramatic, but subtle and largely passive, which is to say they are profoundly relatable. He is not an especially good man, but neither is he an especially evil man; he could do better, would like to do better, but does not quite know how and is tired of trying.

Like many children, Joseph Dunn (Spencer Treat Clark) thinks of his father as a superhero. When Elijah Price (Samuel L. Jackson), a comic book collector named for an Old Testament prophet, hypothesizes that David might be a real life superhero, David is doubtful, skeptical, reluctant. For Joseph, though, it is confirmation of what he already knows – that his dad is special, profoundly special. In his first scene, Joseph is introduced in a green hoodie that foreshadows his father’s makeshift superhero costume, a green poncho. In one sense, Joseph looks up to David and wants to become like him, but in another sense, it is David who must become like Joseph: he must overcome his doubts and reclaim a childlike faith in the miraculous.

Elijah and David, meanwhile, are distinguished by their different attitudes towards children. In the film’s first scene, David smiles at a random child watching him on the train; later, his first act as a superhero is to save two children who have been imprisoned by a home invader. Elijah, on the other hand, dislikes children. In fact, he hates them, because he was bullied as a child. His distaste for children comes out in his interaction with a potential customer at his gallery of comic book art. “You must think you’re in a toy store,” he berates the man, scornfully referring to his child of four as an “infant.” David was also bullied – a pair of children nearly drowned him when he was a boy – but, not coincidentally, it is a pair of children who later save him from drowning.

Moreover, it is Joseph, in many ways, who pushes David past the comfortable but stifling limits he has set for himself. First, despite David’s warning that it is “dangerous,” he surreptitiously adds weights to his father’s workout routine. (“That’s the most I ever lifted,” David observes.) Then, when David still refuses to believe he is a superhero, Joseph finds a gun in the house and, believing his father is invulnerable to bullets, threatens to shoot him to prove it. Once again, Joseph pushes David to show a new kind of strength, but not the kind he expects. We sense that David rarely or never chastises Joseph; even with a firearm pointed at him, his default strategy is to tell David to “listen to his mother.” When this does not work, though, David rouses himself to the paternal authority we have never seen him exercise previously:

Shortly after the scene with the gun, David accepts his role as a superhero; for the first time, he dons a costume, goes out at night, punishes the guilty and protects the innocent. He also reconciles with his wife, Audrey (Robin Wright). However, Joseph does not know this, and we can only assume that his father’s words are still ringing in his ears the next time they share a scene.

Joseph descends the stairs to the breakfast table to find his estranged parents sitting and talking amiably, intimately – something we understand he has not seen in a long time. Nonetheless, Joseph enters the scene warily, hesitantly, quietly – wondering, perhaps, if his father is still angry, or if his parents are truly reconciled. He sits down at the table, once again wearing green, his father’s superhero color, and pours himself a glass of orange juice.

At this point, Shyamalan’s camera adopts Joseph’s perspective. The shot focuses on the glass of orange juice; Joseph is staring at it, perhaps unwilling to meet the eyes of either of his parents. Slowly, silently, a newspaper enters the frame; David is sliding it across the table. The camera moves up, tentatively, past the contents of the table, to focus on Willis’ face. David inclines his head slightly, almost imperceptibly, directing Joseph’s attention to the newspaper.

The headline simply reads, “SAVED.” The story on the front page describes David’s exploits of the previous night; the pencil sketch of the “unknown hero” looks rather like a square-jawed character from a comic book. The image recalls the artwork that Elijah’s customer wanted to buy for his child; Elijah, ironically, would likely be disgusted by the idea of David becoming a superhero to impress his son. “You were right,” David mouths, and Joseph, staring at his father in awe, begins to cry:

David shakes his head and puts a finger to his lips: Your mother doesn’t know. Joseph nods and wipes the tears from his eyes. The look David gives him then, with tears sparkling in his own eyes, is one of the most tender looks an onscreen father has ever given his son:

The scene is virtually wordless and lasts about two minutes. It could almost be better described as a moment than a scene. On a first or second or third viewing, the viewer is apt to gloss over it, for the following five minutes of the film, with their twist ending, are apt to overshadow the quieter resolution of the domestic drama. Nonetheless, allow me to suggest that this is the true emotional climax of the film. By taking up his responsibilities, David is fulfilling his vocation as a husband, a father, a hero. He has grown into the man he is meant to be, the man Joseph always believed he could be. When they look at each other across the breakfast table, the father shows himself to the son as he really is and the son’s faith in his father is vindicated, rewarded.