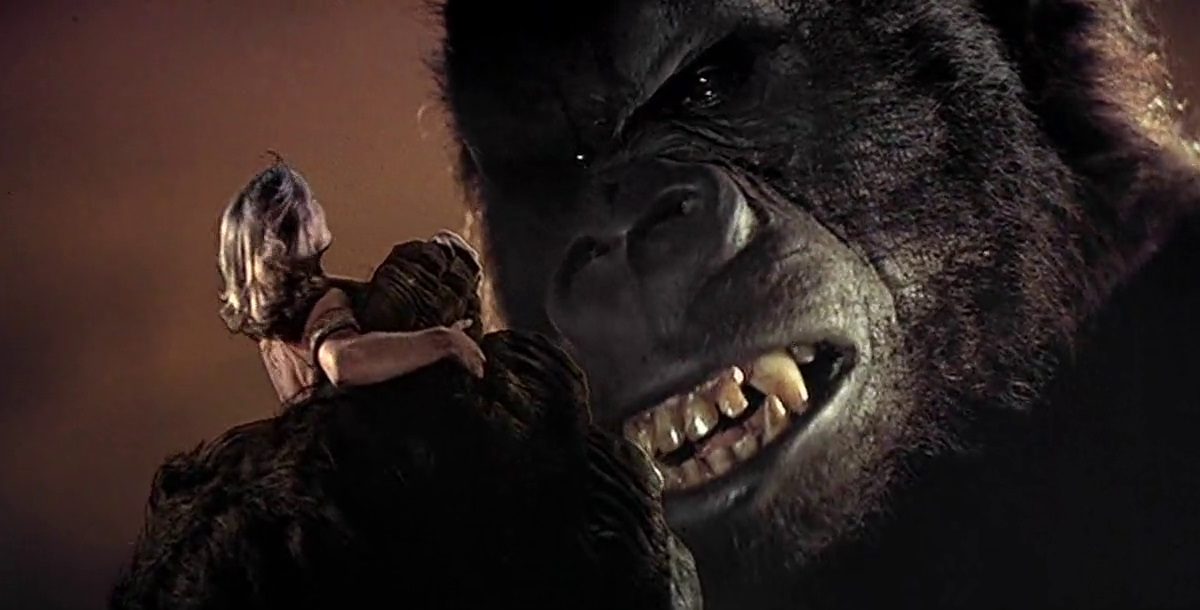 Why go to the trouble of flying all the way to New York City just to see the Metropolitan when you can order a book which features highlights from the museum collection and enjoy it at home? Or, cheaper yet, just browse the Met website for a few hours?

In the last five years, I have taken three classes of high school students to see the Met. In the months prior to the trip, we’ve looked at key works in the Met collection on slides in preparation for seeing those pieces in person. The week before the trip, I try to explain how the museum experience will be different than the digital experience.

“When we’re at the Met and you’re standing in front of Van Gogh’s ‘White Field With Cypresses’, you could run at the thing and smash it with your first if you really wanted to. Can’t do that on the Met website.”

A digital reproduction won’t be the same size as the original and all the colors will be different (or wrong), and the texture of the paint (especially a Monet, say) will be flattened into two dimensions— and all of this makes the experience of seeing something online not much of an experience at all. However, the most disenchanting aspect of the digital reproduction, at least for me, has always been that a digital reproduction couldn’t be secretly touched when the guards aren’t looking. A digital reproduction isn’t fragile and it doesn’t require care. It won’t accidentally fall off the wall. You couldn’t destroy it and you couldn’t keep someone else from destroying it if they tried.

The argument for seeing things in person doesn’t much depend on beauty, but being. For now, any painting is better in person than in a reproduction, but I am quite sure science and technology will take care of that soon enough. When that day comes, we will need Robert Farrar Capon’s instructions for cutting up an onion:

Once you are seated, the first order of business is to address yourself to the onion at hand… You will note, to begin with, that the onion is a thing, a being, just as you are. Savor that for a moment. The two of you sit here in mutual confrontation. Together with knife, board, table, and chair, you are the constituents of a place in the highest sense of the word. This is a Session, a meeting, a society of things. You have, you see, already discovered something: The uniqueness, the placiness, of places derives not from abstractions like location, but from confrontations like man-onion.

Just as Capon’s onion is a thing, so the painting at the Met is a thing, as well. I don’t mean that an image of a painting is not real, but that the image is the antitype which depends on the type, and ours is a generation which has become so enamored with antitype, we scarcely acknowledge the existence or necessity of type. At the Met, the viewer may stand before Van Gogh’s “White Field With Cypresses” and confront it man-painting. The viewer may look at the same digital reproduction of the image and confront it, as well, though it is not an encounter with a painting. The digital image risks less and offers less than the original. You could leave the digital image alone with a toddler and not worry much. The digital antitype is far safer, cleaner and less demanding than the paint and canvas type.

While the CG monster and the rubber suit monster are likewise presented to a filmgoer as an image, I can’t think of many CG monsters that have the capacity to draw out terror or sympathy. With very few exceptions, CG monsters are impressive for their day, not for their quality. Speaking to teenagers, adults comment that The Polar Express was “really amazing back in 2004,” though the quality of the CG would barely pass muster for a cheap Hyundai commercial today. The scene where a hundred Agent Smiths battle Neo on a playground in The Matrix Reloaded was billed a game changer a decade back, but seems helplessly cartoonish today. The problem with the CG monster is that, even at best, it is supposed to look real, but we know it is not. On the other hand, the rubber suit monster is supposed to look like a monster, and it does. Verisimilitude is not much an interest of the makers of the rubber monster.

With the end of the Hays Code in 1968 came an increased desire for realism in storytelling. The end of the Hays Code was inevitable, though, given other cultural trends in America. Any nation which allows for the proliferation of hardcore pornography and instantaneously destroys densely populated cities (the pregnant woman evaporated just as surely as the combatant soldier) is a nation which chiefly values absolute certainty. The fireworks in To Catch A Thief no longer sufficiently confirm our suspicions that the characters are making love. We now require penetration shots that would hold up as evidence in a court of law. It is not surprising that in 1960, when the Hays Code was still enforced, only 20 adult movie theaters operated legally in the United States. In 1970, about a year after the end of the Hays Code, more than 700 were in operation.

Likewise, in the 1950s, Americans were content that a character shot in the gut was dead. Today, we want forensics. We want intestines spilling out on Omaha Beach. Demands for realistic sex coincide with demands for realistic violence, even though we’re still willing to watch Nazis speak perfect English and for Pocahantes to look like a lingerie model. We’re selective about our demands for realism. We like realism when it panders to the eyes. When realism fails to titillate, we forgive the world of make believe.

In 1986, Aliens won the Academy Award for Best Visual Effects, and was the last film to feature to do so with rubber suits. Three years later, The Abyss took home the award and we haven’t often gone back to the rubber suit since. Why make a dragon out of pixels instead of rubber? The assumption seems to be that a pixelated dragon is more terrifying because it appears more real, more possible. The CG dragon can also interact with CG landscapes in a way the rubber dragon cannot. What exactly do we mean, though, when we say a CG dragon looks “more real” than a rubber dragon?

Perhaps monkeys are better fodder for this conversation than dragons, though. The Best Visual Effects award grew out of the 1933 production of King Kong. The visual achievements of that film prompted the Academy to create the award, which was later won by John Guillermin’s King Kong in 1976, and again by Peter Jackson’s King Kong in 2005. Consider the difference between the three brutes. In 1933, filmgoers saw this:

I feel more than within my rights to claim the 2005 Kong is the least realistic of them all, though my contention that rubber monsters are superior in every way to CG monsters doesn’t depend on them looking more lifelike. When viewers watch the 1976 version of King Kong, they know that a living human being has donned a suit and is pretending to taunt and terrify a fragile woman. On some level of consciousness, not too far beneath our suspension of disbelief, we know that the man in the rubber monkey suit could, if he chose, physically attack actress Jessica Lange. When we watch Aliens, we know that Sigourney Weaver could physically harm the man in the rubber alien suit and that he could physically harm her, if he chose.

More than this, we know that the man in the rubber monkey suit, or rubber alien suit, or the Freddy Krueger makeup, is pretending to be a monster. A rational adult, with a car and a credit card and a mailing address, woke up in the morning and drove to the studio, greeted other actors, had a poppy seed muffin and a cup of Maxwell House from the catering table, then went to makeup and emerged an hour later to spend the rest of the day pretending to slaughter and dismember other rational adults and/or beautiful young people. The man in the suit would, presumably, be a little traumatized by this even after the production ended. If the hero of the film wanted to win the day, he would have to pretend to kill the man in the suit and the man in the suit would have to pretend to die. The rubber monster suit is not so much costuming as it is ceremonial garb. An actor wearing a business suit is not pretending to be a businessman in the same way a man in a demon suit is pretending to be a demon. The demon suit is a complete change of visage, a distortion of the features, and calls for a distortion of behavior on the part of the actor. We have all met businessmen and housewives and soldiers, and an actor wearing the clothing of a businessman or a housewife will behave in a familiar way. But we have not met demons, and a man dressed as a demon and directed to behave demonically will be a physical and intellectual shock to the audience in a way a digital image will not. The digital demon is sterile, created and animated in a computer lab by paid digital technicians drinking coffee, none of whom had to transform themselves. The actress who screams at a green screen is pretending nothing is something; the actress who screams at a man in a rubber suit is pretending something is something else. The transformation inherent in the latter will always terrify more deeply than the CG fiat monster. Anymore, I have a hard time watching actors work with a green screen and thinking of it as anything other than millionaire celebrities pretending to scroll through a very large sci-fi webpage. The actor who cowers in the presence of the Predator, however, has something in common with the devotees of a pagan animist cult who pantomime the cosmic saga of birth and death as they retreat from a priest wearing a rhino mask. From a five senses standpoint, both actor and worshipper have staged a ritual encounter with the world beyond. There is nothing abstract about either, but the confrontation of man-demon.

While we insist the CG monster is “more real” than the man in the suit, overexposure to the digital and virtual has left us baffled and confused as to the nature of reality. The real and the unreal have slowly become inverted to such a point we think religion is fake, old things are shallow. There are true things a red corn syrup gore fest from the 1970s could teach us about the Incarnation which we’ve abandoned for the gnostic world of the green screen.